If two triangles are similar it means that:

However, in order to be sure that two triangles are similar, we do not necessarily need to have information about all sides and all angles.

What is SSS similarity criterion?

This essentially means that any such pair of triangles will be equiangular(All corresponding angle pairs are equal) also. Consider the following figure, in which the sides of two triangles (\(\Delta ABC\) and \(\Delta DEF\)) are respectively proportional: 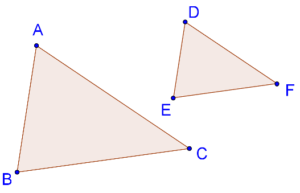 That is, it is given that:

Can we say that these two triangles will be equiangular? The SSS criterion says that we can. Indeed, if we measure the angles in each triangle, we will find this to be true, as the following figure shows: 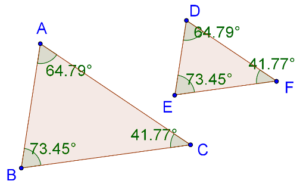 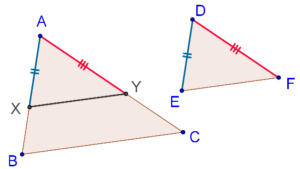 Proof: It is given that

Using the converse of the BPT(If a line divides any two sides of a triangle in the same ratio, then the line must be parallel to the third side), this implies that \(XY\parallel BC\). Thus, \(\Delta AXY\) ~ \(\Delta ABC\). This further means that:

But we also have:

Now, by the SSS congruence criterion,

This concludes our proof.

Challenge: The dimensions of \(\Delta ABC\) and \(\Delta DEF\) are as follows:

Are they similar? If yes, by which criterion?