Now, let us discuss a rigorous proof of the RHS criterion. Suppose that ∆ABC and ∆DEF are two right-angled triangles (right-angled at B and E respectively) such that AC = DF and AB = DE, as shown below: 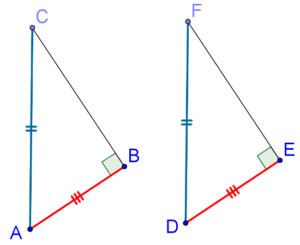 Through A, draw AG (where G lies on BC) such that ∠BAG = ∠D, as show below: Consider ∆AGC for a moment. We have shown that AG = AC, and thus the angles opposite these equal sides must be equal:

However, we notice that ∠AGC is obtuse (it is the exterior angle for the right-angled ∆ABG). This would mean that we have two obtuse angles (∠AGC and ∠ACG) in the same triangle (∆AGC). Is this possible? Of course not!

Thus, our original assumption that ∠A ≠ ∠C is incorrect. The two angles are equal, and hence ∆ABC ≡ ∆DEF by the SAS criterion.

Example 1: If two triangles are congruent, prove that their respective

(a)  medians are equal

(b)  angle bisectors are equal

Solution: Although these results might seem obvious, let us still go ahead and prove them rigorously.

(a) In the following figure,  \(\Delta ABC \cong \Delta DEF\) and AX and DY are a pair of (respective) medians, as shown:

Clearly \(\Delta ABX \cong \Delta DEY\) by the SAS criterion, so that AX = DY. Similarly, the other pairs of medians (respective) will be equal.

Thus, AX = DY. Similarly, the other pairs of respective angle bisectors will be equal.

(c) In the following figure, AX and DY are the altitudes in (congruent) \(\Delta ABC\) and \(\Delta DEF\)respectively:

These three results point to the fact that every parameter is (respectively) equal for two congruent triangles.

Solution:.  The answer to this problem might be evident to you directly. Consider the following figure: