Mean, Median and Mode: Understanding the relation between them

What is arithmetic mean?

To understand the concept of mean, median, and mode, the relationship between them, and the difference, we first need to know that these concepts form the part of measures of central tendency.

It refers to a single value that attempts to describe the characteristic of the entire set of data by identifying the central position within that set. It is sometimes also known as measures of central location. Colloquially, measures of central tendency often referred to only averages. But now we have a lot more than averages.

The concept of mean, median, and mode and their relationship is briefly explained in the below Downloadable PDF. Click on the download button to view this.

By ‘mean’ we refer to an Arithmetic mean. There are other types of ‘mean’ like geometric mean and harmonic mean which is out of the scope of this article.

The arithmetic mean refers to the average of a data set of numbers. It can either be a simple average or a weighted average.

To calculate a simple average, we add up all the numbers given in the data set and then divided by how many numbers there are.

Why do we need to analyze this relation?

It is important to understand the concepts and the relation between these terms so that we can apply them in real life for statistics and analytics. For example, How is math used in football?

So the arithmetic mean = 8.

To calculate the weighted average, we multiply the given numbers with the required weights and divide the result by the sum of the weights.

Median is the middle number of a given data set when it is arranged in either a descending order or in ascending order.

The amount of numbers in the data set is seven which is odd.

Therefore, the median is the number in the middle, which in this instance is 13.

The mode refers to the number that appears the most in a dataset. A set of numbers may have one mode, or more than one mode, or no mode at all.

Answer: The mode is 11 because 11 occurred more times than the other numbers.

So, as individually explained, these were some of the basic measures of central tendency. As you can see, there is a huge difference between mean, median, and mode.

Relationship Between Mean, Median, and Mode

We will understand the empirical relationship between mean, median, and mode by means of a frequency distribution graph. We can divide the relationship into four different cases: 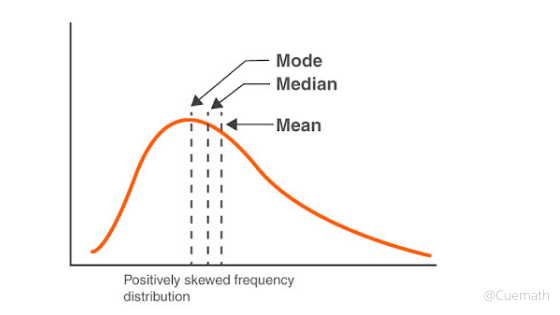 Let us continue understanding the relationship between mean, median, and mode formula with the help of an example.

Example: It is given that in a moderately skewed distribution, median = 10 and mean = 12. Using these values, find the approximate value of mode.

In statistics, Mean, Median, and Mode are typical values to represent a pool of numerical observations. They are calculated from the pool of observations.

How do you find the mean median and mode?

Arrange data points from smallest to largest and locate the central number. This is the median. If there are 2 numbers in the middle, the median is the average of those 2 numbers. The mode is the number in a data set that occurs most frequently.

What is a range in mean median mode?

A Range is a difference between two numbers.