Measures of central tendency describe a set of data by identifying the central position in the data set as a single representative value.

We come across new data every day. We find them in newspapers, articles, in our bank statements, mobile and electricity bills. Now the question arises whether we can figure out some important features of the data by considering only certain representatives of the data.

What Are Measures of Central Tendency?

Let us study about the measures of central tendency, their formulas, usage and types in detail below:
Mean

The mean (often called the average) is most likely the measure of central tendency that you are most familiar with. It is also known as average. Mean is simply the sum of all the components in a group or collection, divided by the number of components.

It is denoted by x̄, pronounced “x bar”.

Therefore, the average of the group:

Thus, the average weight of the group is 46 kilograms.

Let us now see how to calculate the mean for different types of data along with an example.

This formula is usually written in a slightly different manner using the Greek capital letter, ∑, pronounced "sigma", which means "sum of...":

You may have noticed that the above formula refers to the sample mean. So, why have we called it a sample mean? This is because, in statistics, samples and populations have very different meanings and these differences are very important, even if, in the case of the mean, they are calculated in the same way. To acknowledge that we are calculating the population mean and not the sample mean, we use the Greek lower case letter "mu", denoted as μ:

Find the mean of the following distribution:

When the items in a list are written in the form of a range, for example, 10-20, we need to first calculate the class mark.

Then, the mean can be calculated using the formula given below, where xi will be the classmark for each item.

In this case, we find the classmark (also called as mid-point of a class) for each class.

Hence, we get the following table

When not to use the mean

The mean has one main disadvantage: it is particularly sensitive to outliers. These are values that are unusually larger or smaller compared to the rest of the data. For example, consider the salary of staff at a factory below:

The mean salary for these ten staff is $30.7k. However, the raw data suggests that this mean value does not accurately reflect the typical salary of a worker, because most workers have salaries in the $12k to 18k range. Thus the mean is being skewed by the two large salaries. Therefore, in this situation, we would like to have a better measure of central tendency. As we will find out later, taking the median would be a better measure of central tendency in this situation.

The value of the middle-most observation that is obtained after arranging the data in ascending order is called the median of the data. The advantage of using the median as a central tendency is that it is less affected by outliers and skewed data. To calculate the median, let us suppose we have the data below:

Firstly, we need to rearrange that data into ascending order:

The median mark will be the middle mark - here, 56 (highlighted in bold). It is the middle mark because it lies in the exact center as there are 5 scores before it and 5 scores after it. This works very well when we have an odd number of scores, but what when we have an even number of scores? What if you had 10 scores? Well, then we simply take the middle two scores and find their average. Let us look at the example below:

Rearranging that data into ascending order:

Let us now learn how to calculate the median for different types of data along with a supporting example.

Step 1: Arrange the data in ascending or descending order.

Step 2: Let the total number of observations be \(n\).

To find the median, we need to consider if \(n\) is even or odd.

Step 1: Find the median class.
When the data is continuous and in the form of a frequency distribution, the median is found as shown below:

Note: Median Class is the class where n/2 lies.

f = frequency of the median class

Find the mode of the given data:

The value which appears most often in the given data i.e. the observation with the highest frequency is called the mode of data.

For ungrouped data, we just need to identify the observation which occurs maximum times.

For example in the data: 6, 8, 9, 3, 4, 6, 7, 6, 3 the value 6 appears the most number of times. Thus, mode = 6. An easy way to remember mode is: Most Often Data Entered. Depending upon the number of modes the data has, it can be called unimodal, bimodal, trimodal, or multimodal. The example discussed above has only 1 mode, so it is unimodal. Note: A data may have no mode, 1 mode, or more than 1 mode. 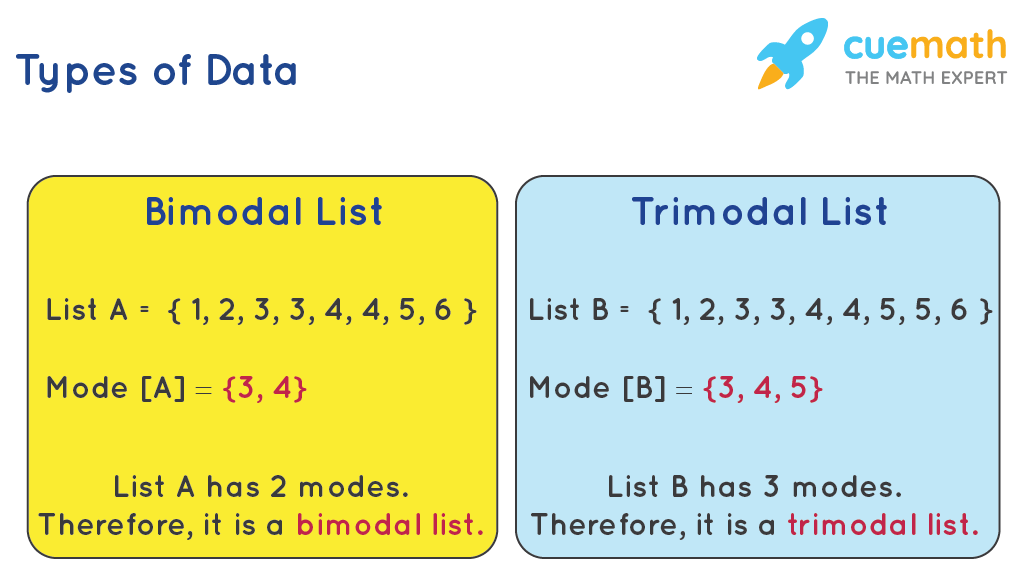 When the data is continuous, the mode can be found using the following steps:

Consider the following example to understand the formula.

Find the mode of the given data:

The three measures of central tendency i.e. mean, median, and mode are closely connected by the following relations (called an empirical relationship).

For instance, if we are asked to calculate the mean, median, and mode of continuous grouped data, then we can calculate mean and median using the formulae as discussed in the previous sections and then find mode using the empirical relation.

Example: We have data with mode 65 and a median of 61.6, then, we can find the mean using the above relation.

Difference between Mean and Average

The term average is frequently used in everyday life to denote a value that is typical for a group of quantities. Average rainfall in a month or the average age of employees of an organization are typical examples.

Most people use average and mean interchangeably even though they are not the same.

An average tends to lie centrally with the values of the observations arranged in ascending order of magnitude. So, we call an average measure of the central tendency of the data. Averages are of different types. What we refer to as mean i.e. the arithmetic mean is one of the averages. Mean is called the mathematical average whereas median and mode are positional averages. 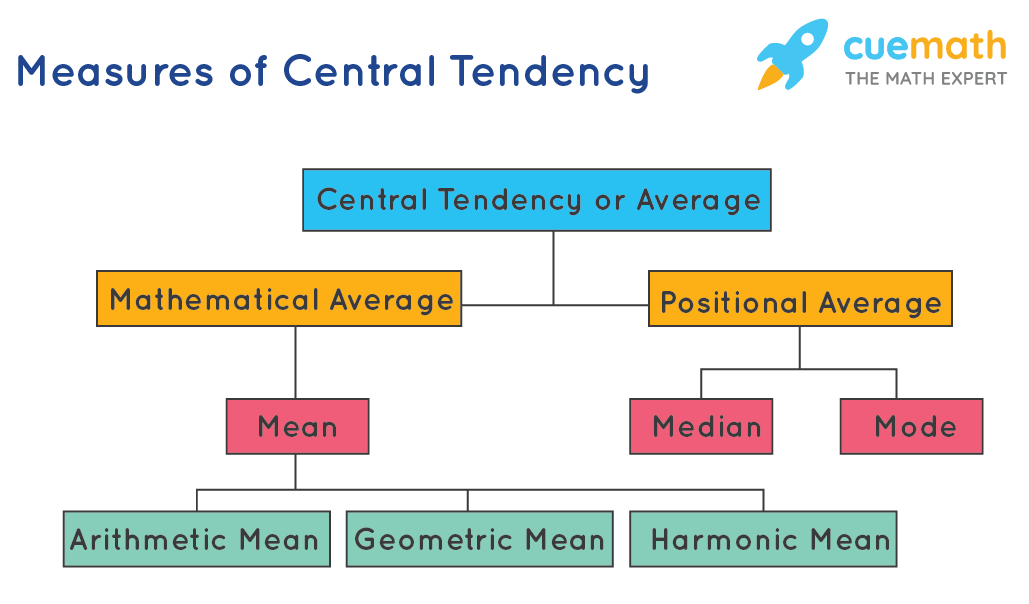 Difference between Mean and Median

A department of an organization has 5 employees which include a supervisor and four executives. The executives draw a salary of ₹10,000 per month while the supervisor gets ₹40,000.

Now let us compare the two measures of central tendencies.

We can observe that the mean salary of $16,000 does not give even an estimated salary of any of the employees whereas the median salary represents the data more effectively.  One of the weaknesses of mean is that it gets affected by extreme values. Look at the following graph to understand how extreme values affect mean and median: 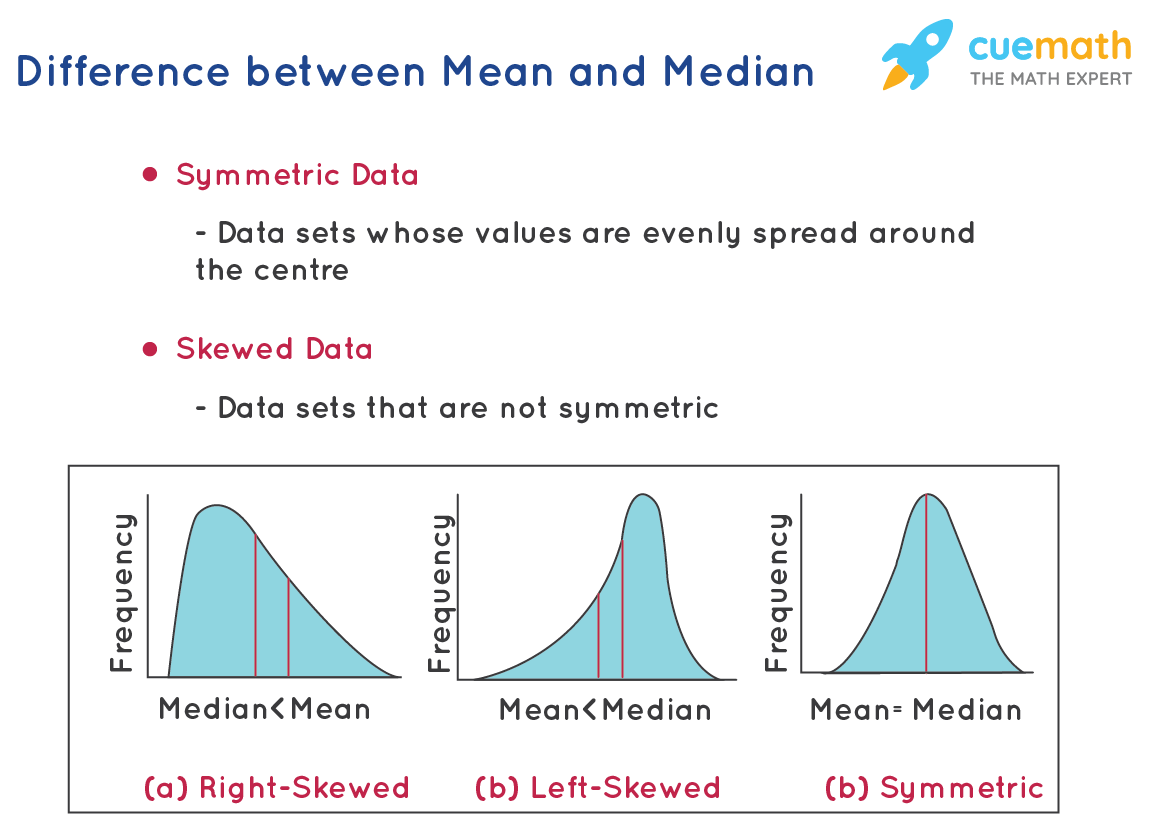 So, the mean is to be used when we don't have extremes in the data. If we have extreme points, then the median gives a better estimation.

Here's a quick summary of the differences between the two.

1. The three most common measures of central tendency are mean, median, and mode.

2. Mean is simply the sum of all the components in a group or collection, divided by the number of components.

3. The value of the middle-most observation obtained after arranging the data in ascending order is called the median of the data.

4. The value which appears most often in the given data i.e. the observation with the highest frequency is called the mode of data.

FAQs on Measures of Central Tendency

What Are the Measures of Central Tendency?

The most common measures of central tendency are the arithmetic mean, the median, and the mode.

What Are Measures of Central Tendency Examples?

Central tendency is a statistic that represents the single value of the entire population or a dataset. Some of the important examples of measures of central tendency include mode, median, arithmetic mean and geometric mean, etc.

What Is the Definition of Measures of Central Tendency?

What Are Good Measures of Central Tendency?

The mean is the most frequently used measure of central tendency because it uses all values in the data set to give you an average. For data from skewed distributions, the median is better than the mean because it isn't influenced by extremely large values.

Where Can We Use Measures of Central Tendency in Our Daily Affairs?

Central tendency is very useful in psychology. It lets us know what is normal or 'average' for a set of data. It also condenses the data set down to one representative value, which is useful when you are working with large amounts of data.

What Is the Difference Between Mean and Median as measures of Central Tendency?

The mean is the average (or arithmetic mean) of the values of a data set, whereas the median is the middlemost value of the data.

How Do you Find the Measures of Central Tendency?

The measures of central tendency can be found using the formulas of mean, median or mode in most of the cases. As we know, the mean is the average of a given data set, the median is the middlemost data value and the mode represents the most frequently occurring data value in the set.