We will be focusing here only on Arithmetic Mean. Let’s first understand the meaning of the term "Mean", followed by arithmetic with a few solved examples in the end.

What Is Arithmetic Mean?

Arithmetic mean is often referred to as the mean or arithmetic average. It is calculated by adding all the numbers in a given data set and then dividing it by the total number of items within that set. The arithmetic mean (AM) for evenly distributed numbers is equal to the middlemost number. Further, the AM is calculated using numerous methods, which is based on the amount of the data, and the distribution of the data.

Let's discuss an example where we find the use of arithmetic mean. The mean of the numbers 6, 8, 10 is 8 since 6 + 8 + 10 = 24 and 24 divided by 3 [there are three numbers] is 8. The arithmetic mean maintains its place in calculating a stock’s average closing price during a particular month. Let's assume there are 24 trading days in a month. How can we calculate the mean? All you need to do is take all the prices, add them up, and divide by 24 to get the AM. You can learn more about the difference between average and mean here.

The general formula to find the arithmetic mean of a given data is:

It is denoted by x̄, (read as x bar). Data can be presented in different forms. For example, when we have raw data like the marks of a student in five subjects, we add the marks obtained in the five subjects and divide the sum by 5, since there are 5 subjects in total.

Now consider a case where we have huge data like the heights of 40 students in a class or the number of people visiting an amusement park across each of the seven days of a week. 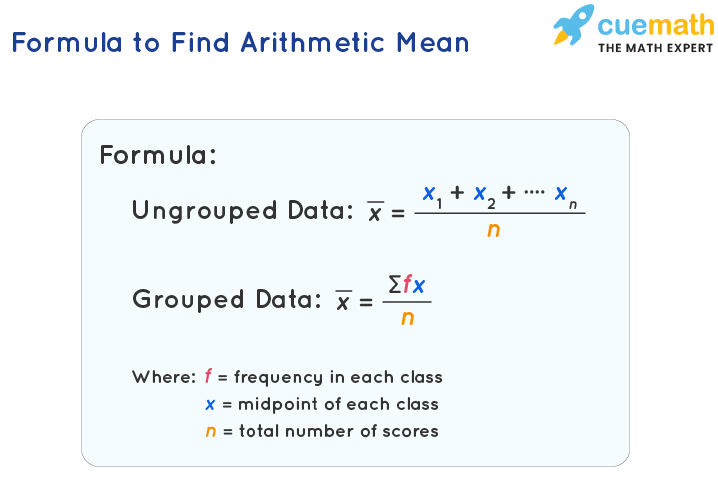 Let us have a look at some of the important properties of the arithmetic mean. Suppose we have n observations denoted by x₁, x₂, x₃, ….,xₙ and x̄ is their arithmetic mean, then:

Note: While dividing each value by k, it must be a non-zero number as division by 0 is not defined.

Here the arithmetic mean is calculated using the formula:

Thus, the arithmetic mean is 6.

There are three methods (Direct method, Short-cut method, and Step-deviation method) to calculate the arithmetic mean for grouped data. The choice of the method to be used depends on the numerical value of xi and fi. xi is the sum of all data inputs and fi is the sum of their frequencies. ∑ (sigma) the symbol represents summation. If xi and fi are sufficiently small, the direct method will work. But, if they are numerically large, we use the assumed arithmetic mean method or step-deviation method. In this section, we will be studying all three methods along with examples.

Then, mean is calculated using the formula:

Example I (discrete grouped data): Find the mean of the following distribution:

Now, use the mean formula.

Mean = 55. The above problem is an example of discrete grouped data.

Let's now consider an example where the data is present in the form of continuous class intervals.

When the data is presented in the form of class intervals, the mid-point of each class (also called class mark) is considered for calculating the mean.

The formula for mean remains the same as discussed above.

The short-cut method is called as assumed mean method or change of origin method. The following steps describe this method.

Step1: Calculate the class marks (mid-point) of each class (xi).

Step2: Let A denote the assumed mean of the data.

Step4: Use the formula:

Solution: Let us make the calculation table. Let the assumed mean be A = 62.5

Note: A is chosen from the xi values. Usually, the value which is around the middle is taken.

Now we use the formula,

This is also called the change of origin or scale method. The following steps describe this method:

Step 1: Calculate the class marks of each class (xi).

Step 2: Let A denote the assumed mean of the data.

Step 4: Use the formula:

Example: Consider the following example to understand this method. Find the arithmetic mean of the following using the step-deviation method.

The uses of arithmetic mean are not just limited to statistics and mathematics, but it is also used in experimental science, economics, sociology, and other diverse academic disciplines. Listed below are some of the major advantages of the arithmetic mean.

After having discussed some of the major advantages of arithmetic mean, let's understand its limitations.

Let us now look at some of the disadvantages/demerits of using the arithmetic mean.

☛Tips and tricks on arithmetic mean:

Given below is the list of topics that are closely connected to the arithmetic mean. These topics will also give you a glimpse of how such concepts are covered in Cuemath.

What Is Arithmetic Mean Definition?

The arithmetic mean is the simplest and most widely used measure of a mean, or average. It simply involves taking the sum of a group of numbers, then dividing that sum by the count of the numbers used in the series. For example, take the numbers 34, 44, 56, and 78. The sum is 212. To find the arithmetic mean we will divide the sum 212 by 4(total numbers), this will give us the mean as 212/4 = 53

How to Calculate the Arithmetic Mean?

How to Find the Arithmetic Mean Between 2 Numbers?

What Are the Types of Arithmetic Mean?

In mathematics, we deal with different types of means such as arithmetic mean, harmonic mean, and geometric mean.

What Is the Use of Arithmetic Mean?

The arithmetic mean is a measure of central tendency. It allows us to know the center of the frequency distribution by considering all of the observations.

What Are the Characteristics of Arithmetic Mean?

Some important properties of the arithmetic mean (AM) are as follows:

What Is the Sum of Deviations from Arithmetic Mean?

The sum of deviations from the arithmetic mean is equal to zero.

What is the Arithmetic Mean Formula Used for Grouped Data?

Then, arithmetic mean for ungrouped data is calculated using the formula:

What is the Arithmetic Mean Formula Used for Ungrouped Data?

Then, arithmetic mean for grouped data is calculated using the formula: