Example 1: Robert is the sales manager of a toy company. On checking his quarterly sales record, he can observe that by the month of April, a total of 83 toy cars were sold.

Note how the last cumulative total will always be equal to the total for all observations since all frequencies will already have been added to the previous total. Here, \( 83 = 20 + 30 + 15 +18 \)

Example 2: A Major League Baseball team records its home runs in the 2020 session as given below.

From the above table, it can be observed that the team made 29 home runs before playing in the finals.

Let us look at example to understand the two types.

Solution: We would have less than type and more than type frequencies as:

The following information can be gained from either graph or table

Step 1: The snow depth measurements range from 301 cm to 359 cm. To produce the frequency distribution table, the data can be grouped in class intervals of 10 cm each.

Step 3: The endpoint is the highest number in the interval, regardless of the actual value of each observation.

Step 4: The cumulative frequency column lists the total of each frequency added to its predecessor.

Using the same steps mentioned above, a cumulative frequency distribution table can be made as: 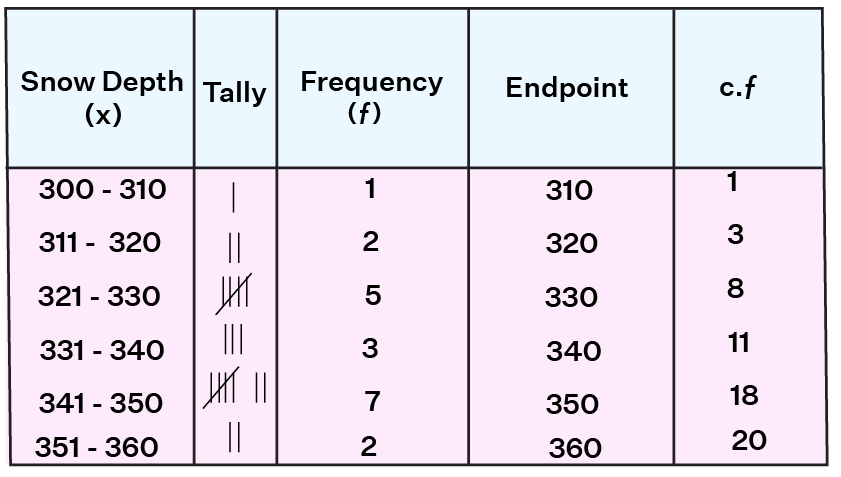 Example: Graph the two ogives for the following frequency distribution of the weekly wages of the given number of workers.

Less than curve or ogive:

Greater than curve or ogive:

A perpendicular line on the x-axis is drawn from the point of intersection of these curves. This perpendicular line meets the x-axis at a certain point, this determines the median. Here the median is 40. The median of the given data could also be found from cumulative graphs. On drawing both the curves on the same graph, the point at which they intersect, the corresponding value on the x-axis, represents the median of the given data set.

The less than and greater than ogives shown in the graph below. 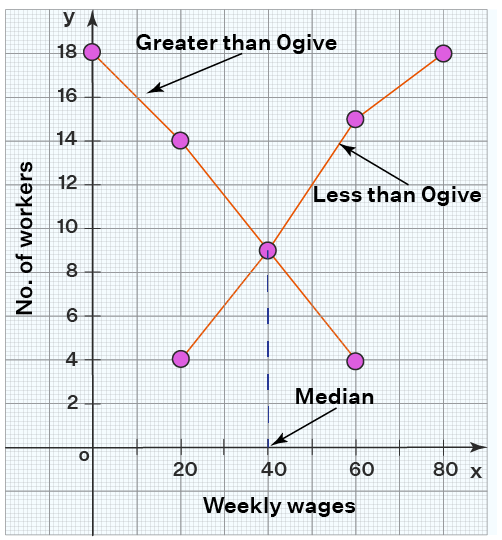 Relative cumulative frequency graphs are a type of ogive graphs that showcases the percentile of the given data. The ogive shows at what percent of the data is below a particular value. In other words, relative cumulative frequency graphs are ogive graphs that show the cumulative percent of the data from left to right. The two main aspects of this type of graph are, it shows the percentile and indicates the shape of the distribution. Percentiles is the data that is either in the ascending or descending order into 100 equal parts. It indicates the percentage of observations a value is above. Whereas a shape of the distribution helps in transforming observations using standard deviations to see how far specific observations are from the mean. One observation can be compared to another by standardizing the dataset. This particular aspect is widely used in statistics. Let us look at an example:

Example: A car dealer wants to calculate the total sales for the past month and wants to know the monthly sales in percentage after weeks 1, 2, 3, and 4. Create a relative cumulative frequency table and present the information that the dealer needs.

First total up the sales for the entire month:

Then find the relative frequencies for each week by dividing the number of cars sold that week by the total:

To find the relative cumulative frequencies, start with the frequency for week 1, and for each successive week, total all of the previous frequencies

To learn more about the cumulative frequency, check the given articles.

What is Meant by Cumulative Frequency?

How Do You Calculate Cumulative Frequency?

How Many Types of Cumulative Frequency are There?

How Do You Solve for More Than Cumulative Frequency?

It is obtained by finding the cumulative total of frequencies starting from the highest to the lowest class. It is also called more than type cumulative frequency.

What is a Cumulative Frequency Series?

Cumulative frequency series is the series of frequencies that are continuously added corresponding to each class interval.

How Do You Plot Cumulative Frequency?