Sigma notation is used to write a very long sum (of elements) in a very concise manner. It is NOT used for writing any sum, rather it is the more convenient way of writing the sum of elements that follow a pattern. Sigma notation is referred to as a function as it does a job of adding terms.

Let us learn more about sigma notation along with how to write it using sigma symbol. Let us see the useful formulas that are related to summation.

What is Sigma Notation?

Sigma notation is the most easiest way of writing a very large sum of elements of a sequence in a simple manner. We know that a sequence is a collection of terms that follow a pattern and sigma notation is used to represent the sum of such elements. This is also known as summation notation as it represents a sum. The terms that are being added in sigma notation are called "summands" or "addends". For example, if we want to write the sum 2 + 4 + 6 + ... + 50 (i.e., the sum of the first 25 even natural numbers) then we can write this sum easily using the sigma notation as \(\sum_{i=1}^{25}\) 2i. This is read as "sigma/summation of 2i where i goes from 1 to 25". Writing the sum using the summation notation was possible because the numbers 2, 4, 6, ..., 50 were following a pattern (or) they belong to the sequence {2i} \(_{i=1}^{25}\). In this notation, 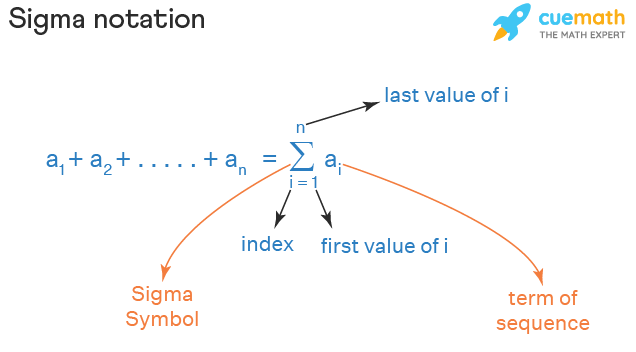 How to Write Sigma Notation?

From the above example, you might already have got an idea about how to write the sigma notation. Here are the steps in detail for writing the sum of terms as summation notation.

Note that the sigma notation is used to write a sum only when the terms of the sum follow a pattern. Any random sum, say 2 + 3 + 7 + 25 + 51, cannot be written using the sigma as we cannot find a general term in this case. Here is an example.

How to Expand Summation Notation?

Expanding the summation notation is just the opposite process of writing it. Here are the steps for writing the same.

Expanding the sigma notation helps us to verify whether we have written the notation correctly. 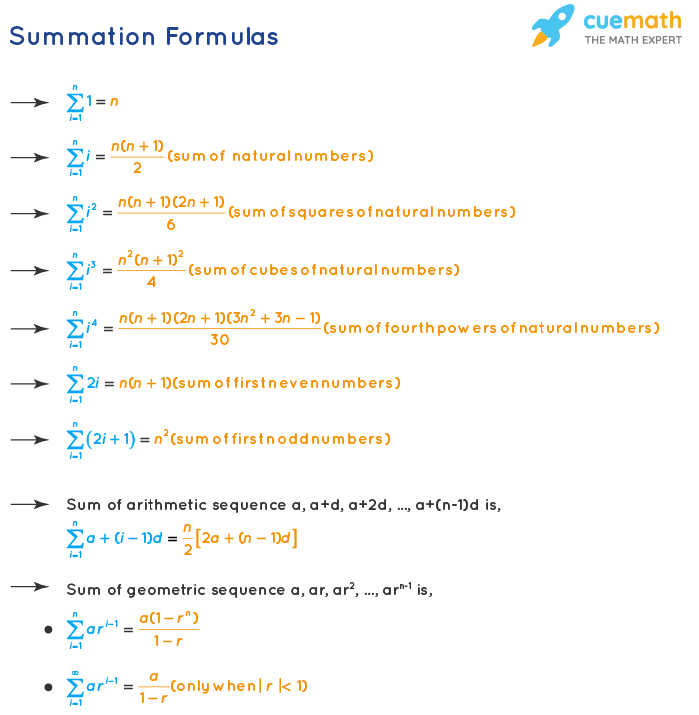 What is Summation Notation?

What is Sigma Symbol in Math?

Sigma symbol is math is a Greek alphabet called "∑" and is read as "sigma". It looks like capital E in the English alphabet. The Sigma symbol is also known as the summation symbol. It is used to write the sum of elements of a sequence.

How Do You Write Sigma Notation Step by Step?

What is Sigma Notation Used For?

How Do You Find Sigma in Math?

What is Sigma Notation Formula?

Though formulas are not available to find any type of sigma notations, there are some popular formulas that are helpful to evaluate the summations:

What are the Properties of Summation Notation?

Here are some important properties of sigma notation:

How Do You Evaluate Sigma Notation?