Sequences in math are a list of elements (numbers most of the time) in which the order of elements matters. Here, the elements follow a specific pattern. We come across sequences in many places in real life. For example, the house numbers in a row, salary in successive years (by a fixed amount or a by a fixed percentage), page numbers of a book, etc represent sequences.

Let us learn more about sequences along with their types, rules, formulas, and examples.

What is a Sequence?

A sequence is a list of numbers (or elements) that exhibits a particular pattern. For example, Olivia has been offered a job with a starting monthly salary of $1000 with an annual increment of $500. Can you calculate her monthly salary in the first three years? It will be $1000, $1500, and $2000. Observe that Olivia's salary over a number of years forms a sequence as they follow a pattern where the numbers are increasing by an amount of $500 every time.

Order of the Sequence

The above sequence is in ascending order as its terms are "increasing" by 2.

The above sequence is in descending order as its terms are "decreasing" by 4.

Types of Sequences in Math 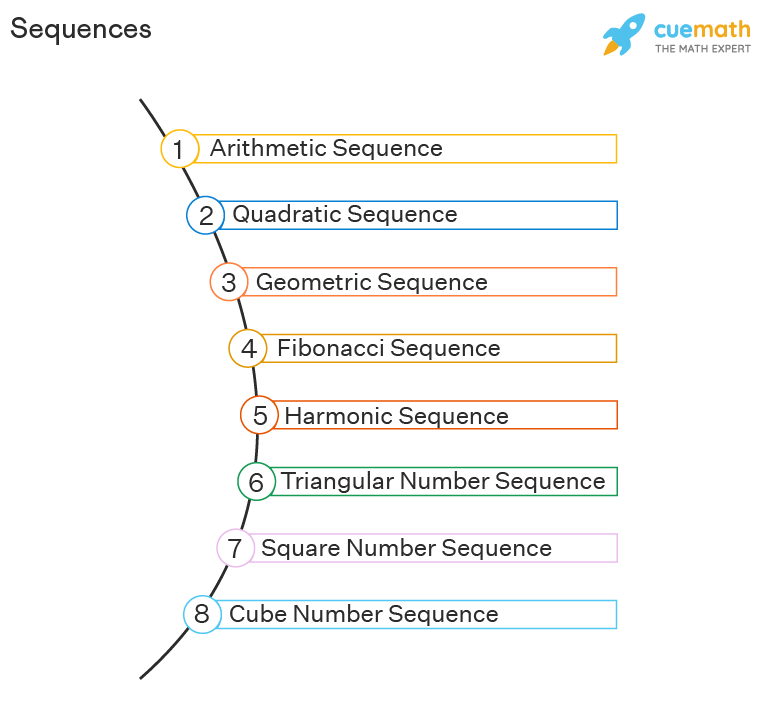 We will discuss these sequences in detail.

Example: Mushi put $30 in her piggy bank when she was 7 years old. She increased the amount on her each successive birthday by $3. So, the amount in her piggy bank follows the pattern of $30, $33, $36, and so on. The succeeding terms are obtained by adding a fixed number, that is, $3. This fixed number is called a common difference. It can be positive, negative, or zero.

Example: The sequence 1, 2, 4, 7, 11, ... is a quadratic sequence because their second differences are the same. Take a look at the figure below. 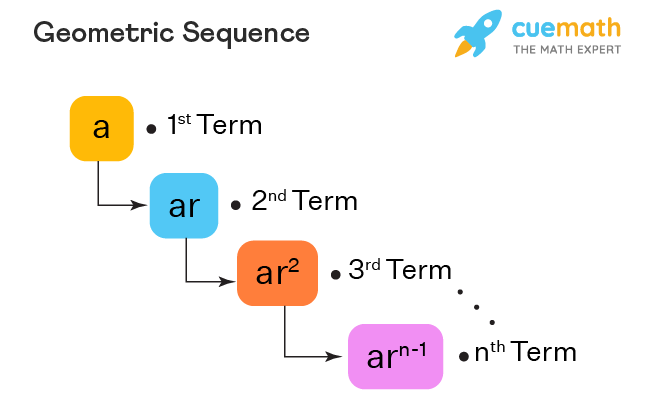 A harmonic sequence is a sequence obtained by taking the reciprocal of the terms of an arithmetic sequence.

A triangular number sequence is a sequence that is obtained from a pattern forming equilateral triangles. Look at the figure below.

A square number sequence is a sequence that is obtained from a pattern forming squares. Look at the figure below.

A cube number sequence is a sequence that is obtained from a pattern forming cubes. Look at the figure below.

Fibonacci sequence is a sequence where every term is the sum of the last two preceding terms.

Example: A pair of rabbits do not reproduce in their 1st month. Starting from the 2nd month and every subsequent month, they reproduce another pair. Thus, the number of rabbits starting from 1st month are 0, 1, 1, 2, 3, 4, 7, 11, .... This is called the Fibonacci sequence.

Series and Partial Sums of Sequences

We can generally have two types of rules for a sequence (if it is geometric/arithmetic).

Here, an = a + (n - 1) d is the formula for nᵗʰ term of the arithmetic sequence. Let us see more formulas of different types of sequences in the upcoming section.

It is very clear that the sequence does not belong to any of the sequences that we have mentioned in the previous section. So let us observe the terms. We can see that:

What is the Definition of Sequence?

A sequence is an ordered list of elements with a specific pattern. For example, 3, 7, 11, 15, ... is a sequence as there is a pattern where each term is obtained by adding 4 to its previous term.

What are 4 Types of Sequences?

What is the Formula of Sequence?

The general term (or) nth term defines a sequence. If a sequence belongs to specific types like arithmetic, geometric, etc, then we have formulas to find the general term of the respective sequence. Otherwise, one has to observe the numbers of the sequence to identify the pattern. For example, the sequence 1, 27, 125, ..., does not represent any type of sequence but one can notice that it represents the cubes of odd natural numbers.

Since every term is obtained by adding 13 to its previous term, it is an arithmetic sequence (which is also known as arithmetic progression).

How to Construct an Arithmetic Sequence?

Follow the steps mentioned below to construct an arithmetic sequence.

How to Construct a Geometric Sequence?

Follow the steps mentioned below to construct a geometric sequence.

What is the Difference Between a Sequence and a Series?

A sequence is a collection of elements that are arranged according to a specific pattern whereas a series is the sum of a few or all elements of the sequence.

How to Find the Sum of Infinite Sequences?

The sum of all infinite sequences may not exist. But we can find the sum of infinite geometric sequence only when its common ratio (r) is less than 1. If its first term is a, then the sum of its infinite terms is a / (1 - r).