Ascending order refers to the arrangement of numbers or other items in increasing order from smallest to largest. Numbers that we see on a number line from left to right is an example of ascending order. We usually represent it by putting commas between numbers or by using 'less-than symbol (<)' between numbers. For example, 1, 2, 3, 4, 5 or 1 < 2 < 3 < 4 < 5.

Have you ever come across situations where you have so many important folders/files/documents that may be useful to you, but because they are so many in number, you can't find the correct one? Well, most of such problems can be solved if you arrange them in some particular pattern or order. Arranging things in ascending order is one way to collect and represent data.

Ascending means increasing. So when any quantity/map/list has its values from smallest to largest, we say that it is an ascending quantity/map/list. This increase can be in any form such as alphabets, weights, heights, and time. For example, we say, "The rocket is ascending into the sky." Here, it means that the rocket's distance from the ground after lift-off is constantly ascending as it orbits into space. This was a general idea for the word "ascending." Now, let us try to narrow down our knowledge to "ascending order."

What is Ascending Order?

The arrangement of data from the smallest to the largest value is known as ascending order. It is also known as increasing order. For example, consider the following numbers: [6,2,8,4,0]. Now, we try to arrange them in an increasing pattern. Thus, we get: 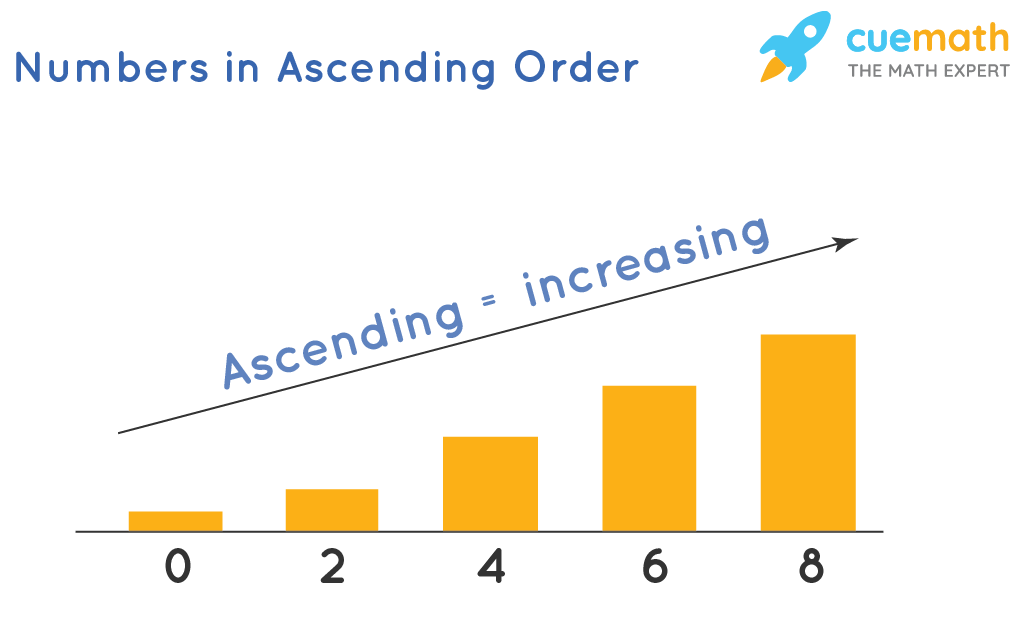 For example, arrange the following fractions in ascending order: 1/2, 2/5, 5/6, 3/5. If we convert these fractions into their decimal equivalents one by one, we get,

Now, all these decimals have 0 in the whole number part, so we have to look at the digit at the tenths place to arrange these numbers in ascending order.

With negative numbers, the highest number with the negative sign has the least value. So, if you have to arrange -34, -56, -4 into ascending order, then it is arranged in the following order:

-4 is the largest number and -56 is the smallest number out of the given three numbers. Look at the image given below to understand ascending order and descending order of numbers on a number line.

Check these interesting articles related to the concept of ascending order in math.

Have your child solve real-life challenges using math
Have your child apply concepts learned in school in the real world with the help of our experts.

What is Ascending Order?

Ascending order in math is the arrangement to organize numbers/items from smallest to largest. It is one of the ways to organize items or numbers. It is also known as increasing order. An example of ascending order is 1 < 2 < 3 < 4.

How do you Arrange Numbers in Ascending Order?

How to Arrange Fractions in Ascending Order?

What is the Difference Between Ascending and Descending Order?

How to Arrange Decimals in Ascending Order?

How to Arrange Integers in Ascending Order?