A histogram can be defined as a set of rectangles with bases along with the intervals between class boundaries. Each rectangle bar depicts some sort of data and all the rectangles are adjacent. The heights of rectangles are proportional to corresponding frequencies of similar as well as for different classes. Let's learn about histograms more in detail.

A histogram is the graphical representation of data where data is grouped into continuous number ranges and each range corresponds to a vertical bar.

The number ranges depend upon the data that is being used.

A histogram graph is a bar graph representation of data. It is a representation of a range of outcomes into columns formation along the x-axis. in the same histogram, the number count or multiple occurrences in the data for each column is represented by the y-axis. It is the easiest manner that can be used to visualize data distributions. Let us understand the histogram graph by plotting one for the given below example.

This data can be now shown using a histogram. We need to make sure that while plotting a histogram, there shouldn’t be any gaps between the bars. 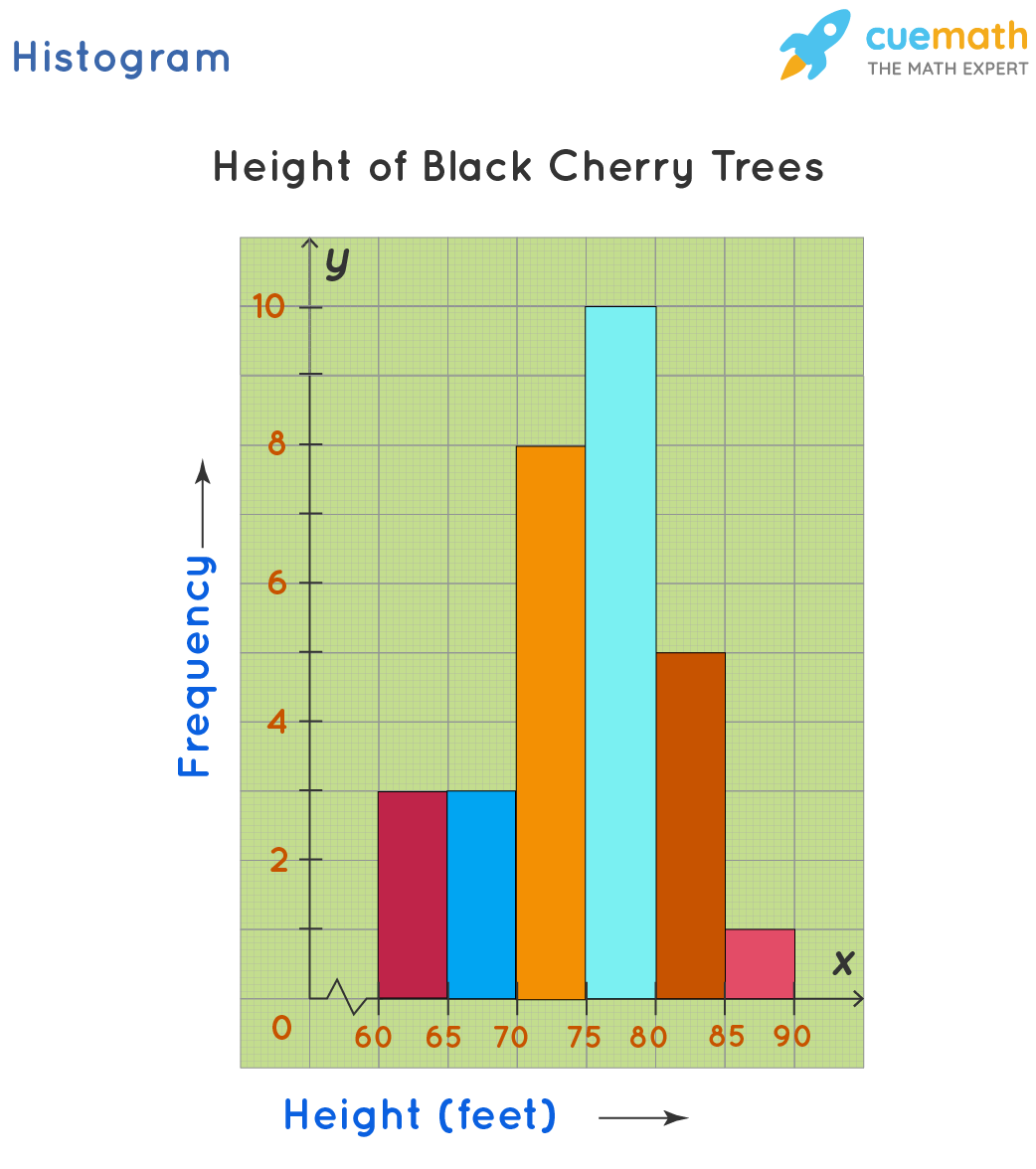 How to Make a Histogram?

The process of making a histogram using the given data is described below:

Example: Construct a histogram for the following frequency distribution table that describes the frequencies of weights of 25 students in a class.

Steps to draw a histogram: 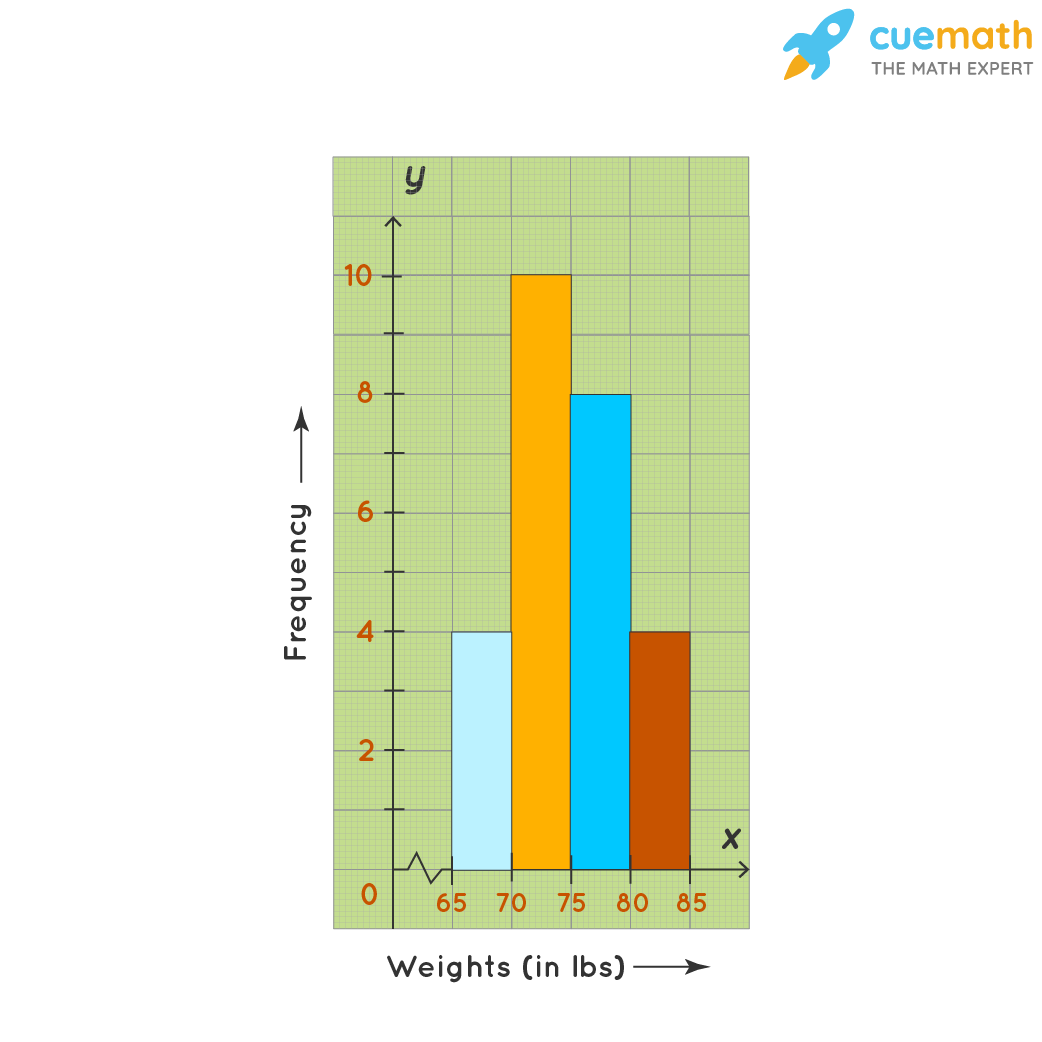 This data can be now shown using a frequency histogram. 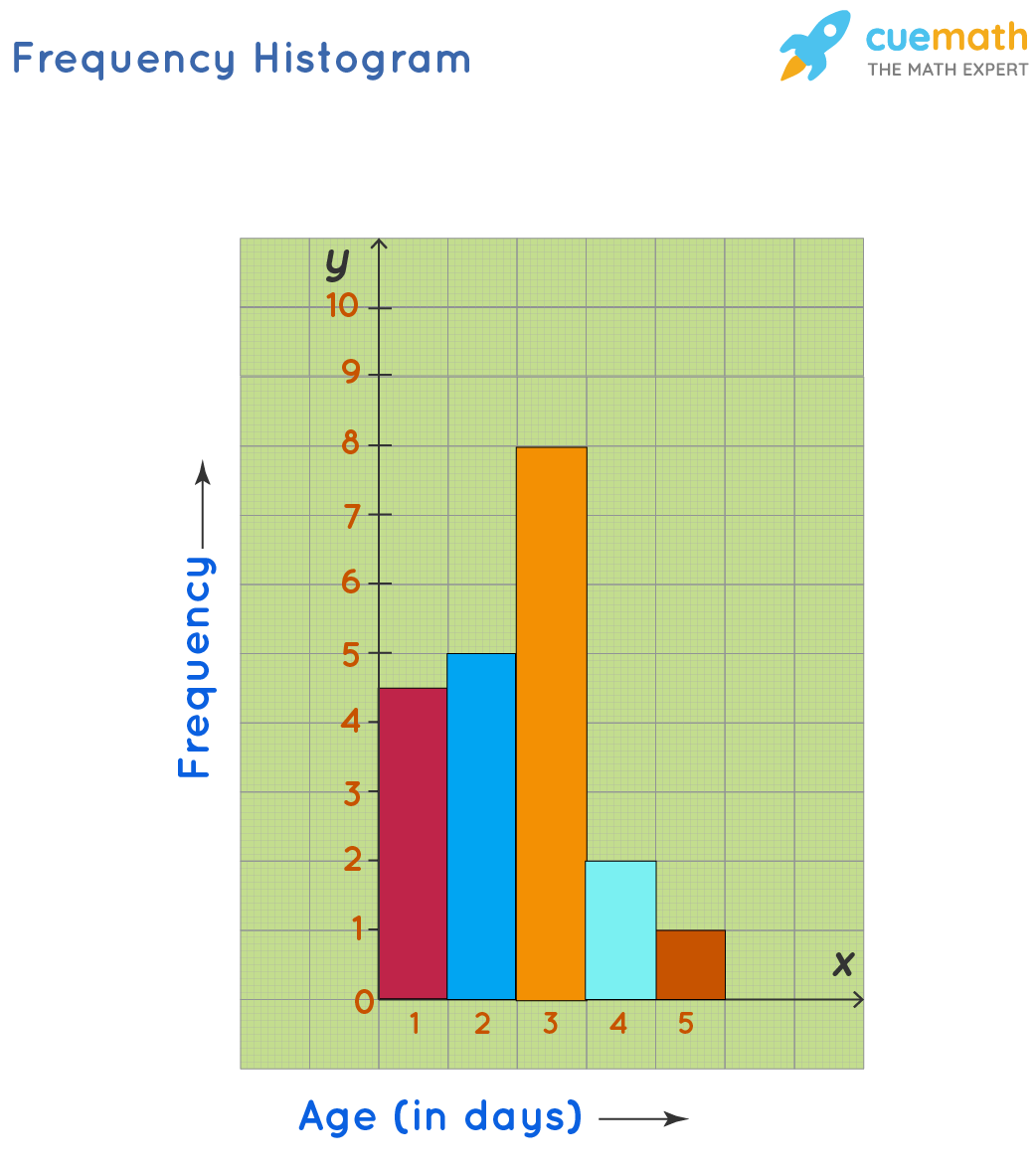 Let us discuss the above-mentioned types of histogram or histogram shapes in detail with the help of practical illustrations. 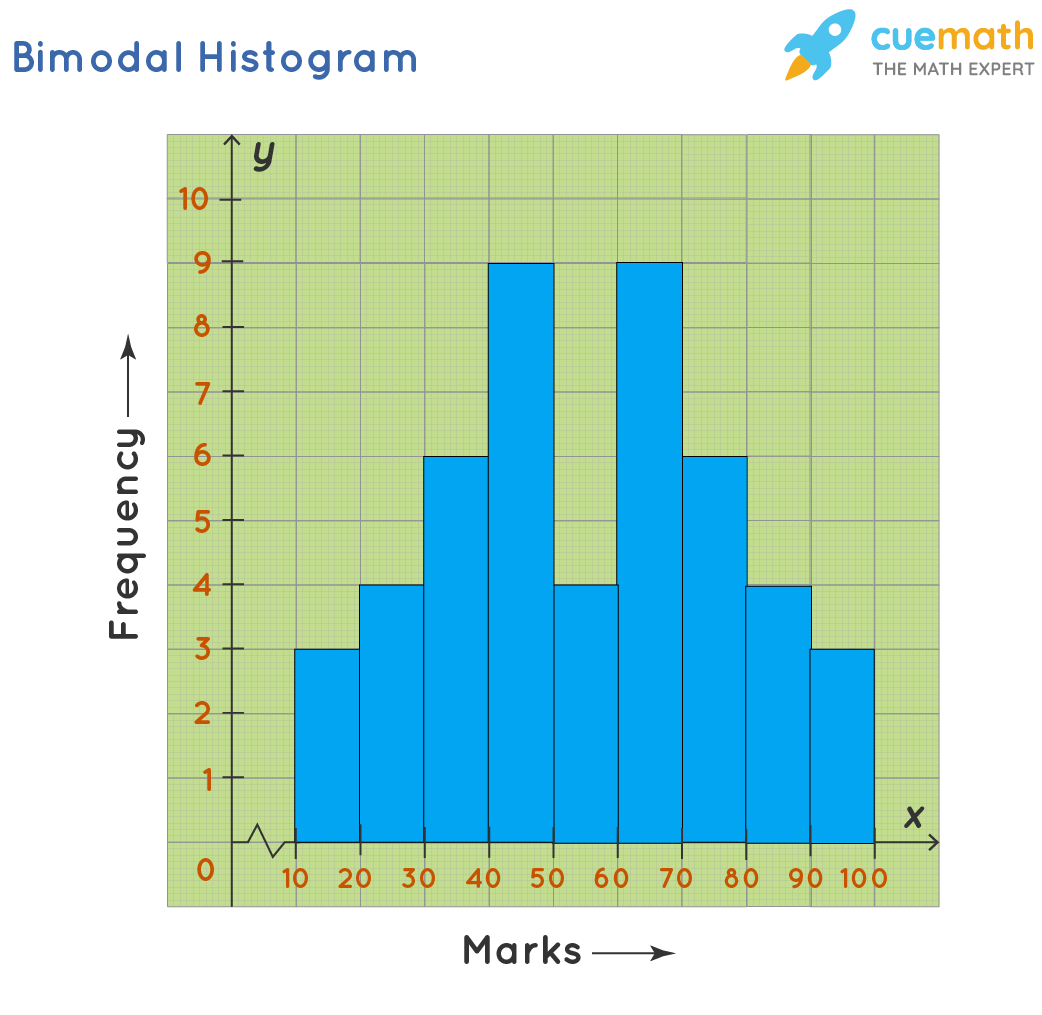 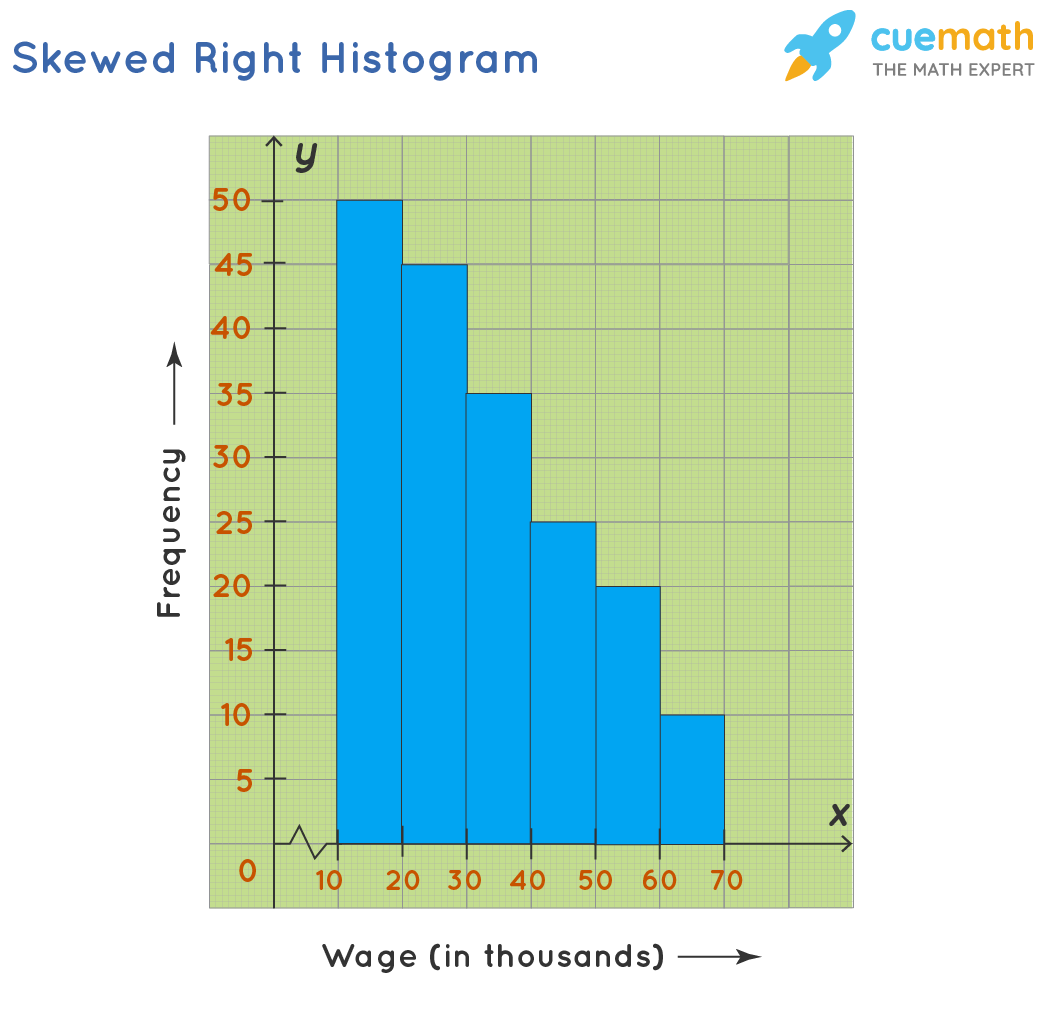 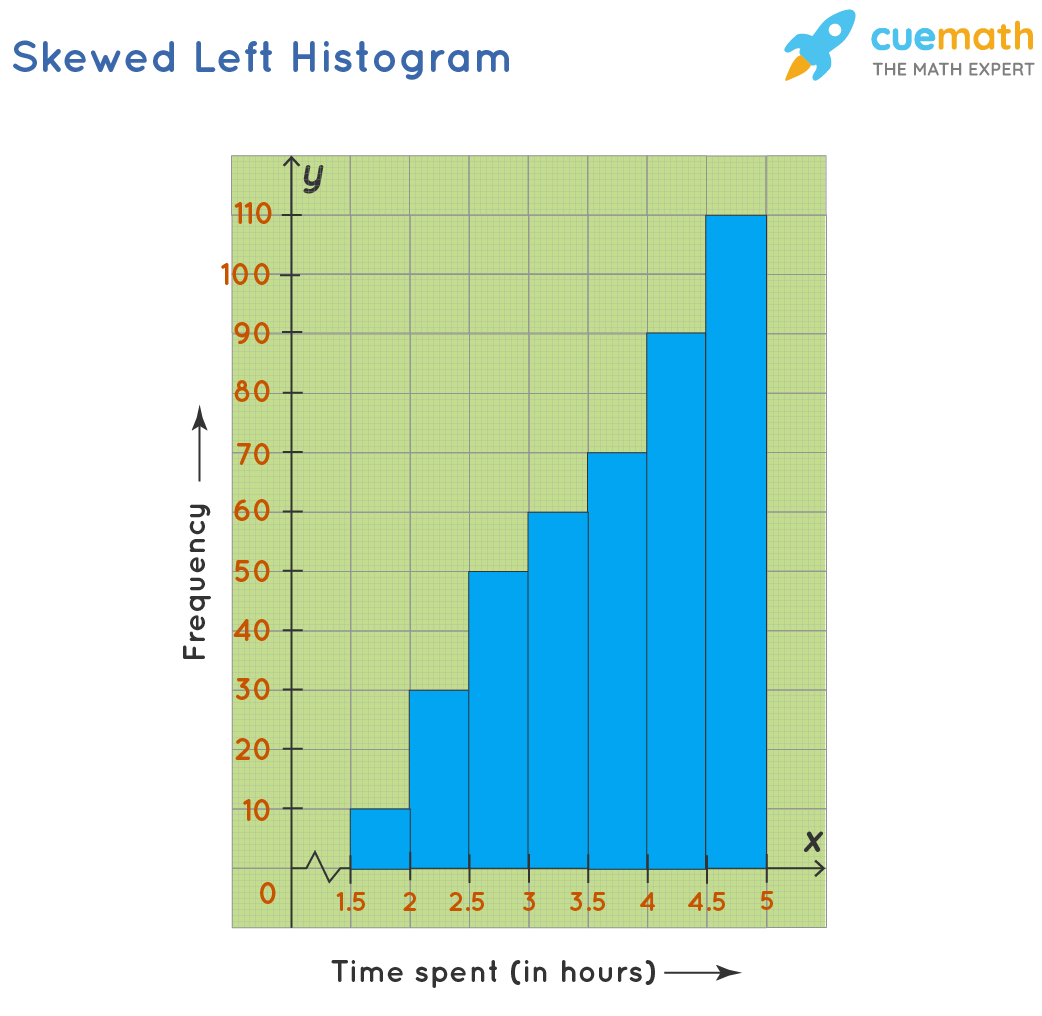 A uniform histogram is a histogram where all the bars are more or less of the same height. In this histogram, the lengths of all the bars are more or less the same. Hence, it is a uniform histogram. For example, Ma’am Lucy, the Principal of Little Lilly Playschool, wanted to record the heights of her students. The following histogram shows the number of students and their varying heights. The height of the students ranges between 30 inches to 50 inches. 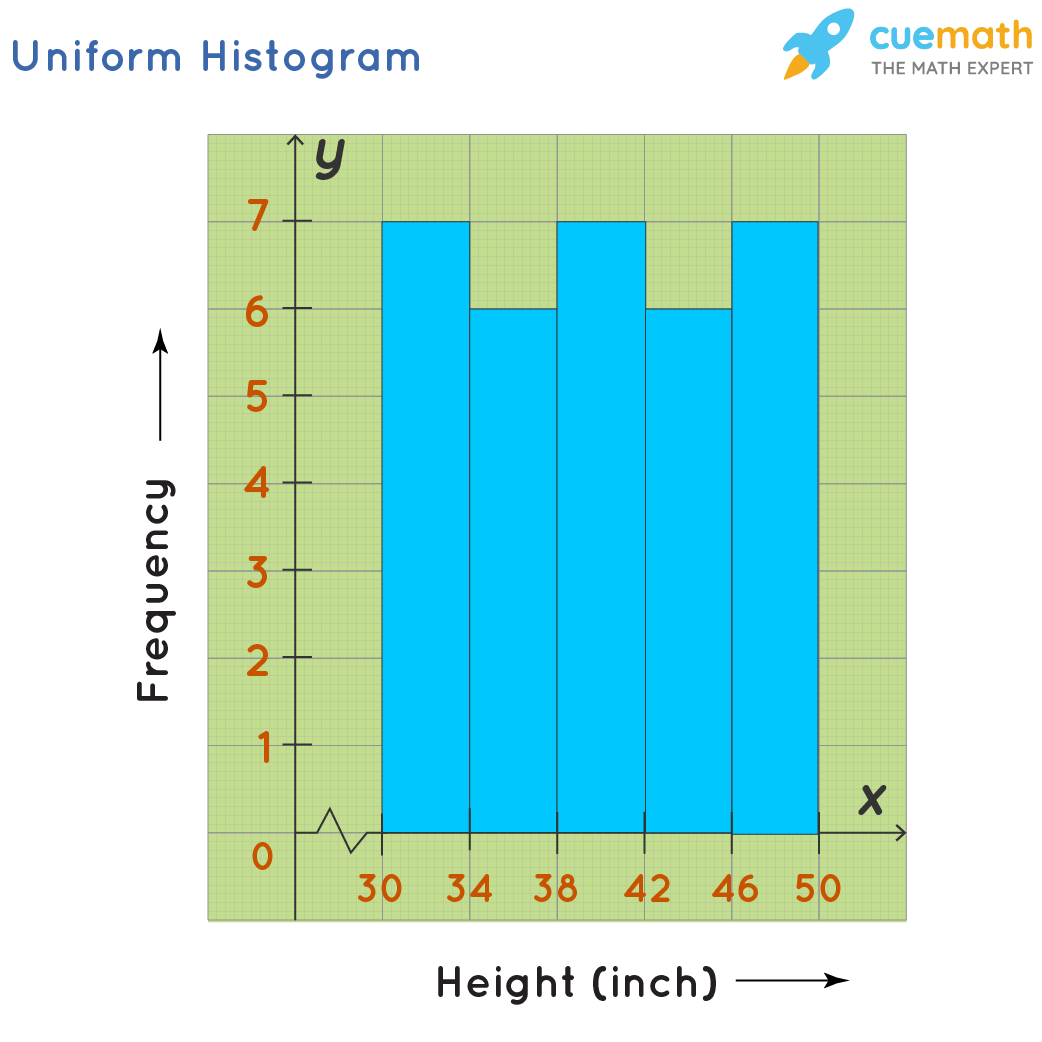 Difference Between a Bar Chart and a Histogram

The fundamental difference between histograms and bar graphs from a visual aspect is that bars in a bar graph are not adjacent to each other.

The main differences between a bar chart and a histogram are as follows:

But in both graphs, Y-axis represents numbers only. We can understand these differences from the following figure: 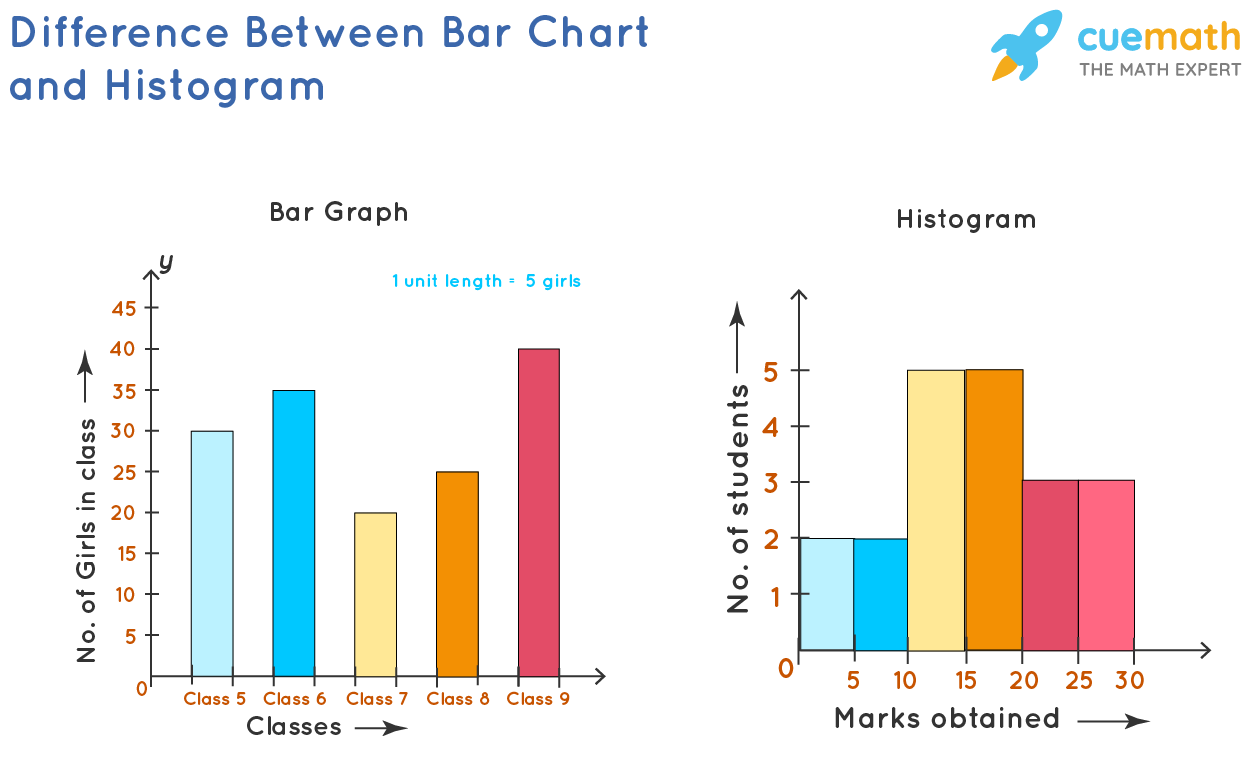 Tips and Tricks on Histogram

Following are the few important tips and tricks mentioned that to be kept in mind while visualizing any data via histogram.

What is a Histogram in Statistics?

A histogram in statistics is a solid figure or diagram that consists of rectangular bars. It is one of the major forms of a bar graph that is used to visualize any given numeric data with a practical approach.

What is a Histogram Used For?

A histogram is used for showing the frequencies of different data. It is the graphical representation of data where the data is grouped into continuous number ranges and each range corresponds to a vertical bar.

☛ Read the basics about histogram here:

What is a Histogram Graph?

A histogram is a type of graph for the graphical representation of data. This data is grouped into number ranges and each range corresponds to a vertical bar.

How do you Construct a Histogram?

The steps to construct a histogram are as follows:

What is the Difference Between a Bar Graph and a Histogram?

The fundamental difference between histograms and bar graphs from a visual aspect is that bars in a bar graph are not adjacent to each other. A bar graph has equal space between every two consecutive bars and X-axis can represent anything. On the other hand, a histogram has no space between two consecutive bars. They should be attached to each other and the X-axis should represent only continuous data that is in terms of numbers.

What is a Relative Frequency Histogram?

How are Histograms Used Around?

A histogram is a type of bar chart only that is used to display the variation in continuous data, such as time, weight, size, or temperature. A histogram helps to recognize and analyze patterns in data that are not apparent simply by looking at a table of data, or by finding the average or median.

☛ Learn more about the below terminologies:

How does a Histogram Represent Data?

A histogram is a graphical display of data with bars of different heights, where each bar groups numbers into ranges. The taller the bars, the more the data falls in that range. It displays the shape as well as the spread of continuous sample data.

Why Do We Use Kink in Histograms?

Kink is used to denote or represent a break on the axis of the histogram. There are some cases where data has huge figures or numeric values to represent such data via histogram we use the zigzag symbol known as kink. This kink helps in visualizing a given data by breaking it.

Why is a Histogram Two-Dimensional?

A histogram is a visual representation of data, a two-dimension graph that uses a set of vertical rectangles(emphasizing both the lengths and widths of the rectangles) to represent class frequencies of the given distribution. Click to know more about frequency distribution here.

How do you Interpret the Skewness of a Histogram?

We can interpret the skewness of a histogram by looking into the following aspects.