In Statistics, pictographs are charts that are used to represent data using icons and images relevant to the data. A key is often included in a pictograph that indicates what each icon or image represents. All icons in the pictogram must be of the same size, but we can use the fraction of an icon to show the respective fraction of that amount. Let us understand the concept of pictographs using examples.

In mathematics, a pictograph, also known as a pictogram, is the pictorial representation of data using images, icons, or symbols. We can represent the frequency of data while using symbols or images that are relevant using a pictograph. Pictographs are one of the simplest ways of representing data.

"A pictograph is a representation of data using images or symbols." Pictographs in maths are typically used in concepts like data handling. They help in laying the foundation for data interpretation based on pictorial information. Now after knowing the pictograph definition, let us understand pictographs using a scenario.

A survey was conducted for 40 children by a fast food junction to understand the demand for different flavors of pizza available in their outlet. The results were as follows: 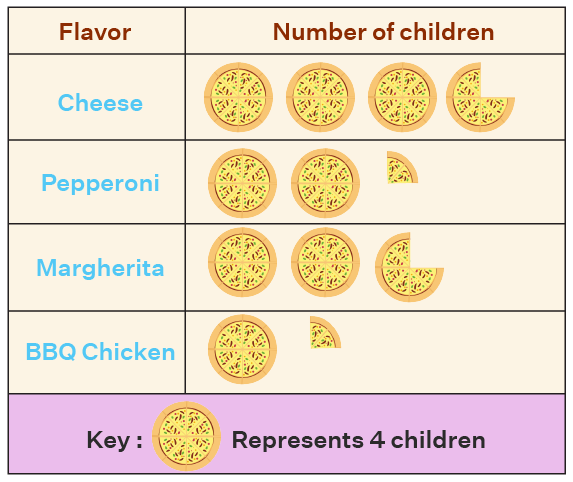 Can you identify the most loved flavor by observing the above table? If 1 full pizza represents 4 children, then what would a quarter slice represent? The scenario that we discussed above represents information in a pictographic manner. Here, the symbol for a full pizza is used to represent data (i.e. the number of students). We need to do simple math to understand how many children voted for each of the flavors. Multiply the number of symbols for the given flavor with the value of each symbol.

Key to a Pictograph

We use a key to denote the value of the symbol. In the above example, the key was 1 icon of the pizza representing 4 children.

Thus, after going through the above pictograph example, we come to the basic formula which is used to find the value of the data of the categories given in the chart/table.

How to Make a Pictograph?

Let us take an example. We will represent the average hours spent by students on different activities.

The following table gives this data:

The below-given steps can be followed to represent the data given in the table in the form of a pictograph.

Collect Data: Firstly, we need to collect the data of the different categories we want to represent. We then form a table or list. In the above example, the data is already provided in the form of a table.

Review the data and Pick a symbol: Review the collected data and based on it pick a symbol or picture that accurately represents the data. For drawing a pictograph to represent the number of hours spent on a particular activity, we can use an hourglass as a symbol.

Draw the pictograph: Finally, drawing the pictograph by initially drawing two columns that represent the category and the data. Then, draw the actual symbols representing the frequencies. These symbols can be drawn as fractions as well if the frequency is not a whole number or based on the key.

Review Pictograph: Check the labeling and review your pictograph and make sure it correctly represents the data. 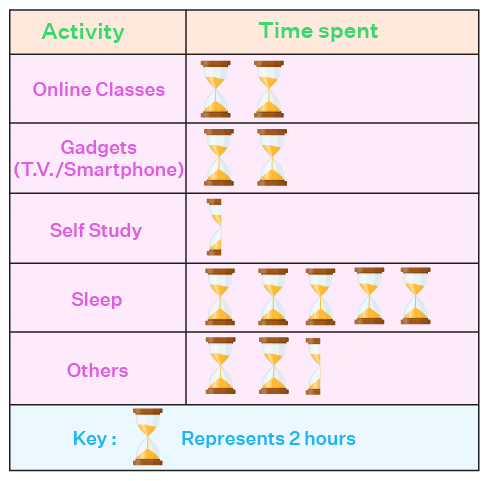 Let us understand how to read a pictograph based on the pictograph we created above by answering few questions.

Example: Based on the observations from the above pictograph, answer the following questions.

1. What is the average time spent by a child on gadgets?

2. How many hours on average does a child sleep during the lockdown on a weekday?

3. What is the total average time spent by a child on academics?

4. How many hours are spent on other activities?

Four friends are playing with 44 pieces of the puzzle. The number of pieces that each of them has is recorded in the form of a pictograph below. But there is some information missing. Can you find the missing entries using the given hints? 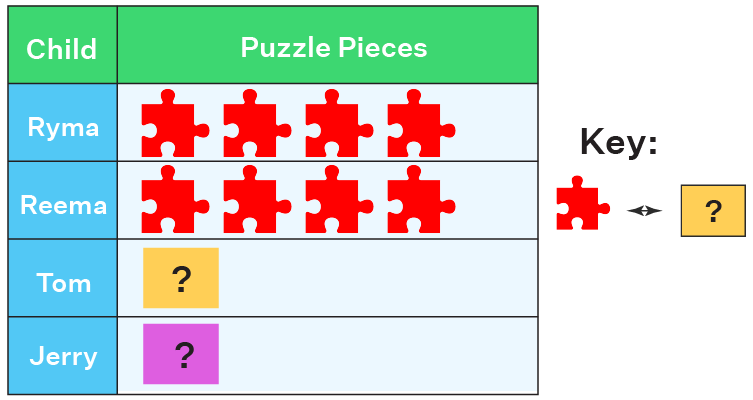 Check out these interesting articles to know more about pictographs and its related topics.

What is a Pictograph? Give Examples.

A pictograph is a representation of data using images or symbols. We see these pictographs in many real-life situations. A simple example is the star rating that is given by customers for items purchased. Consider a case when out of 5 stars, there are 3.5 stars highlighted. If it is given that 1 star = 20 points, then the rating by the customer will be 20 × 3.5 = 70 out of 20 × 5 = 100.

What is a Pictograph Chart?

A pictograph chart is a chart that uses icons or symbols to represent information or data. Each icon represents a certain frequency based on the key.

What is a Pictograph Used for?

A pictograph is used to represent data in the form of pictures or icons which makes the presentation more interesting and easier to understand.

What is Used in Pictograph?

In pictographs, we use icons and images to represent the data. These images or icons have a key, where 1 icon represents a certain frequency. Using this key, data can be represented in a tabular form in a pictograph.

What are the Advantages of a Pictograph?

There are many advantages of using a pictograph as a method to represent the given data.

What is Key in a Pictograph?

In a pictograph, we use a key to denote the value of the symbol. This key is used in representing the frequency of any category in a pictograph.

How to Draw a Pictograph?

We can draw a pictograph using simple steps,

How do you Find the Key to a Pictograph?

The key to a pictograph is used to find the frequency of the information the graph depicts for a particular category. We can choose a suitable key for a pictograph depending upon the values in the data set.

Pictographs were used as the earliest known form of writing and are believed to have been discovered in Egypt and Mesopotamia from before 3000 BC.