Line graphs, also called line charts, are used to represent quantitative data collected over a specific subject and a specific time interval. All the data points are connected by a line. Data points represent the observations that are collected on a survey or research. The line graph has an x-axis and a y-axis.

The world today is becoming more and more information-oriented. Every part of our lives utilizes data in one form or another. The tabular representation of data is an ideal way of presenting them systematically. When these numerical figures are represented graphically in the form of a bar graph or a line graph, they become more noticeable and easily understandable, leaving a long-lasting effect on the mind of the observer. Let us understand line graph in detail in the following sections.

What is a Line Graph?

Line graph gives a graphical representation of the changes that had occurred over a given period of time. Line graph has a horizontal axis called the x-axis and a vertical axis called the y-axis. The x-axis usually has a time period over which we would like to measure the quantity of a specific thing or an item in the y-axis. Line graph helps to analyze the trend of whether the quantity in the y-axis is increasing or decreasing over a period of time. Line graph gives a clear picture of an increasing or a decreasing trend.

A line graph is a type of chart or graph that is used to show information that changes over time. A line graph can be plotted using several points connected by straight lines. 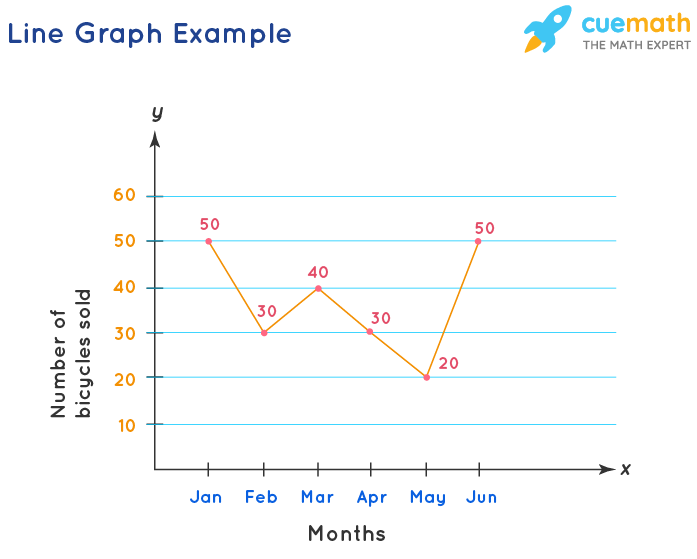 A few key takeaways from line graph are as follows:

Parts of a Line Graph

Line graph consists of a horizontal x-axis and a vertical y-axis. Most line graphs only deal with positive number values, so these axes typically intersect near the bottom of the y-axis and the left end of the x-axis. The point at which the axes intersect is always (0,0). Each axis is labeled with a data type. For example, the x-axis could be days, weeks, quarters, or years, while the y-axis shows revenue in dollars. Data points are plotted and connected by a line in a "dot-to-dot" fashion.

Let's understand the various parts of a line graph. 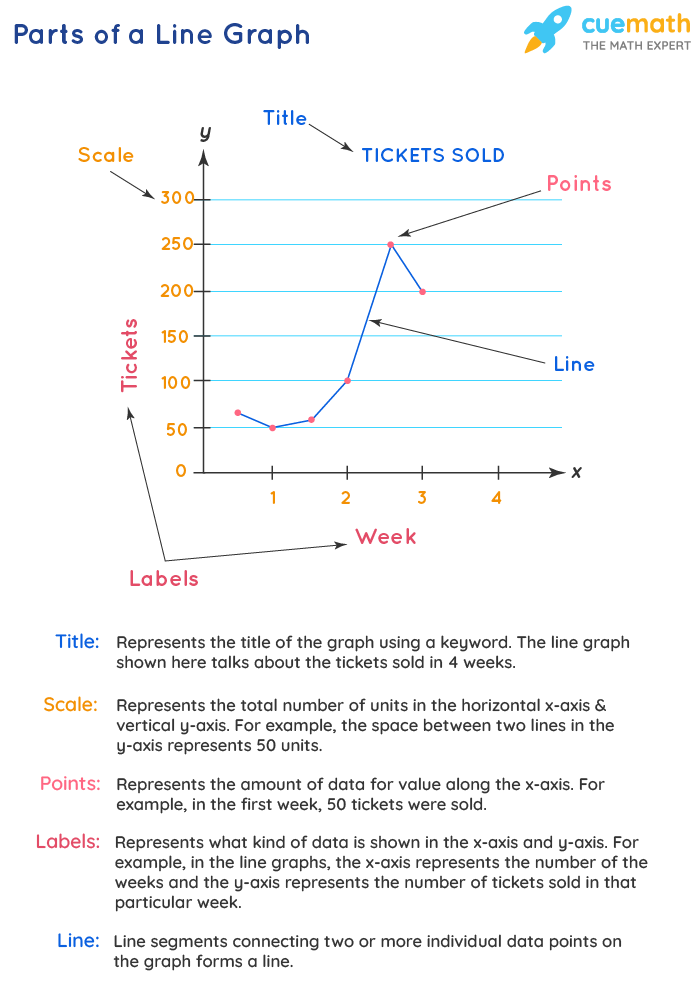 While comparing data sets, the line graph is only useful if the x and y axes follow the same scales. The x-axis is also known as the independent axis because its values do not depend on anything. For example, time is always placed on the x-axis since it continues to change regardless of anything else. The y-axis is also known as the dependent axis because its values depend on variables on the x-axis: at this time, the company had these many sales. The result is that the straight line always progresses in a horizontal fashion and for each x value, there is a unique value of y. For example, the company cannot have two different value sales at the same time.

Consider the following steps to read and interpret a line graph: 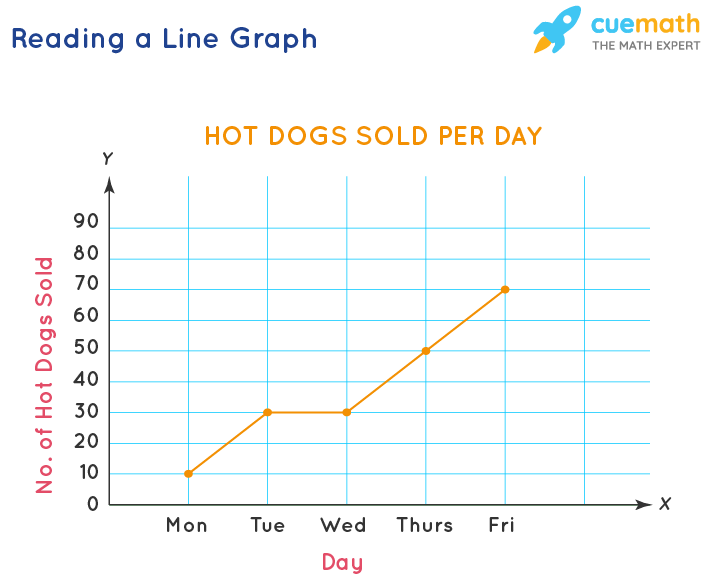 The following steps can be used to create a line graph.

Here are some key points to remember while creating line graph.

Kinds of Data in a Line Graph

Line charts can display continuous data over time, set against a common scale, and are therefore ideal for showing trends in data at equal intervals or over time. As a general rule, use a line chart when your data includes non-numeric (category) data. For example, a shopkeeper wants to analyze the growth of his business over a period of one year. So, the time factor, i.e., the names of months would be considered on the horizontal x-axis whereas the vertical y-axis will be used to depict the numerical values, i.e., the monthly profit.

The advantages of using line graph are as follows.

Here are some limitations of using line graph.

Observe the two graphs shown below and notice the difference between the two,

Check out some interesting articles related to a line graph.

What is a Line Graph?

A line graph is a tool used in statistics to analyze the trend of data that changes over a specified interval of time in a coordinate plane. Here the time and data are represented in an x-and-y-axis. It is also called a line chart. The x-axis or the horizontal axis usually has the time; and the data that changes with respect to the time is present in the vertical axis or the y-axis. Data obtained for every interval of time is called a 'data point'. It is represented using a small circle. An example of a line graph would be to record the temperature of a city for all the days of a week to analyze the increasing or decreasing trend.

What is a Data Point in a Line Graph?

The point of intersection on the line graph that matches a time on the x-axis to a data value on the y-axis is called a data point. The data points in a line graph are represented using small circles or dots. They are connected by line segments to determine the growth trend.

What are the Parts of a Line Graph?

The important parts of a line graph are as follows.

What are the Steps in Creating a Line Graph?

The steps in creating a line graph are as follows.

What is a Straight Line Graph?

A straight-line graph is a linear graph involving two variables. Its general form is y = mx + c, where 'x' and 'y' are the variables, 'm' is the slope pf graph and 'c' is constant which is the value of 'y' when x = 0.

What are the Advantages of a Line Graph?

A line graph is a tool to do trend analysis on a subject over a period of time. There are some advantages of using a line graph. They are as follows.

What are the Disadvantages of a Line Graph?

Though a line graph is easily readable and easy to use, there are some disadvantages too in using them. They are as follows.

What are the Differences Between a Line Graph and a Scatter Plot?

What is a Double Line Graph?

It is a line graph representation of two sets of information on a single graph. It is generally used for the purpose of comparing the outcomes, information, or events. Usually, the lines are denoted by different colors to have clarity of the data.

How Many Lines Can be Present in a Line Graph?

There can be more than one line in a line graph as it helps to compare the data. It is advisable to use different colors to avoid confusion and errors in interpretation. Avoid using more than 4-5 lines simultaneously as the lines may become an unreadable tangle and you may have a hard time interpreting them.