The word 'Geometry' is derived from an ancient Greek word 'geometron'. The word 'geo' means 'Earth' and 'metron' means 'measurement'. The study of geometry is extremely ancient and has been carried on for many thousands of years, across all civilizations – Egypt, Babylonia, India, China, Greece, the Incas, etc. Problems of geometry are so fundamental to our lives that it is natural for this study to be almost as old as civilization itself. Geometry was used in land surveying, pyramid construction by the ancient Egyptians. A pyramid is a structure that includes four triangular faces and a square base.

For these civilizations, geometry consisted of a set of results that they could apply to guide and refine their constructions. However, with the coming of the Greeks, geometry turned into a more rigorous discipline, with more emphasis on reasoning rather than on results. The Greeks were the first to systematically introduce the concept of proofs. A proof consists of a series of arguments, starting from an original assumption, and designed to show that a given assertion is true.

One of the notable important advancements in the field of Geometry is "Euclid's Elements". This was written by a Greek Mathematician named 'Euclid'. Euclid's Elements include a set of 13 books which includes theorems, constructions, and geometrical proofs. Euclidean geometry deals with the study of lines, angles, solid shapes, and figures with the help of axioms and postulates. There are five important postulates. They are,

The next important advancement that is notable is 'Coordinate Geometry'. This branch of geometry uses coordinates and equations. Coordinate geometry played a very important role in the field of Calculus and Physics.

In the 19th century, Non-Euclidean Geometry was developed by Carl Friedrich Gauss, Nikolai Lobachevsky, and Janos Bolyai. Non-Euclidean Geometry supports the first four postulates as discussed in the Euclidean Geometry, but the fifth postulate, which is also called the parallel postulate was not agreed upon. This paved the way to create two other types of Geometry called 'Hyperbolic Geometry' and 'Elliptical Geometry (or Spherical Geometry)'.  Spherical geometry is used to study spherical surfaces, whereas Hyperbolic geometry is used to study saddle surfaces. A saddle is a point that is low lying between two high points.

Geometry deals with the study of shapes and sizes of objects. It is derived from the Greek word which denotes 'Earth Measurement'. It also deals with rules to calculate length, area, and volumes. There was not any correct way of calculating these parameters. Many were based on trial and error. The concepts of geometry are concerned with our day-to-day life. In the ancient days, people were willing to know the volume of solid shapes to store goods and also for construction purposes. The theory of conic sections, which was a part of Greek geometry found its application in astronomy and optics. Another important and notable discovery was that of Pythagoras. Pythagoras was an ancient Greek mathematician, who discovered that there is a relationship between the sides of a right-angled triangle and gave it proof. The Pythagoras theorem finds its application in the field of trigonometry. It uses the concepts of both algebra and geometry.

There are certain branches of geometry that deal with certain content. They are as follows.

Euclidean geometry deals with the study of length, area, and volume of solid shapes based on certain axioms and theorems. It was developed by a Greek mathematician called Euclid. This branch of geometry deals with terms like points, lines, surfaces, dimensions of the solids, etc.

Analytical geometry also referred to as coordinate geometry or cartesian geometry deals with the coordinate system to represent lines and points. In analytical geometry a point is represented by two or three numbers to denote its position on a plane, this is called a coordinate point. It is written in the form of (3,4), where 3 is the x-coordinate and 4 is the y-coordinate. We can also have a point (2, 3, 4) where 2 is the x-coordinate, 3 is the y-coordinate and 4 is the z-coordinate. This branch of geometry uses algebraic equations and methods to solve problems. It also deals with midpoint, parallel and perpendicular lines, line equations, distances between two linear paths. The figure below shows a point (3,4) on a coordinate plane. 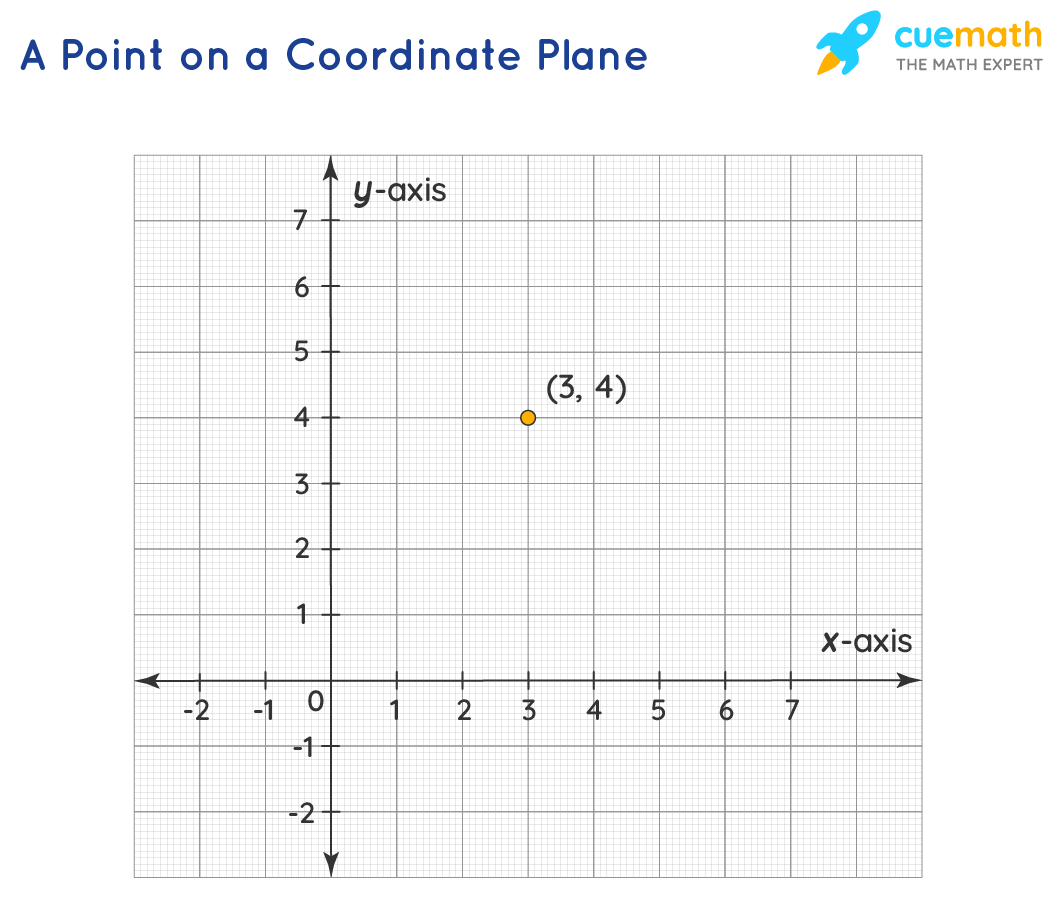 A branch of geometry that deals with geometric images when they are projected into another surface. It is more inclined towards the point of view of an object. Also, projective geometry does not involve any angle measures. It involves only construction using straight lines and points.

A branch of geometry that deals with curved surfaces and investigating geometrical structures, calculating variations in manifolds, and many more. It uses the concepts of differential calculus. It is mainly used in physics and chemistry for various calculations.

Topology is a branch of geometry, which deals with the study of properties of objects that are stretched, resized, and deformed. Topology deals with curves, surfaces, and objects in a three-dimensional surface or a plane.

Given below are some important geometric terms and definitions.

Topics Related to Origin of Geometry

Check out these interesting articles to know more about the origin of geometry and its related topics.

FAQs on Origin of Geometry

Geometry is a branch of math that deals with sizes, shapes, points, lines, angles, and the dimensions of two-dimensional and three-dimensional objects.

What are Angles in Geometry?

In geometry, an angle is a small figure that is formed at a place where two lines intersect. Angle is generally measured in degrees. But in math, angles can be measured in both degrees and radians. The types of angles are acute (which is less than 90°), obtuse angles (which are greater than 90°), and right angle (which is exactly equal to 90°).

What are Parallel Lines and Perpendicular Lines?

Parallel lines are lines that are on the same plane but never meet each other, whereas perpendicular lines are those which intersect each other exactly at 90°.

What is Pythagoras Theorem?