3D shapes are solids that consist of 3 dimensions - length, breadth (width), and height. 3D in the word 3D shapes means three-dimensional. Every 3D geometric shape occupies some space based on its dimensions and we can see many 3D shapes all around us in our day-to-day life. Some examples of 3D shapes are cube, cuboid, cone, and cylinder.

What are 3D Shapes?

3D shapes are solid shapes or objects that have three dimensions (which are length, width, and height), as opposed to two-dimensional objects which have only a length and a width. Other important terms associated with 3D geometric shapes are faces, edges, and vertices. They have depth and so they occupy some volume. Some 3D shapes have their bases or cross-sections as 2D shapes. For example, a cube has all its faces in the shape of a square. Let us now learn about each 3-dimensional shape (3D shape) in detail. 3D shapes are classified into several categories. Some of them have curved surfaces; some are in the shape of pyramids or prisms.

In mathematics, we study 3-dimensional objects in the concept of solids and try to apply them in real life. Some real-life examples of 3D shapes are shown below which are a soccer ball, a cube, a bucket, and a book. 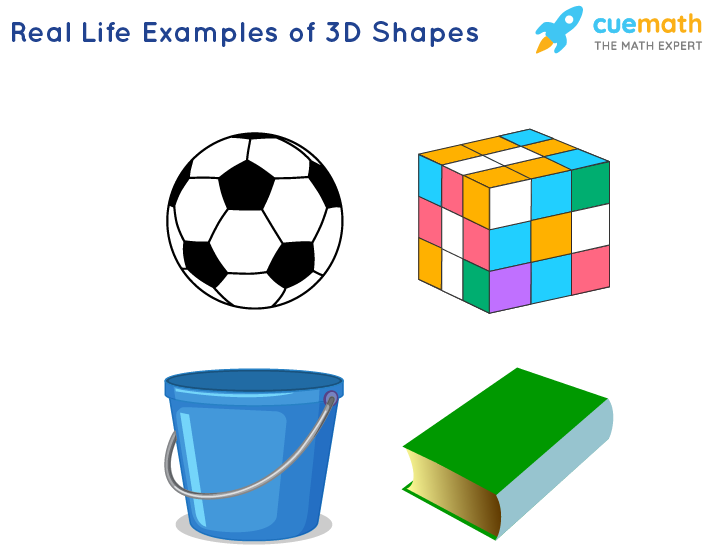 There are many 3 dimensional shapes (3D shapes) that have different bases, volumes, and surface areas. Let us discuss each one of them.

A sphere is round in shape. It is a 3D geometric shape that has all the points on its surface that are equidistant from its center. Our planet Earth resembles a sphere, but it is not a sphere. The shape of our planet is a spheroid. A spheroid resembles a sphere but the radius of a spheroid from the center to the surface is not the same at all points. Some important characteristics of a sphere are as follows. 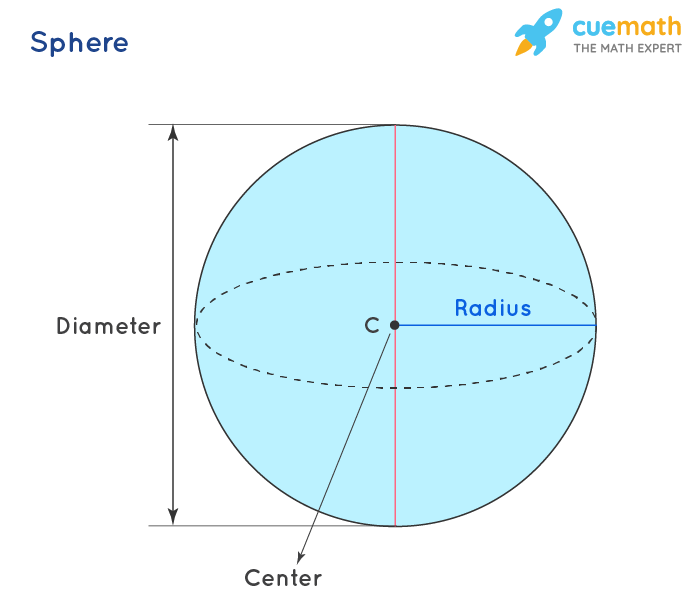 Cube and cuboid are three-dimensional shapes (3D shapes) that have the same number of faces, vertices, and edges. The main difference between a cube and a cuboid is that in a cube, all its six faces are squares and in a cuboid, all its six faces are rectangles. A cube and a cuboid occupy different volumes and have different surface areas. The length, width, and height of a cube are the same, while for a cuboid, length, height, and width are different. 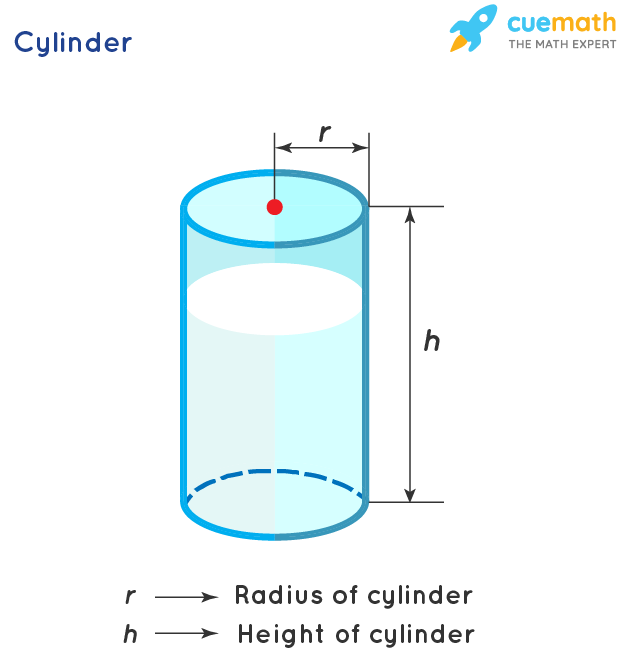 A cone is another three-dimensional shape (3D shape) that has a flat base (which is of circular shape) and a pointed tip at the top. The pointed end at the top of the cone is called 'Apex'. A cone also has a curved surface. Similar to a cylinder, a cone can also be classified as a right circular cone and an oblique cone. 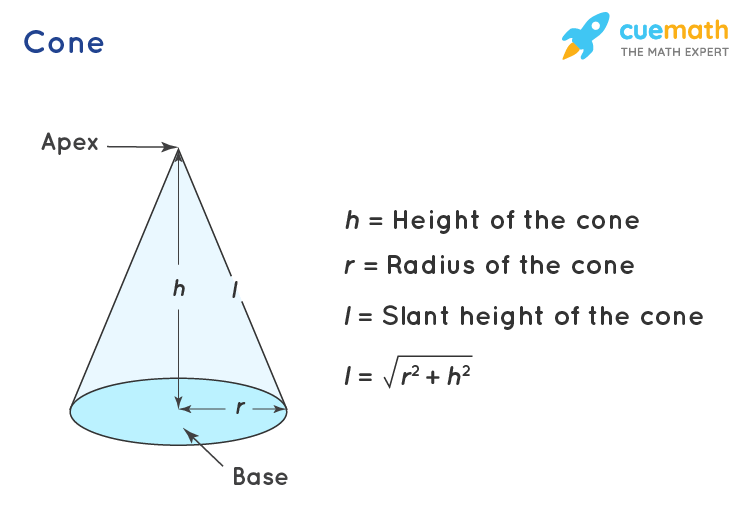 A torus is a 3D shape. It is formed by revolving a smaller circle of radius (r) around a larger circle with a bigger radius (R) in a three-dimensional space. 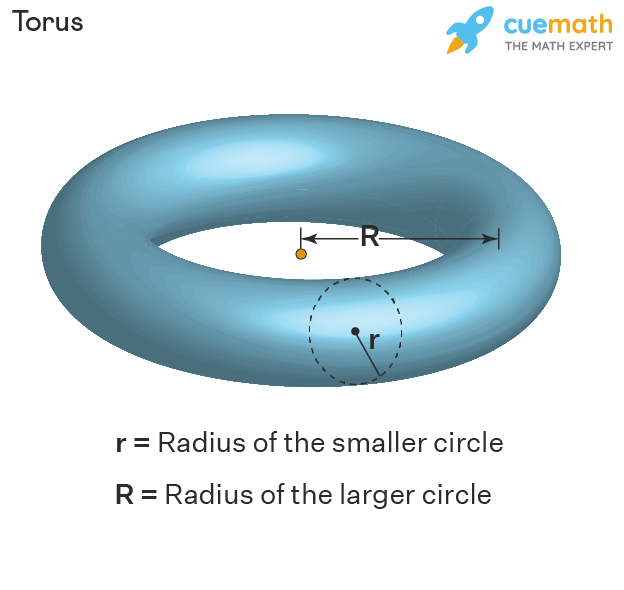 A pyramid is a polyhedron with a polygon base and an apex with straight edges and flat faces. Based on their apex alignment with the center of the base, they can be classified into regular and oblique pyramids. 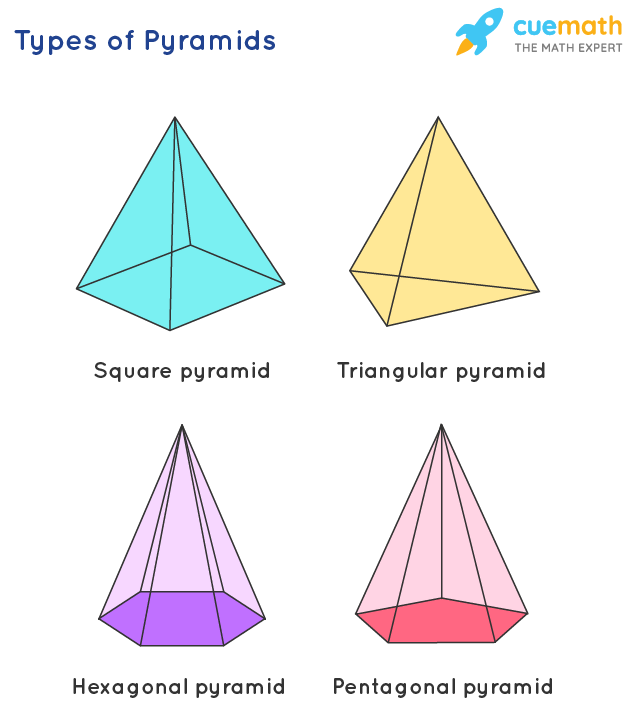 Prisms are solids with identical polygon ends and flat parallelogram sides. Some of the characteristics of a prism are:

Now, let us learn about 3-dimensional shapes that are platonic solids.

A polyhedron is a 3D shape that has polygonal faces like (triangle, square, hexagon) with straight edges and vertices. It is also called a platonic solid. There are five regular polyhedrons. A regular polyhedron means that all the faces are the same. For example, a cube has all its faces in the shape of a square. Some more examples of regular polyhedrons are given below: 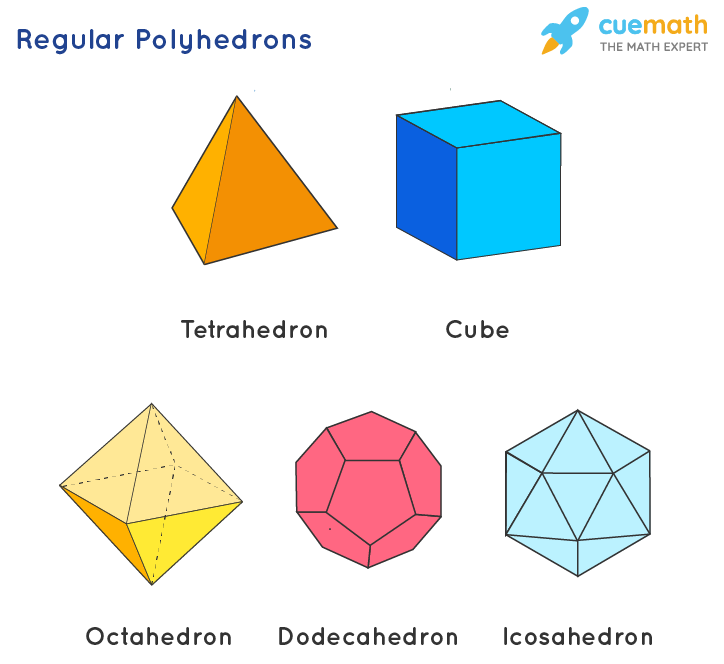 Every 3D shape has some properties which help us to identify them easily. Let us discuss each of them briefly.

As discussed, all 3 Dimensional shapes have a surface area and volume. The surface area is the area covered by the 3D shape at the bottom, top, and all the faces including the curved surfaces, if any. Volume is defined as the amount of space occupied by a 3D shape. Every three-dimensional shape (3D shape) has different surface areas and volumes. The following table shows different 3D shapes and their formulas. 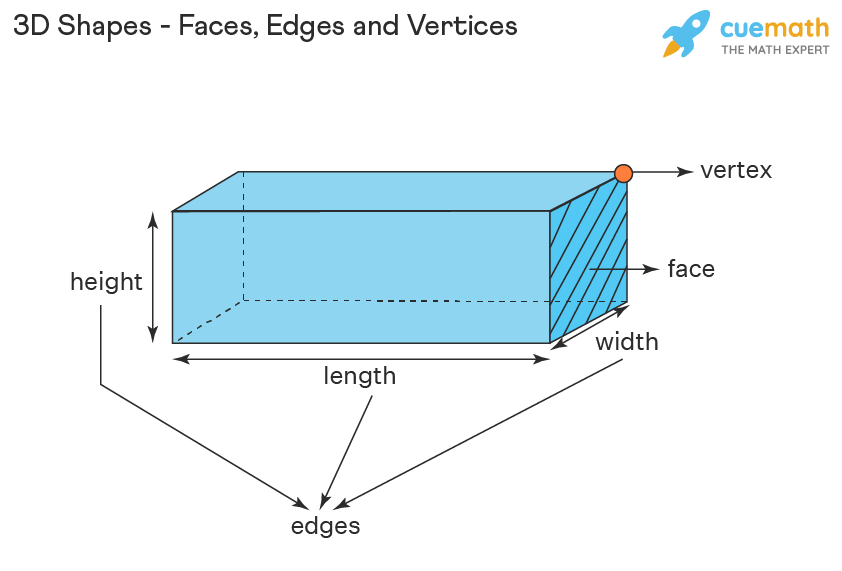 The following table shows the faces, edges, and vertices of a few 3-dimensional shapes (3D shapes).

We can understand the three-dimensional shapes and their properties by using nets. A 2-dimensional shape that can be folded to form a 3-dimensional object is known as a geometrical net. A solid may have different nets. In simple words, the net is an unfolded form of a 3D figure. Observe the following figure to see the nets that are folded to make a 3D shape. 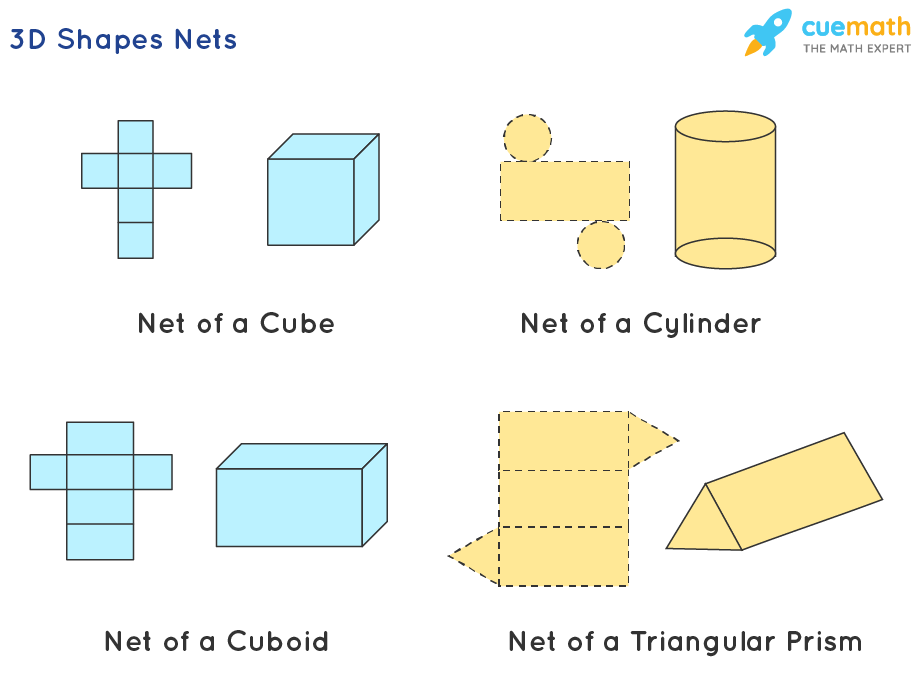 What are 3D Shapes?

A shape or a solid that has three dimensions is called a 3D shape. 3D shapes have faces, edges, and vertices. They have a surface area that includes the area of all their faces. The space occupied by these shapes gives their volume. Some examples of 3D shapes are cube, cuboid, cone, cylinder. We can see many real-world objects around us that resemble a 3D shape. For example, a book, a birthday hat, a coke tin are some real-life examples of 3D shapes.

A very important feature of a 3D shape is its face, vertex, and edge. Generally, the face of a 3D shape is a polygon-shaped flat surface. A 3D shape has more than one face except for a sphere. A vertex is a sharp-pointed corner. Edge is a line segment or the distance between two adjacent vertices of a 3D shape. Different 3D shapes have different numbers of faces, vertices, and edges. For example, a cube is a 3D shape that has 6 faces, 12 edges, and 8 vertices.

Does a 3D Geometric Shape Only Have a Flat Surface?

What is the Difference Between 2D and 3D Shapes?

The differences between a 2D shape and a 3D shape are given as follows.

What is the Surface Area and Volume of a 3D Shape?

Surface area means the area of all the individual faces of the 3D shape. All the 3D shapes have some depth. The space inside a 3D shape is called its volume.

Which 3D Shape has No Flat Face, Edge, or Vertex but Only One Curved Surface?

A sphere is a 3D shape that has no flat face, edges, or vertices. It has only one curved surface. The surface area of a sphere is calculated with the help of the formula, Surface area of sphere = 4πr2. A torus is another shape that does not have a flat face, edge, or vertex. It is in the shape of a ring. It is formed by revolving a smaller circle around a larger circle in a three-dimensional space.

What are the Common Properties of 3D Geometric Shapes?

The common properties of 3D shapes are as follows.

What can a 3D Shape also be Called?

In geometry, a three-dimensional shape can also be called a solid shape.

What Objects are 3D Shapes?

What is the Volume of a 3D Shape?

The volume of 3D Shapes refers to the amount of cubic space filled within the shapes. To find the volume, we need the measurement of the three dimensions. The calculations of the volume of 3D shapes become easier if we know the formula of each shape.