A sphere is a three-dimensional round-shaped object. Unlike other three-dimensional shapes, a sphere does not have any vertices or edges. All the points on its surface are equidistant from its center. In other words, the distance from the center of the sphere to any point on the surface is equal. There are many real-world objects that we see around us which are spherical in shape. Our planet Earth is not in a perfect shape of a sphere, but it is called a spheroid. The reason it is called a spheroid is that it is almost similar to that of a sphere.

What is a Sphere?

In geometry, a sphere is a three-dimensional solid figure, which is round in shape. From a mathematical perspective, it is a combination of a set of points connected with one common point at equal distances in three dimensions. Some examples of a sphere include a basketball, a soap bubble, a tennis ball, etc. The important elements of a sphere are as follows: 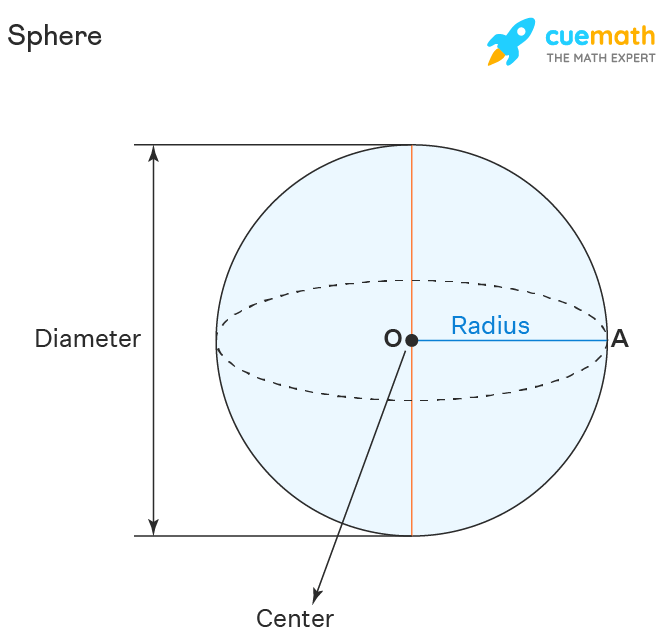 As we discussed in the previous section, a sphere has a radius, diameter, circumference, surface area, and volume. Considering a sphere to have a radius of 'r', the following table lists the important formulas of a sphere.

The volume of a sphere is the measure of space that can be occupied by it. It is measured in cubic units. The sphere's volume formula is given below:

For more details, check this article on volume of sphere.

Properties of a Sphere

A sphere is a three-dimensional object that has all the points on its outer surface to be equidistant from the center. The following properties of a sphere will help you to identify a sphere easily. They are as follows:

Circumference of a Sphere

Difference between Circle and Sphere

Check these interesting articles related to the sphere shape. Click to know more!

What is a Sphere Shape?

A sphere is a 3D shape with no vertices and edges. All the points on its surface are equidistant from its center. Some real-world examples of a sphere include a football, a basketball, the model of a globe, etc. Since a sphere is a three-dimensional object, it has a surface area and volume.

What is the Diameter of a Sphere?

The length of a line segment that connects two opposite points on the surface of the sphere passing through its center is called the diameter of a sphere. It can be calculated by multiplying the radius by 2.

How to Find the Surface Area of a Sphere?

The surface area of a sphere is the area occupied by its outer surface or boundary. In simple words, the amount of material used to cover the outer part of a sphere gives its surface area. The formula to find the sphere surface area is 4πr2 square units.

How to Find the Volume of a Sphere?

Does a Sphere Have a Face?

A face is referred to as a flat or curved surface on a three-dimensional object. For instance, a cube has 6 faces. Thereby, a sphere has only one face which is a curved surface. It does not have any flat faces.

What is the Difference Between a Circle and Sphere?

What is the Difference Between a Sphere and a Spheroid?

How to Find the Circumference of a Sphere?