In Mathematics, symmetry means that one shape is identical to the other shape when it is moved, rotated, or flipped. If an object does not have symmetry, we say that the object is asymmetrical. The concept of symmetry is commonly found in geometry.

What is Symmetry in Math?

A shape or an object has symmetry if it can be divided into two identical pieces. In a symmetrical shape, one-half is the mirror image of the other half. The imaginary axis or line along which the figure can be folded to obtain the symmetrical halves is called the line of symmetry.

A shape is said to be symmetric if it can be divided into two more identical pieces which are placed in an organized way. For example, when you are told to cut out a ‘heart’ from a piece of paper, you simply fold the paper, draw one-half of the heart at the fold and cut it out to find that the other half exactly matches the first half. The heart carved out is an example of symmetry. Similarly, a regular pentagon when divided as shown in the image below, has one part symmetrical to the other. 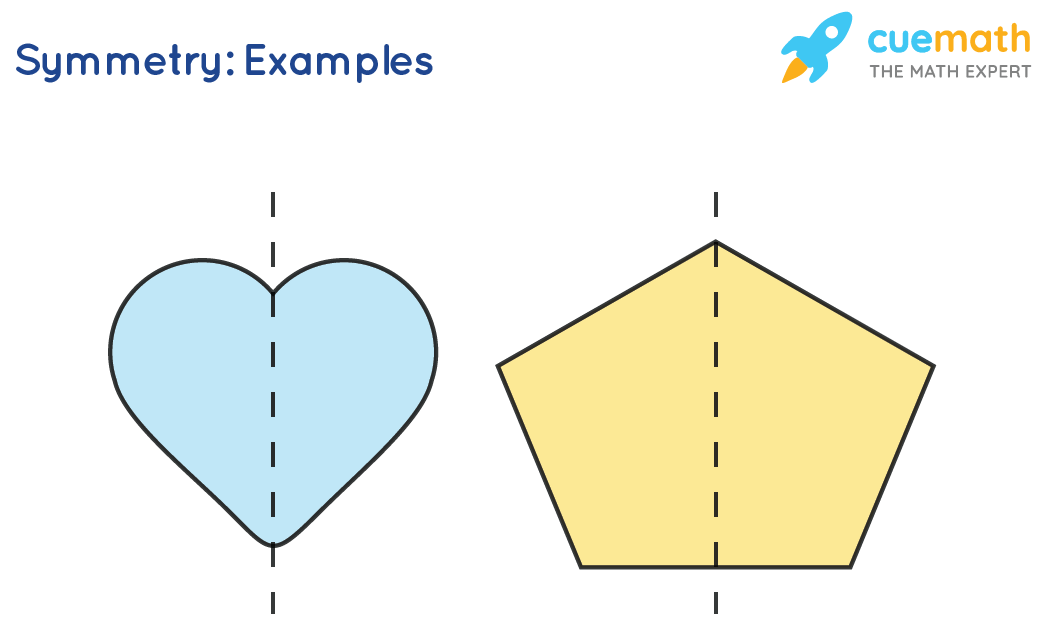 The definition of Symmetry in Math, states that “symmetry is a mirror image”, i.e., when an image looks identical to the original image after the shape is being turned or flipped, then it is called symmetry. Symmetricity exists in patterns. It is a balanced and proportionate similarity found in two halves of an object, which means one-half is the mirror image of the other half. Symmetric objects are found all around us in day-to-day life, in art, and in architecture. 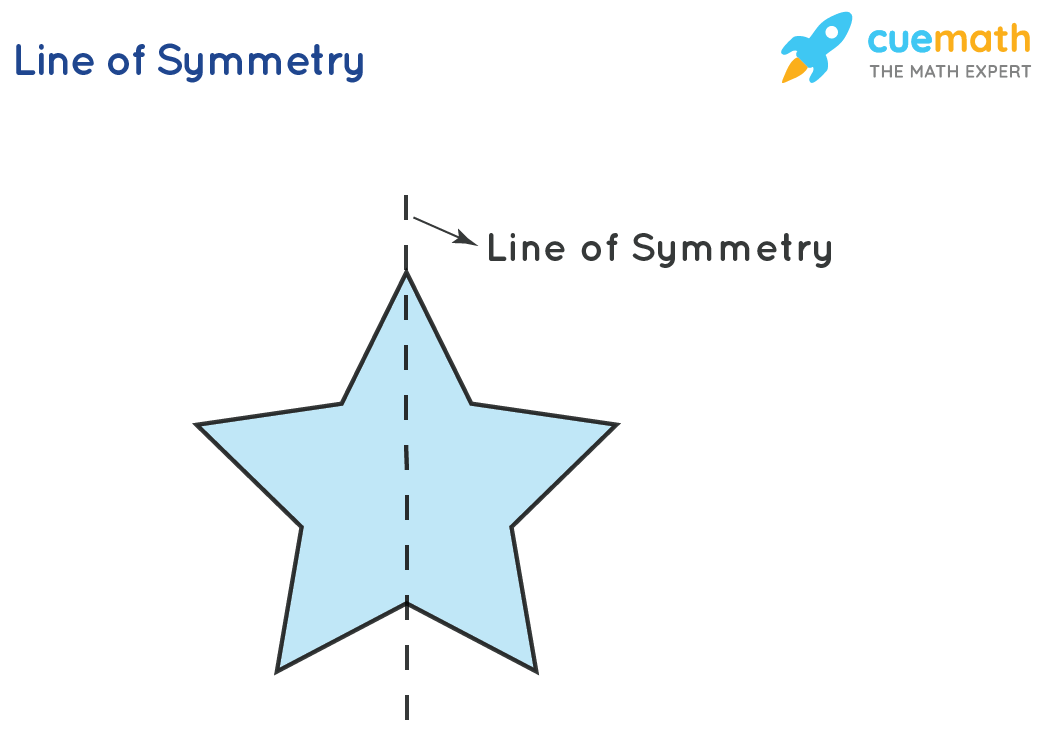 The line of symmetry can be categorized based on its orientation as: 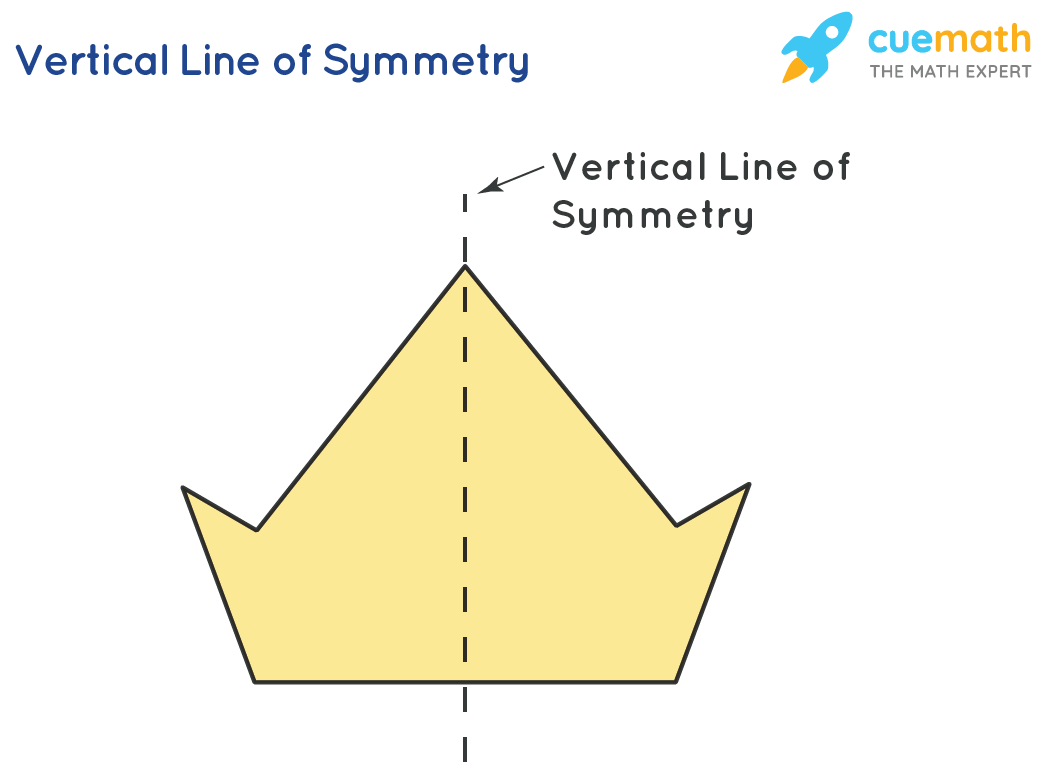 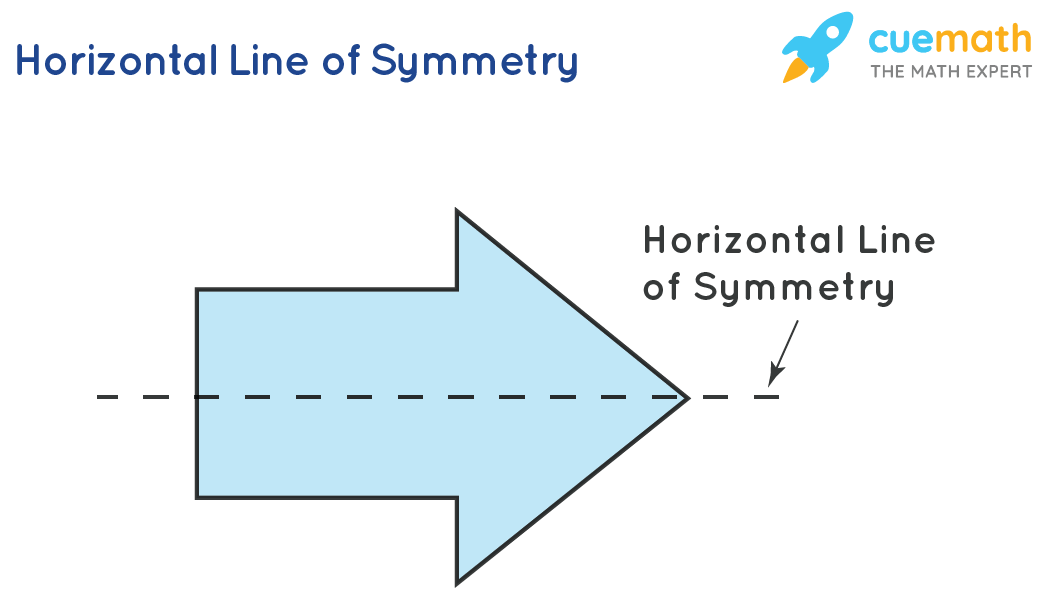 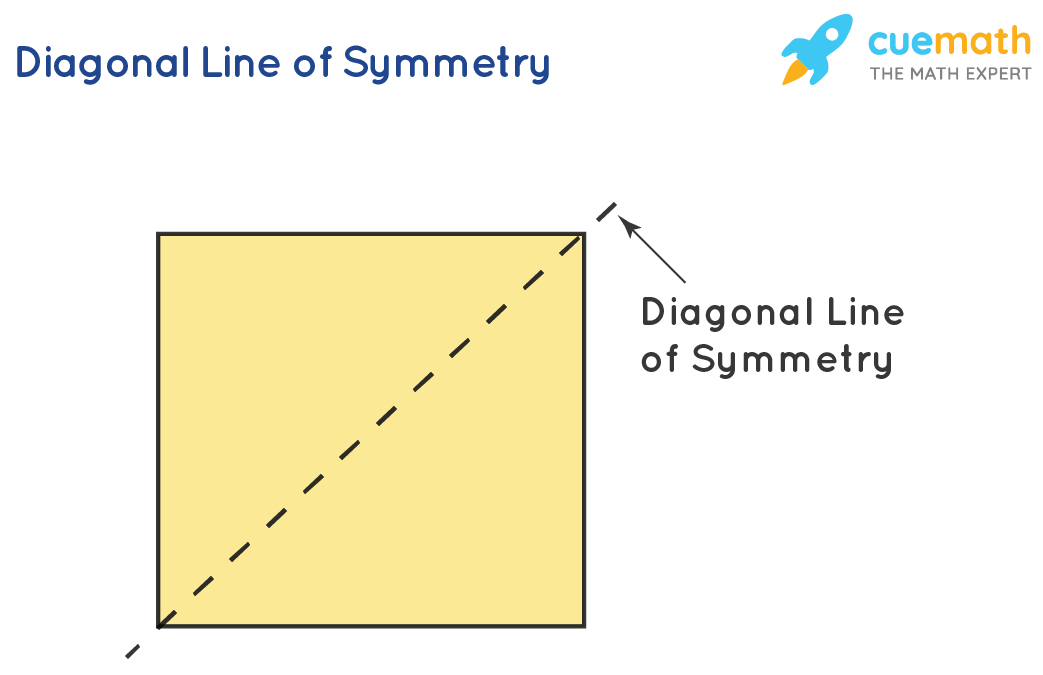 A line of symmetry is an axis along which an object when cut, will have identical halves. These objects might have one, two, or multiple lines of symmetry.

One Line of Symmetry

The following table shows the examples for different shapes with the number of lines of symmetry that they have.

Symmetry can be viewed when you flip, turn or slide an object. There are four types of symmetry that can be observed in various cases.

If an object is moved from one position to another, with the same orientation in the forward and backward motion, it is called translational symmetry. In other words, translation symmetry is defined as the sliding of an object about an axis. For example, the following figure, where the shape is moved forward and backward in the same orientation by keeping the fixed axis, depicts translational symmetry. 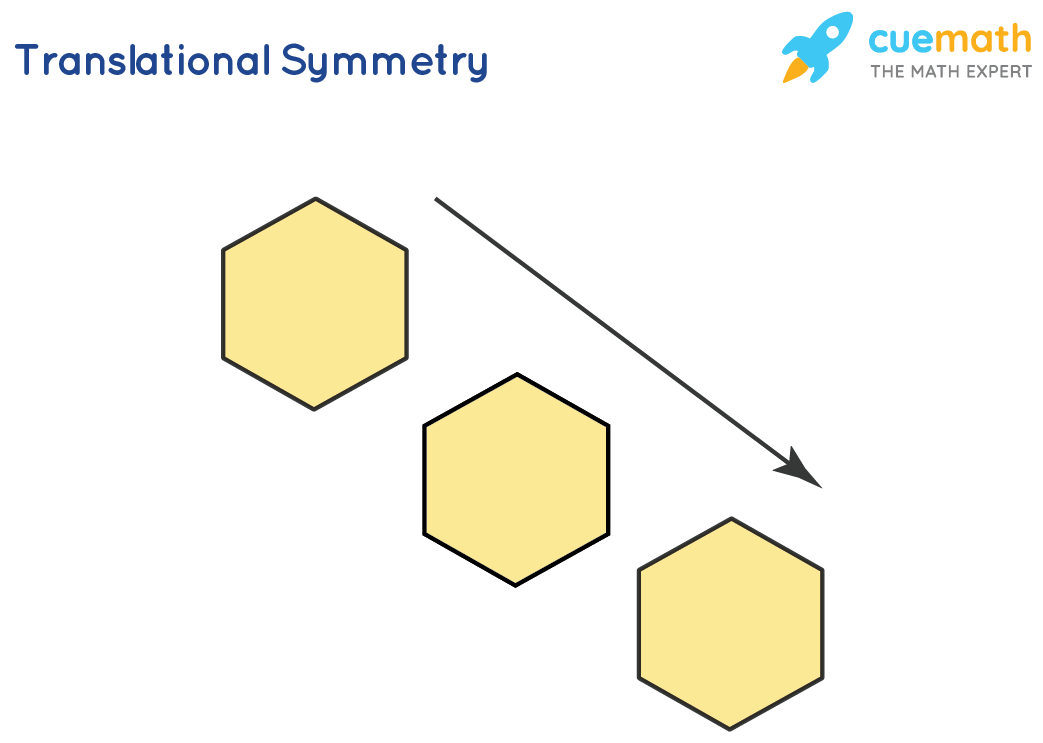 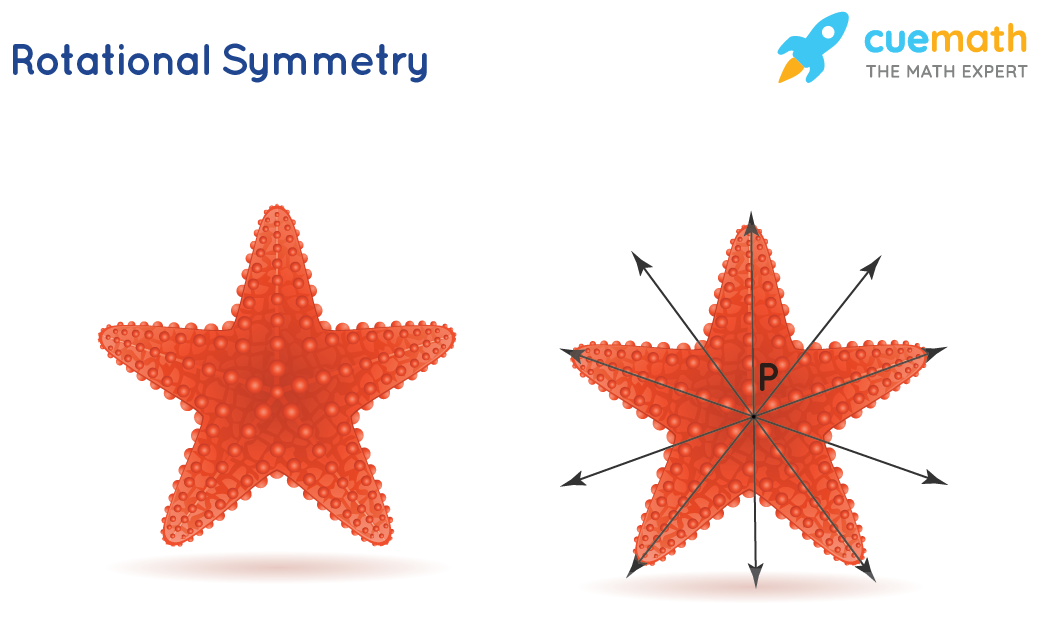 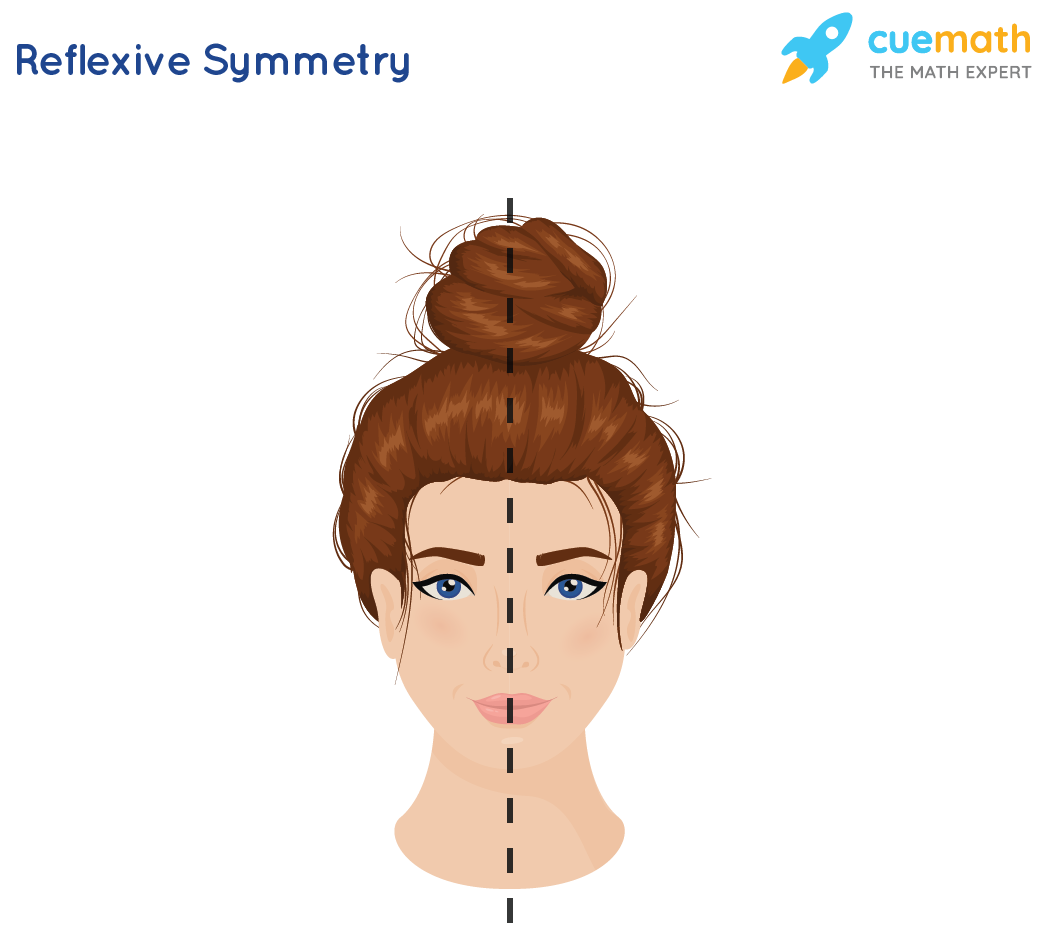 What is Point Symmetry? 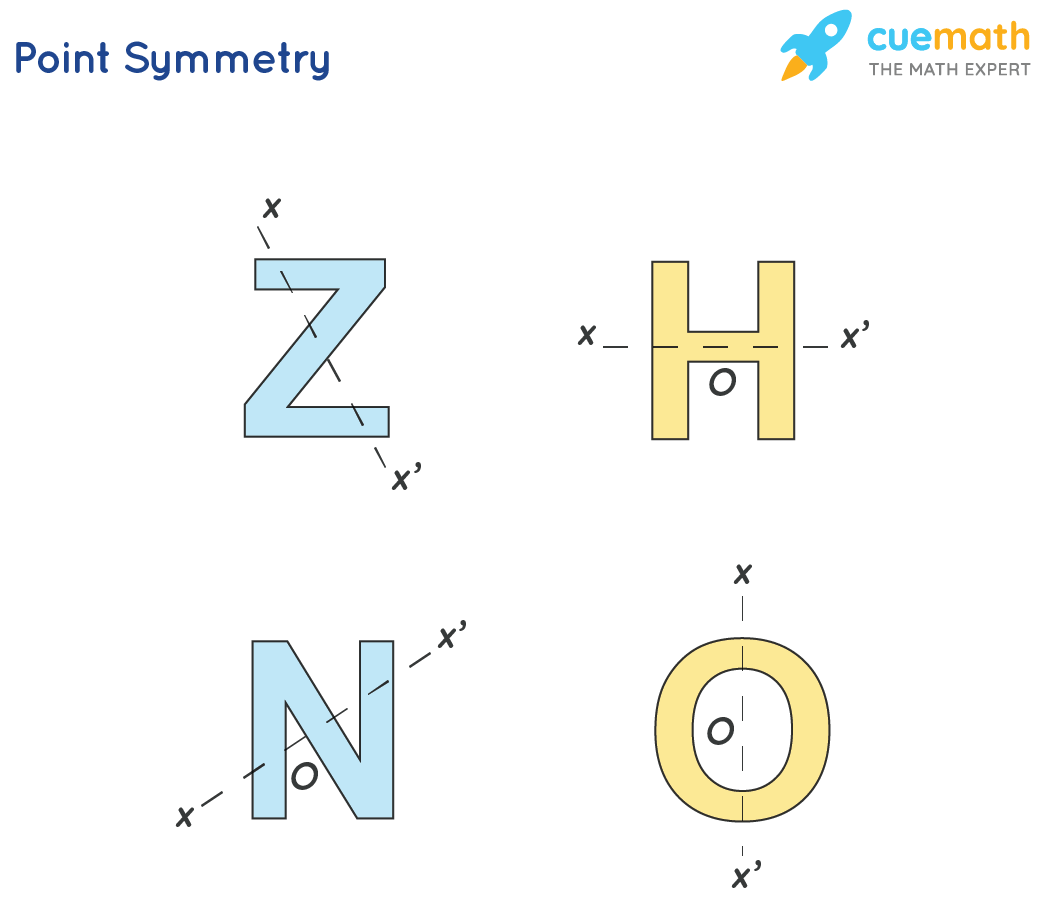 If an object looks the same when you turn it upside down, then it is said to have point symmetry. The shape and the matching parts must be in opposite directions.

Given below are some important points related to the concept of symmetry:

Listed below are a few topics that are related to symmetry.

What is Symmetry in Math?

Symmetry is defined as a proportionate and balanced similarity that is found in two halves of an object, that is, one-half is the mirror image of the other half. For example, different shapes like square, rectangle, circle are symmetric along their respective lines of symmetry.

What is a Symmetrical Shape?

A 2D shape can be called symmetrical if a line can be drawn through it and either side is a reflection of the other. For example, a square has a symmetrical shape.

What are the 4 Types of Symmetry?

Symmetry can be categorized into four types:

What is the Symmetry Meaning? Explain With an Example.

When an object is exactly the same when you turn it or flip it, that object has symmetry. Symmetrical objects are of the same size and shape. Nature has plenty of objects having symmetry. For example, the petals in a flower, a butterfly, etc.

What is a Symmetric Pattern?

What Do you Mean by a Line of Symmetry?

Can a line of symmetry be parallel?

No, the line of symmetry cannot be parallel. All lines of symmetry drawn for any shape will always coincide with each other.