In math, a rate is a ratio that compares two different quantities which have different units. For example, if we say John types 50 words in a minute, then his rate of typing is 50 words per minute. The word "per" gives a clue that we are dealing with a rate. The word "per" can be further replaced by the symbol "/" in problems. Let us consider an example of a car that is traveling at a speed of 150 miles in 3 hours. This can be expressed as 150 miles divided by 3 hours which is equal to 150 miles/3 hours or 50 miles/hour. Here the word 'per' means for every hour. 50 miles/ hour is the average speed at which the car travels. 50 miles/hour is an example of a unit rate. Let's learn about the unit rate in the next section.

The unit rate is different from that of a rate, in which a certain number of units of the first quantity is compared to one unit of the second quantity. In other words, we can say that the second quantity in the comparison is always 1. For example, in one minute there are 60 seconds. Therefore, as a unit rate, we can express it as 60 seconds per minute. Here, the word 'per minute' refers to one minute. Some other examples include walking for 30 minutes per day, reading 20 pages per hour.

Rate and ratio are completely different yet related terms in math. The key differences between the two terms are listed below. 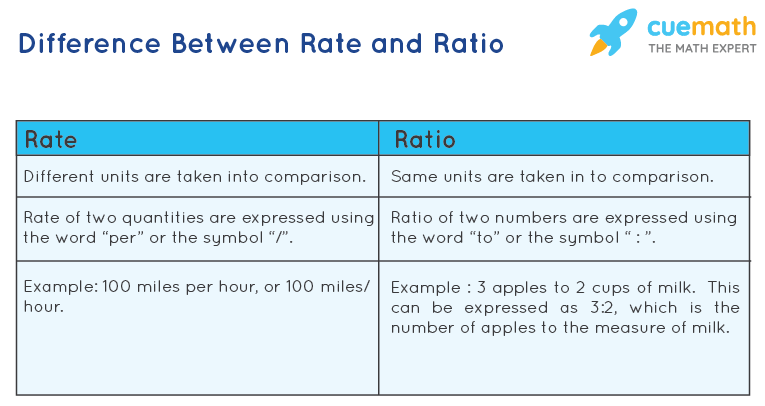 A few examples of rate are given below:

How is Rate Calculated?

In general, we can write down the formula for rate as the ratio between two quantities with various units. Putting this in the ratio format, we get,

For example, the steps to be followed to calculate the rate are given below.

Let us take an example to understand this better. Ben rode his bike for 2 hours and traveled 24 miles. To calculate the speed at which he rode, let us use the formula for rate. which is, Rate = Quantity 1 / Quantity 2. Given, quantity 1 = 24 miles, quantity 2 = 2 hours. Substituting the values in the formula, we get, Rate = 24 miles/ 2 hours. Here, the speed is the rate.
So, rate = 12 miles/hour or 12 miles per hour.

Unit rate is also a comparison between two quantities that have different units except for the fact that the quantity in the denominator is always one. Putting this in the ratio format, we get, Unit Rate = Quantity 1 / One Unit of Quantity 2. The rate "miles per minute" gives the distance traveled per unit of time. In order to calculate the unit rate, we divide the denominator with the numerator in such a way that the denominator becomes 1. For example, if 260 miles are covered in 2 hours, the unit rate will be 260 miles/2 hours which is equal to 130 miles/hour. In other words, the denominator is always 1 in a unit rate. Other examples of unit rate are revolutions/minute, salary/month, frequency/minute.

Check out some interesting topics related to rate definition in math.

What is the Definition of Rate?

When two quantities of different units are compared and expressed as a ratio, we refer to it as 'Rate'. For example, the distance traveled in a particular amount of time is expressed as 'total distance/time taken to travel'. If 100 miles are traveled in one hour, then we express it as 100 miles per hour. The word 'per' or the symbol '/' is used to denote rate.

What is Unit Rate Definition?

A unit rate is defined as a ratio that compares the first quantity to one unit of the second quantity. The two quantities being compared have different units. For example, if a person types 500 words in an hour, then it is expressed as 500 words per hour or 500 words/hour. Here, we can observe that the denominator is 1.

What is Simple Interest Rate Definition?

In the context of simple interest, rate is defined as the percentage of the money that is paid by a borrower to a lender on a per annum basis. For example, if a person borrows $1000 dollars on a rate of interest of 10%, then at the end of a year, the amount to be paid back to the lender is $1100. Here, 10% is the rate of interest.

What is the Definition of Rate in Math?

Rate is usually defined as a ratio of two quantities with different units. Usually, the rate is written as a fraction, with the first quantity as the numerator and the second quantity as the denominator. We can express the rate by reducing them to the lowest form possible. For example, if a person takes 30 steps in 20 seconds, then the rate at which they walk is 30 steps/20 seconds or 3 steps/2 seconds.

What is the Difference Between a Rate and a Percentage?

A rate is a comparison of two numbers with different quantities or units. A percentage is a ratio or the rate out of a hundred.

What are Three Examples of Rate?

Distance per unit time, quantity per cost, number of heartbeats per minute are three examples of rate.

What is the Difference Between Rate and Unit Rate?

Rate is the ratio of two different quantities with different units, whereas unit rate expresses the number of units of the first quantity for one unit of the second quantity. In unit rate, the denominator is always of one unit. An example of unit rate is 50 miles per hour, which means 50 miles are covered in one hour, whereas, 1000 miles/10 hours, is an example of rate and not unit rate.