In a circle, there are various angles that can be formed joining the endpoints of arcs and those angles are termed subtended angles. There are different categories of angles formed by these arcs, for example, angles in the same segment, angles in a semi-circle, angles at the circumference, etc. Let's learn about it in detail in this lesson.

How do you Find the Angle Subtended by an Arc in Circle?

An arc of a circle is any part of the circumference. The angle subtended by an arc at any point is the angle formed between the two line segments joining that point to the end-points of the arc. In the following figure, an arc of the circle shown subtends an angle α at a point on the circumference, and an angle β at the center O. 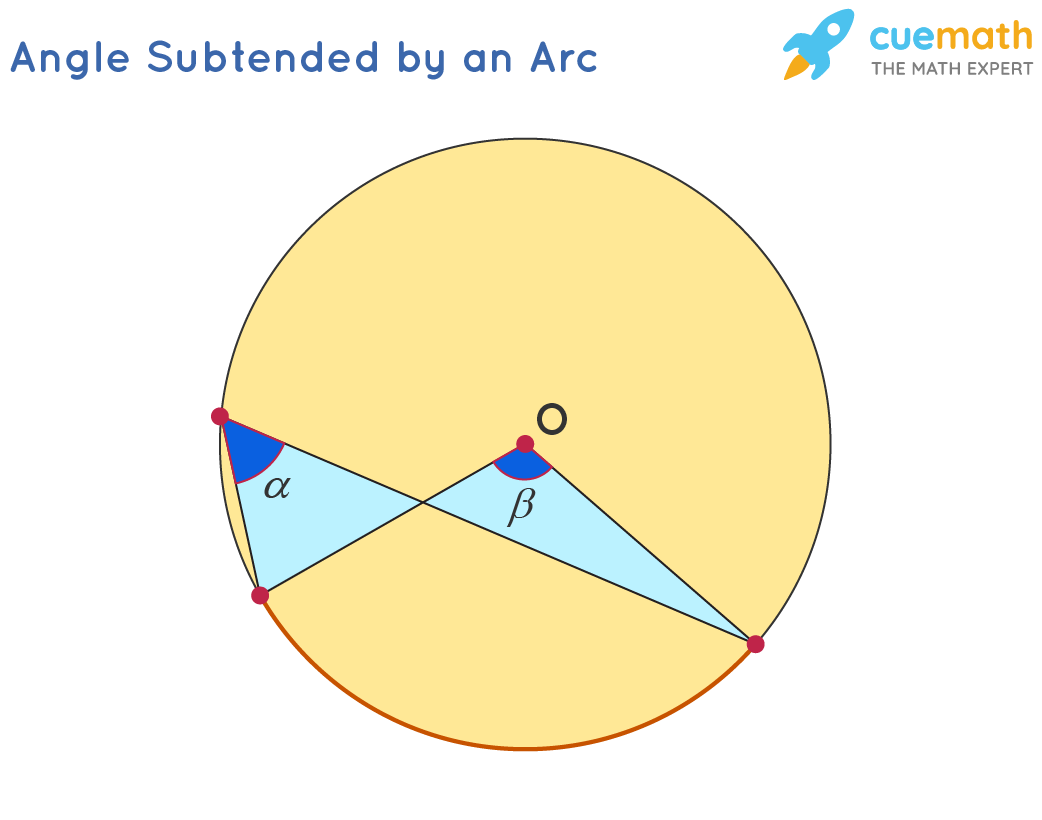 Angle Subtended by an Arc at the Center

At the center of a circle, if there are two line segments originated from the end-points of the arc of the circle intersect, that angle is called an angle subtended by the arc at the center. Let us understand a theorem and its proof based on it.

The angle subtended by an arc of a circle at its center is twice the angle it subtends anywhere on the circle’s circumference.

Consider the following figure, in which an arc (or segment) AB subtends ∠AOB at the center O and ∠ACB at a point C on the circumference. 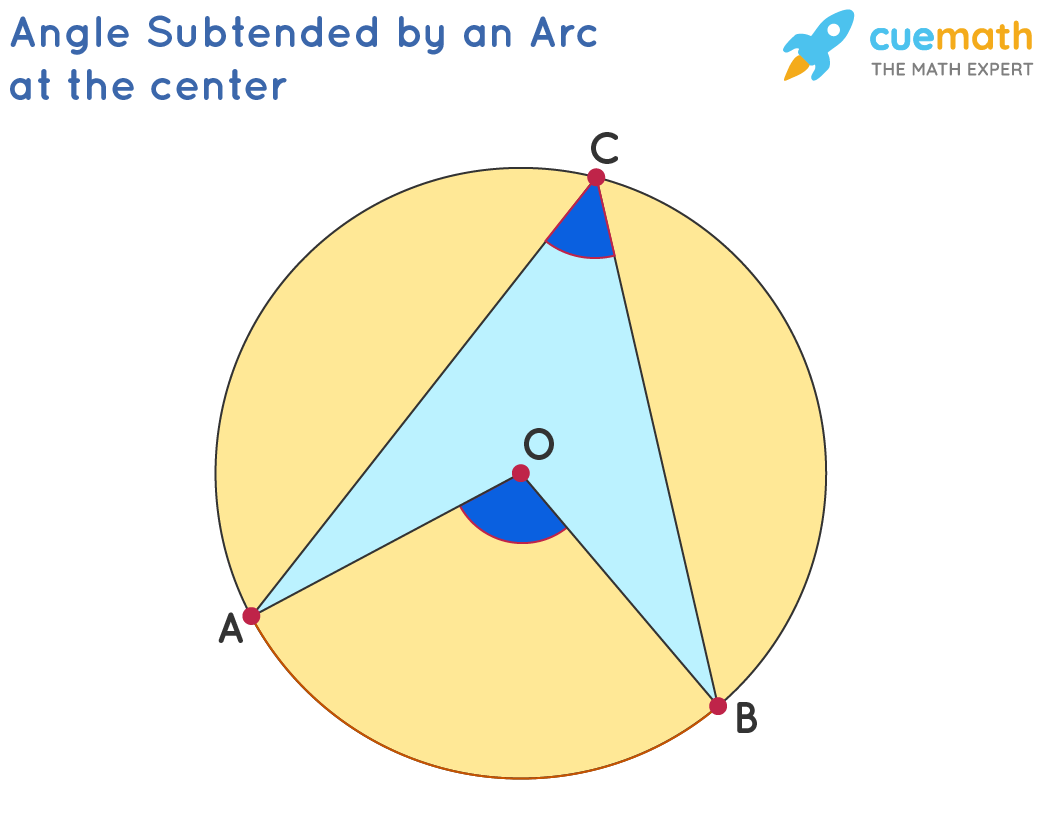 We have to prove that ∠AOB = 2 × ∠ACB. Draw the line through O and C, and let it intersect the circle again at D, as shown. 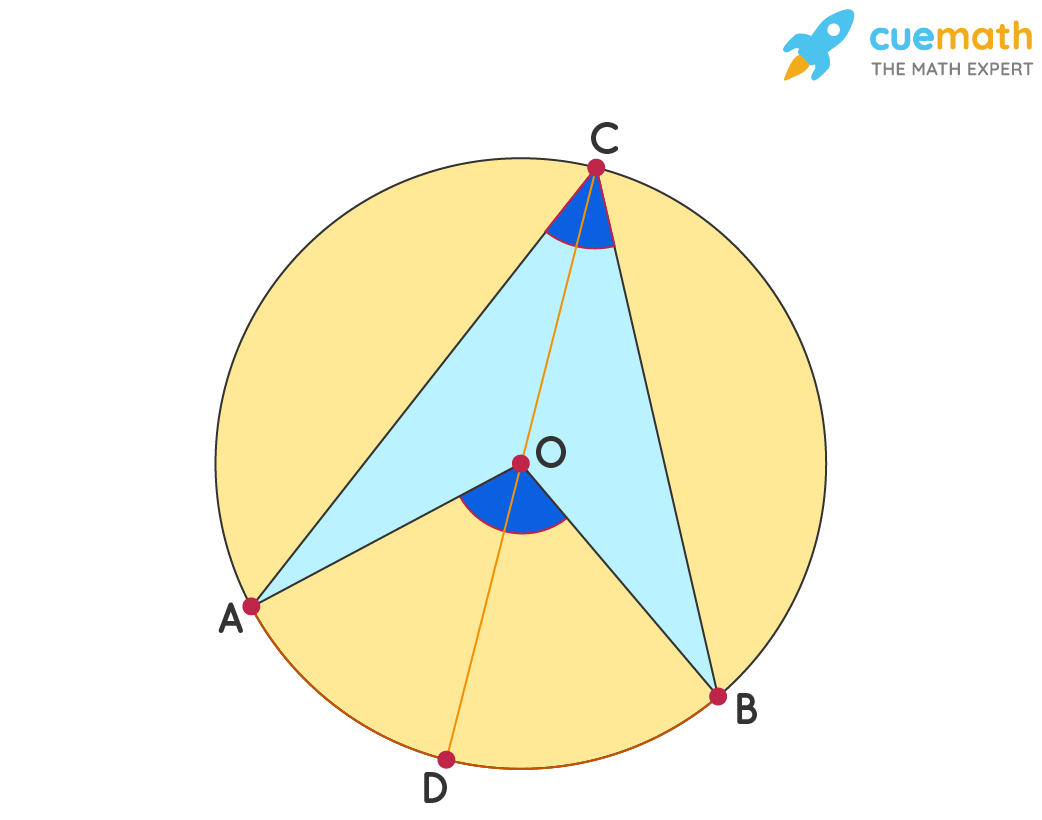 There are two triangles formed ΔOAC and ΔOBC. So, we make the following observations.

Hence, using the exterior angle theorem, we get,

This completes the proof of the theorem. You can experiment with the simulation below to understand the relationship between the angles subtended by an arc at the center and at a point on the circle.

What if arc AB is such that it subtends a reflex angle at the center? Well, our proof doesn’t change, as the following figure shows. 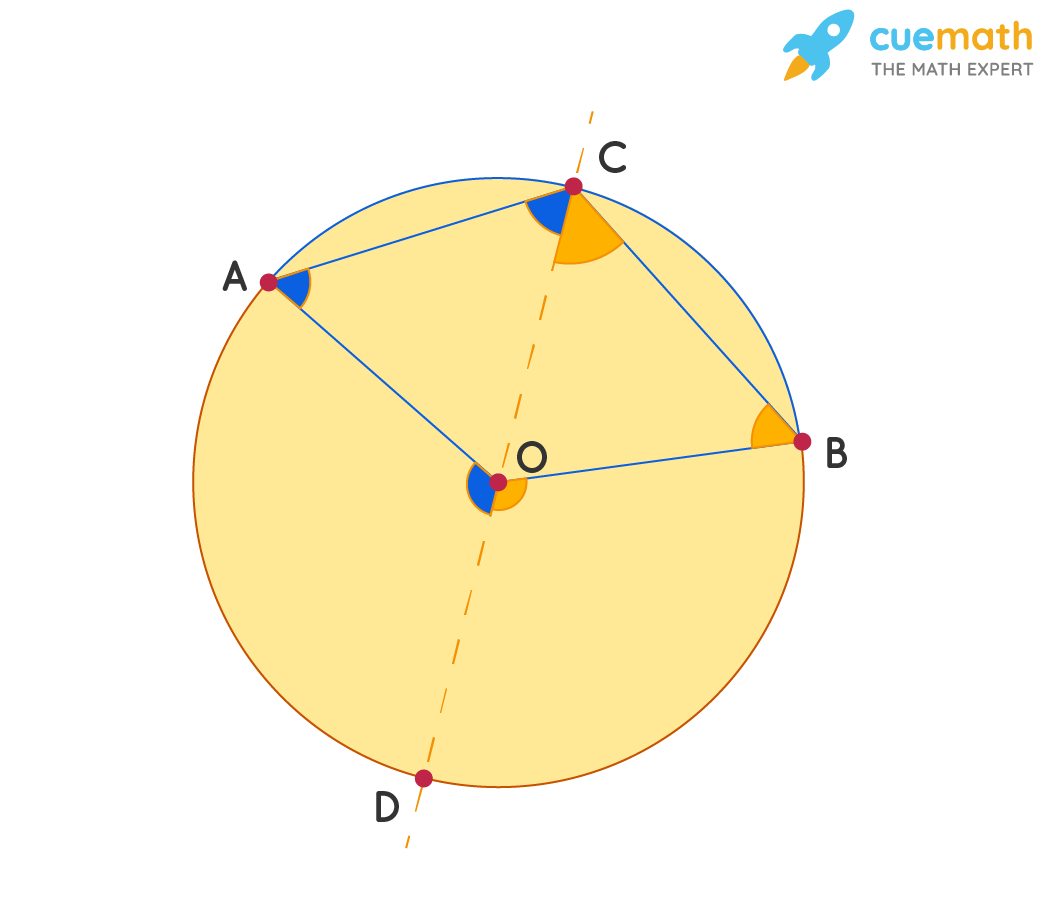 You can now apply exactly the same steps as we did earlier and arrive at the same result: ∠AOB= 2× ∠ACB. Another configuration would be when O does not lie within ∠ACB. Will the result still hold, as in the following figure? 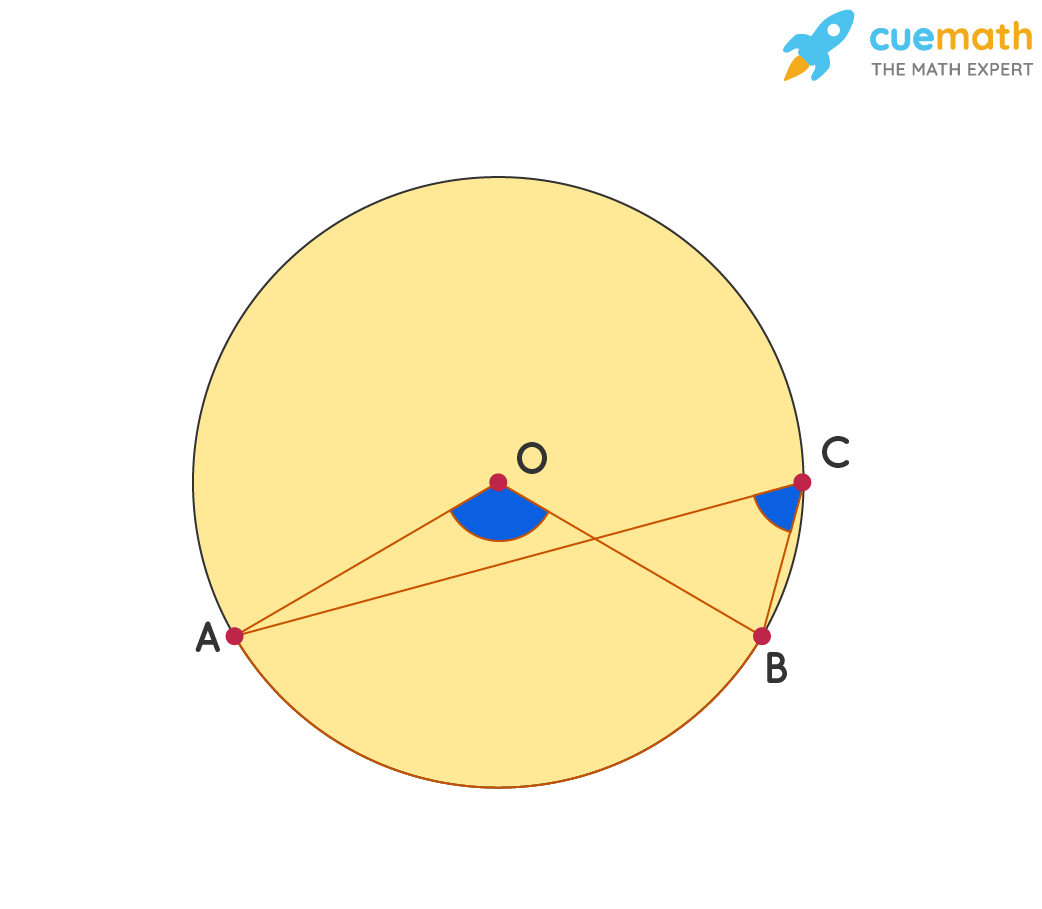 Yes, it will. Join C to O again and extend it to D on the circumference of the circle. 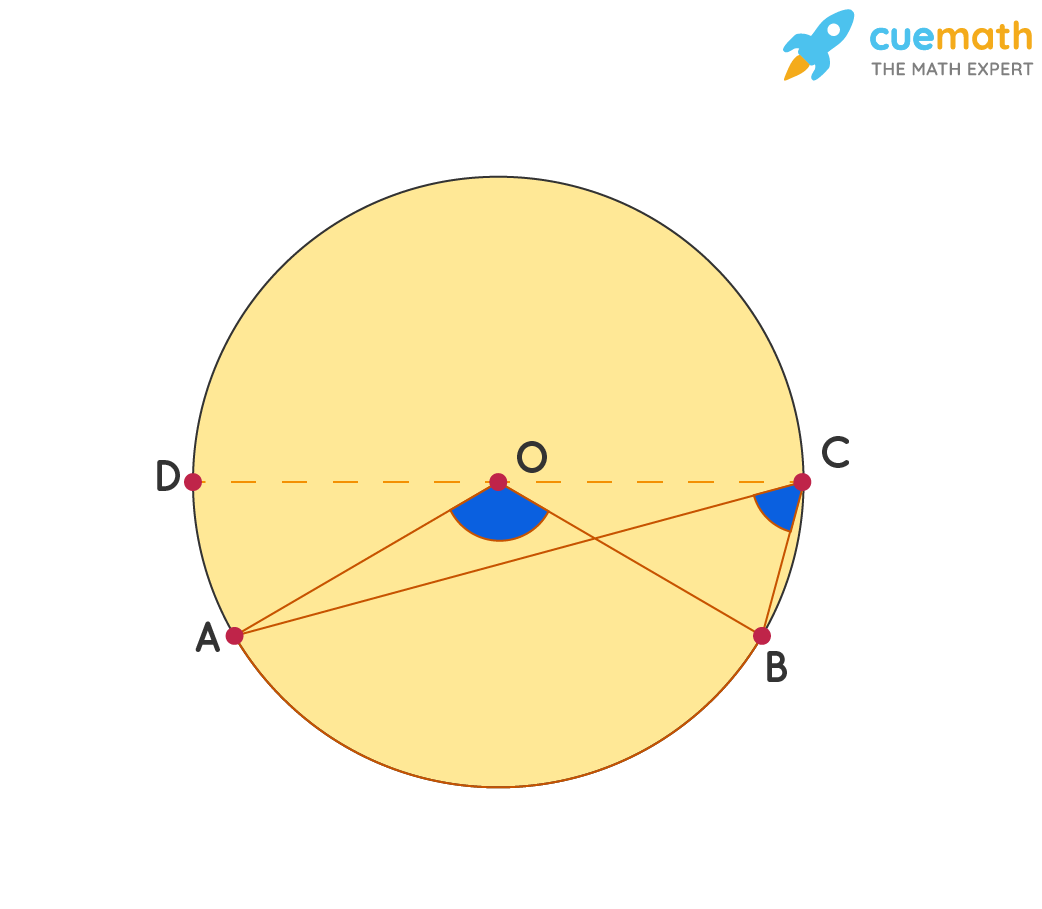 Use the Exterior Angle Theorem again and note that,

To avoid cluttering, these angles have not been highlighted in the figure, but make sure you observe them carefully. Subtract Equation (2) from (1)

This theorem leads to an interesting corollary, which is discussed next.

The angle in a semi-circle is a right angle. Consider the figure below, where AB is the diameter of the circle. We need to prove that ∠ACB= 90∘ 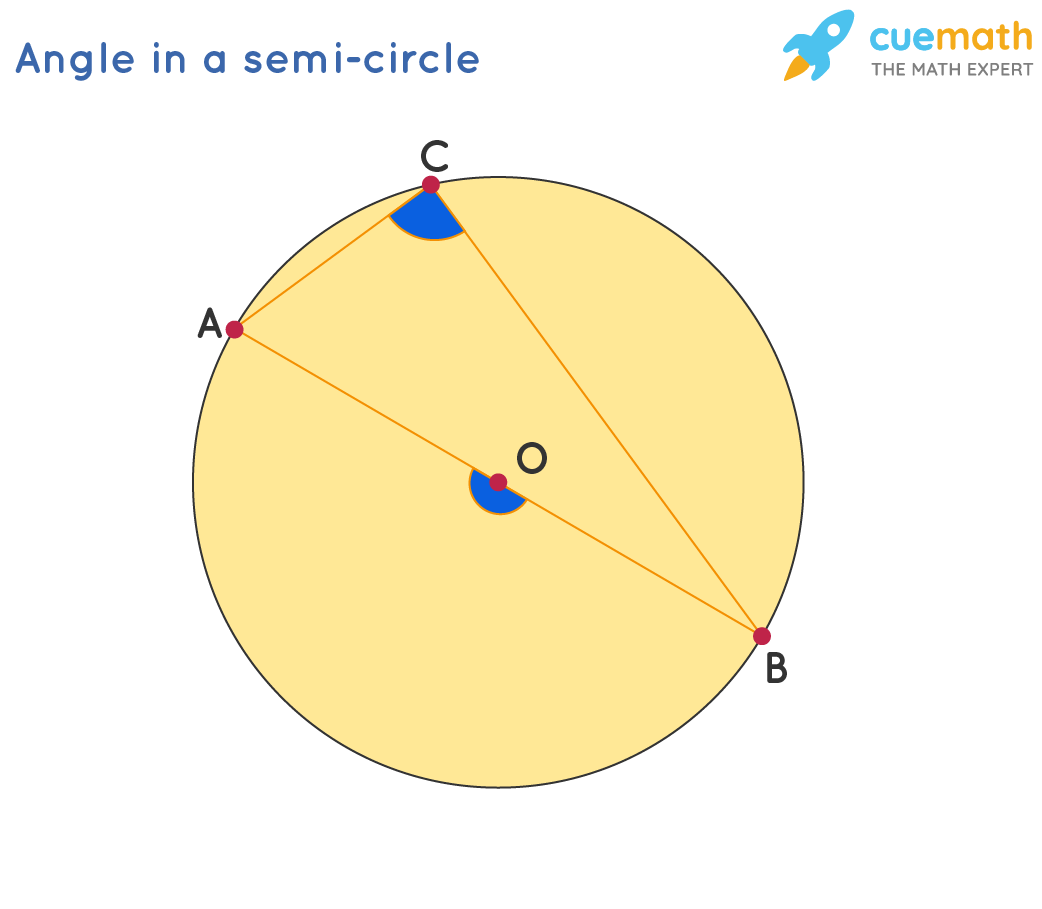 This theorem also leads to the following result.

Angles in the Same Segment of a Circle are Equal

In a circle, there are two segments- major segments and minor segments. Angles formed by the endpoints of the chord in either major or minor segments are always equal. Let's understand this theorem and its proof in detail.

Angles in the same segment of a circle are equal. In other words, an arc in a circle will subtend equal angles anywhere on the circumference. Consider the following figure, which shows an arc AB subtending angles ACB and ADB at two arbitrary points C and D on the circumference. O is the center of the circle. 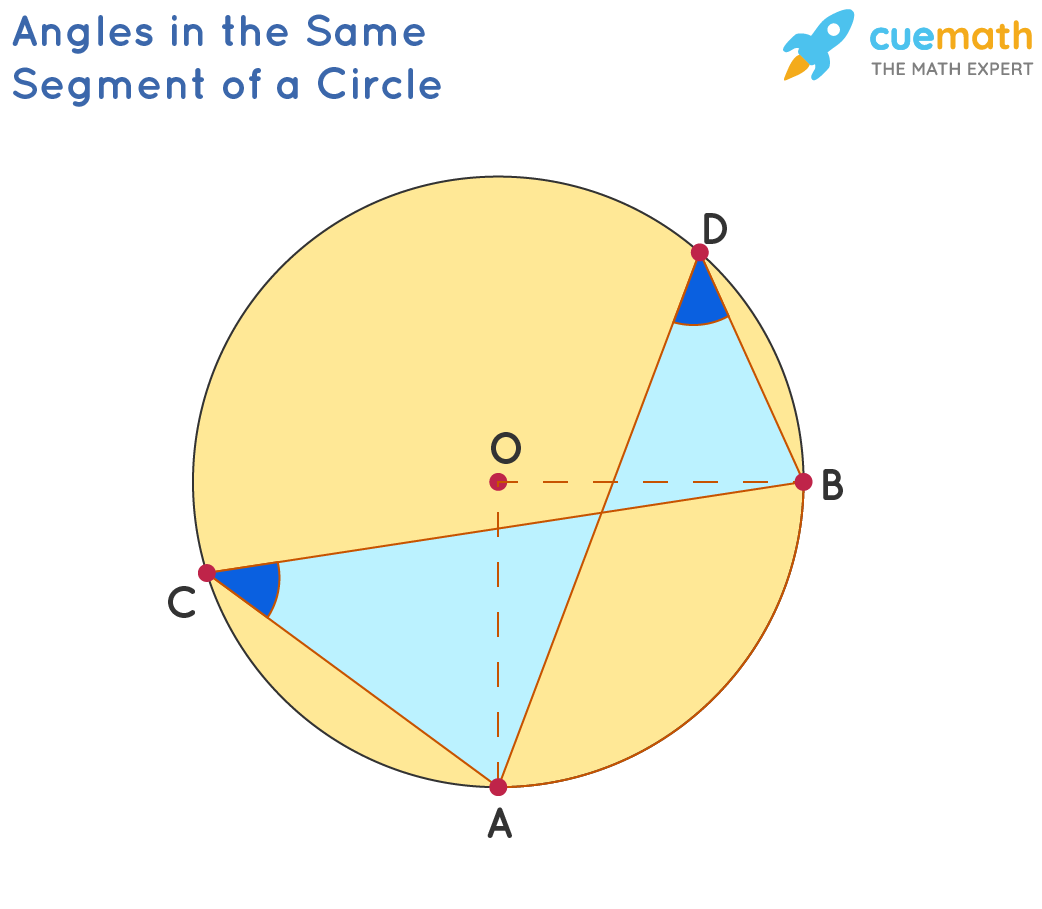 Using our previous theorem, we have that

FAQs on Arcs and Subtended Angles

What is the Meaning of Subtended?

In Geometry, subtended means to extend under. A subtended angle is formed by the intersection of more than 1 line, or the rays joining the endpoints of a line or arc.

What is a Subtended Central Angle?

How do you Find the Angle Subtended by an Arc at the Centre?

What is the Central Angle of a Circle?

The central angle of a circle is that angle whose vertex is the same as the center point of the circle. The other two arms are the radius which meets the endpoints of any chord or arc of the circle.

What is Arc in Circle?

In a circle, the arc can be defined as any portion of the boundary. It is a curve that forms the circumference of a circle. In other words, we can say that circumference is a complete or closed arc of the circle.

What is the Measure of Angle in a Semi-circle?

The angle in a semi-circle is always 90º. Arc drawn from the endpoints of the diameter of a circle always form a 90º angle on its circumference.