What is Factoring Trinomials?

Two integers such as r and s are considered to factor a trinomial, whose sum is b and whose product is ac. We can rewrite the trinomial as ax2 + rx + sx + c and then use grouping and the distributive property to factor the polynomial. After the trinomial is undergone the process of factoring, the expression becomes a binomial in the form (x + r) (x + s). Here is an image to understand this better. 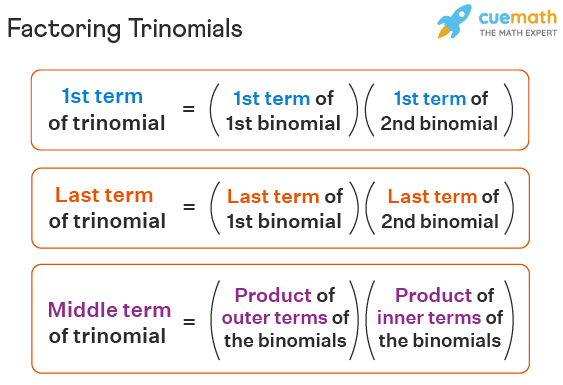 Factoring a trinomial means expanding an equation into the product of two or more binomials. It is written as (x + m) (x + n). A trinomial can be factorized in many ways. Let's discuss each case.

Quadratic Trinomial in One Variable

Step 1:- First multiply the coefficient of x2 and the constant term.

Step 2:- Break the middle term -4x such that on multiplying the resulting numbers, we get the result -12 (obtained from the first step).

Step 3:- Rewrite the main equation by applying the change in the middle term.

Step 4:- Combine the first two terms and the last two terms, simplify the equation and take out any common numbers or expressions.

There is no specific way to solve a quadratic trinomial in two variables. Let's take an example.

Step 1: These types of trinomials also follow the same rule as above, i.e., we need to break the middle term.

Step 2: Simplify the equation and take out common numbers of expressions.

If Trinomial is an Identity

Let's see some algebraic identities that are mentioned in the table below:

Step 1: Identify which identity can be applied in the expression.

Step 2: Rearrange the expression so that it can appear in the form of the above identity.

Step 3: Once the expression is arranged in the form of the identity, write its factors.

Let us look at an example.

Step 1: Compare the given equation with the standard form to obtain the coefficients.

When the trinomial needs to be factorized where the leading coefficient is not equal to 1, the concept of GCF(Greatest Common Factor) is applied. Let us see the steps:

In some situations, a is negative, as in −ax2 + bx + c. To make the factoring of the trinomial simpler, we factor out -1 from ax2 as the first step and factor the rest of the expression. Let us look at an example.

Step 1: Factor out -1 from the expression which changes the signs of the entire expression.

Step 2: Multiply the first term and the constant term.

Step 3: Break the middle term 8x such that on multiplying the resulting numbers, we get the result 12 (obtained from the previous step)

Step 4: Rewrite the middle term and group them.

Step 6: Write it as a binomial. 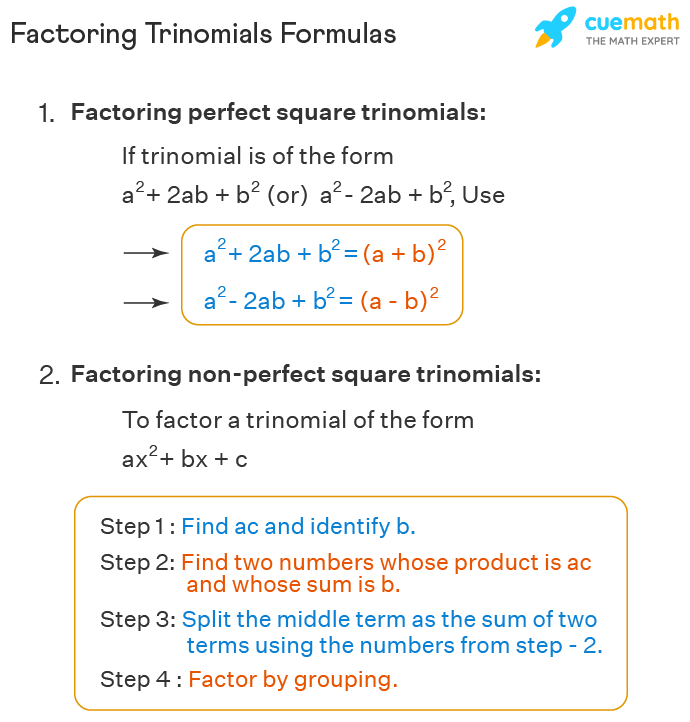 To factorize a trinomial of the form ax2 + bx + c, we can use any of the below-mentioned formulas:

Listed below are a few interesting topics that are related to factoring trinomials, take a look.

What is Factoring Trinomials?

Factoring trinomials is the process of finding factors for a given trinomial expression. These factors are expressed in the form of binomials that are the sum and product of the terms in a trinomial. The general form of a trinomial is ax2 + bx + c which is converted to a binomial in the form of (x + m)(x + n).

How Do You Factor Trinomials?

A trinomial can be factored in the form x2 + bx + c. First, we need to find two integers (r and s) whose product sums up to c and through addition, it sums up to b. Once we find the two numbers, we rewrite the trinomial as x2 + rx + sx + c and use the grouping and distributive property of the factor to find out the factors of the expression. The factors will be (x + r) (x + s).

What is the Formula to Factor a Trinomial?

What are the Basic Rules to Factoring Trinomials?

The rules or points to remember while factoring a trinomial are:

What are the Algebraic Identities Used for Factoring Trinomials?

The three basic algebraic identities used in factorizing trinomials are:

How do you Factor a Perfect Square Trinomial?