A dot plot is used to encode data in a dot or small circle. The dot plot is shown on a number line that displays the distribution of numerical variables where a value is defined by each dot.

What is Dot Plot?

A dot plot is used to represent any data in the form of dots or small circles. It is similar to a simplified histogram or a bar graph as the height of the bar formed with dots represents the numerical value of each variable. Dot plots are used to represent small amounts of data. For example, a dot plot can be used to collect the vaccination report of newborns in an area, which is represented in the following table. 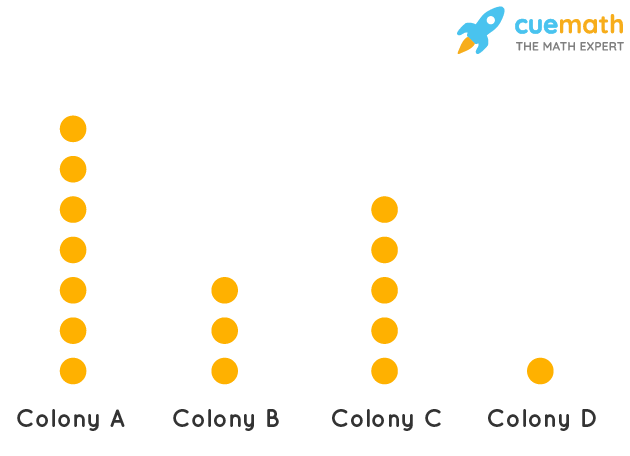 Now let's see the number of newborn babies who got a vaccine in each colony. Colony A has a total of 7 dots, which means that seven babies have been vaccinated. Similarly, colony B has three babies, colony C has five babies, and colony D has one baby who has been vaccinated. The other way to represent it through a dot plot is given below: 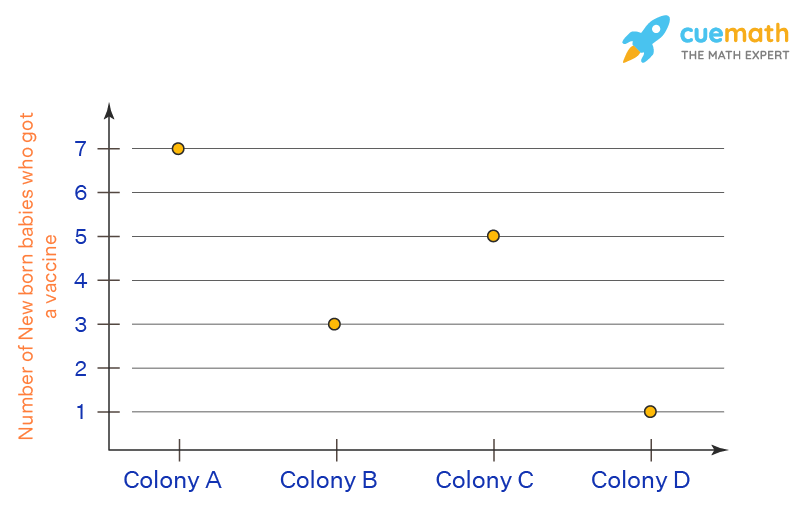 The Cleveland dot plot is a good alternative to a simple bar map if you have more than a few elements. It doesn't take much to look cluttered on a bar map. Many more values can be used in a dot plot in the same amount of space, and it's also simpler to read. This type of plot is similar to a bar chart but uses a location instead of the length of the bar formed by multiple dots. Just like how the height of the bar chart represents the number of items, the position of the dot on the number line or on the graph represents the number of items for that category. In the above example of vaccinated children in 4 colonies, the second graph showing only one dot for each colony is an example of a Cleveland dot plot.

How to Make a Dot Plot?

There are many ways to draw a dot plot but the best way is to draw it by hand. Let's understand with the help of an example. The data which is given below shows the number of books read by a number of kids during last summer holidays.

Follow the steps given below to make a dot plot:

Step 1: Select a scale and set it up.

We are going to create a horizontal scale, and all values must be enclosed. The smallest value is 0 for this data set and the largest is 9. Give the title on a number line number of books.

In this step, you will begin to fill in the dots using your scale for this stage. Keep in mind that "Each value gets a dot & dots are stacked”. To check this, let’s start by plotting only the first row of data. You can see that each value is defined by a dot on the plot and that we have 4 dots set on top of each other. Because there are 4 kids who read 0 books. Now, with the rest of the details, we can continue the operation. Keep in mind that while you can't do this perfectly by hand, you should try to make sure that the dots mostly match up. You do not want broad gaps between dots to make one value seem more prevalent than another.

That's really it! The dot plot is a great plot to use precisely because it is so easy to create and read for the representation of data. Note that our purpose is also to convey knowledge to others in statistics. The faster we are able to do this, the better. 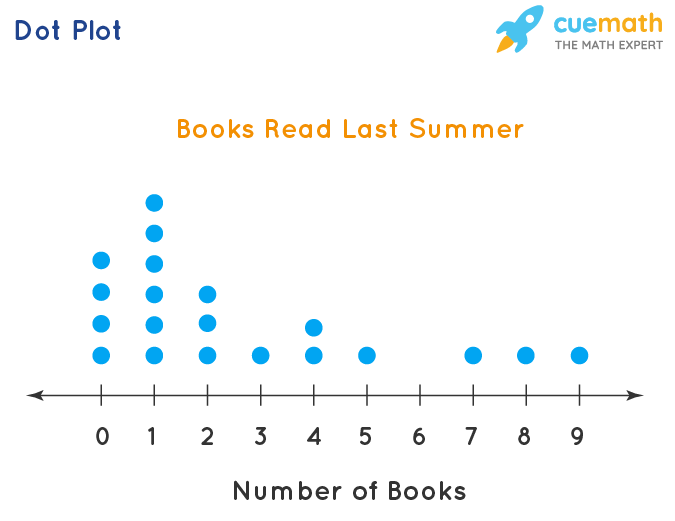 Given below are some of the important notes related to the dot plot. Have a look!

Check out these interesting articles to know more about dot plot and its related topics.

Where Dot Plot is Used for?

The dot plot is one of the types of graphical representation of data on a number line or a graph. It is commonly used when data is very small. It can be used to convey important information to the viewer or it can be used in schools to display any data. Dot plots are easy to draw and easy to read so they can be used in most places to display information. They are useful for highlighting clusters and gaps.

What is the Difference Between a Line Plot and a Dot Plot?

Line plots use the lines drawn to indicate the numerical value of each category in a data set whereas dot plot uses dots to show the amount of each number on a number line.

How do you Find the Mode on a Dot Plot?

In the case of a dot plot, the bin or container having the maximum number of dots is the mode of the given set.

Why would you use a Dot Plot instead of a Histogram?

In a dot plot we can illustrate or define each individual data observation but in a histogram data are grouped into classes and then plotted.

How do you Describe a Dot Plot?

The dot plot is a visual representation of a number line that shows the value that occurs a number of times in data using dots. Dot plots show peaks, and gaps in a data set.

What are Elements in Dot Plots?

The elements of dot plots for small data sets are:

When would you use a Dot Plot to Represent Data?

Dot plots are used for continuous quantitative data. Data points are labeled with dots on the number line. It is one of the easiest statistical plots and is fitted for small to medium-sized data sets.