Now, we discuss some other fundamental results related to circles.

Theorem: Equal chords of a circle are equidistant from its center.

The following figure shows two equidistant chords AB and CD of a circle with center O. The distances of the two chords are respectively OX and OY: 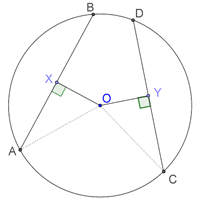 Converse: Two chords of a circle which are equidistant from its center must have the same length.

By the RHS criterion again, the two triangles are congruent, and hence AX = CY. Since OX and OY must also bisect AB and CD respectively (why?), we have

Thus, the two chords are of equal length.

We now talk about a more general result related to unequal chords.

Theorem: For two unequal chords of a circle, the greater chord will be nearer to the center than the smaller chord.

Visually speaking, this should be obvious. As your chord moves closer and closer to the center, it increases in length, as the following figure shows (the diameter is the largest possible chord in any circle): 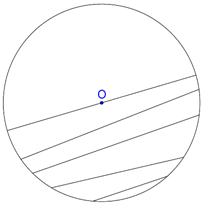 The following figure shows two chords AB and CD of a circle with center O, such that AB > CD. OX and OY are perpendiculars to the two chords from the center (this means that they will respectively bisect the two chords as well). We need to prove that OX < OY. We have joined OA and OC.

Proof: The proof involves a simple application of the Pythagoras theorem. We note that in \(\Delta\mathrm O\mathrm A\mathrm X\),

Thus, AB is nearer to the center than CD.