Protractor
Go back to  'Angles'

We use a protractor to measure angles.

A compass helps to construct an angle.

The divider is used to measure the length between two points.

Protractors have been in use since the seventeenth century. It is used for navigation in the sea and land.

Later by eighteenth century, protractors were widely used in geometry and mathematics. The common protractor is a simple, measuring instrument that is typically semicircle in shape with markings from \(0 ^\circ \) to \(180^\circ \) on it.

What is a Protractor Tool?

Protractor in maths is considered an important measuring instrument in the geometry box.

The protractor tool helps us measure an angle in degrees.

A radian scale protractor measures an angle in radians. 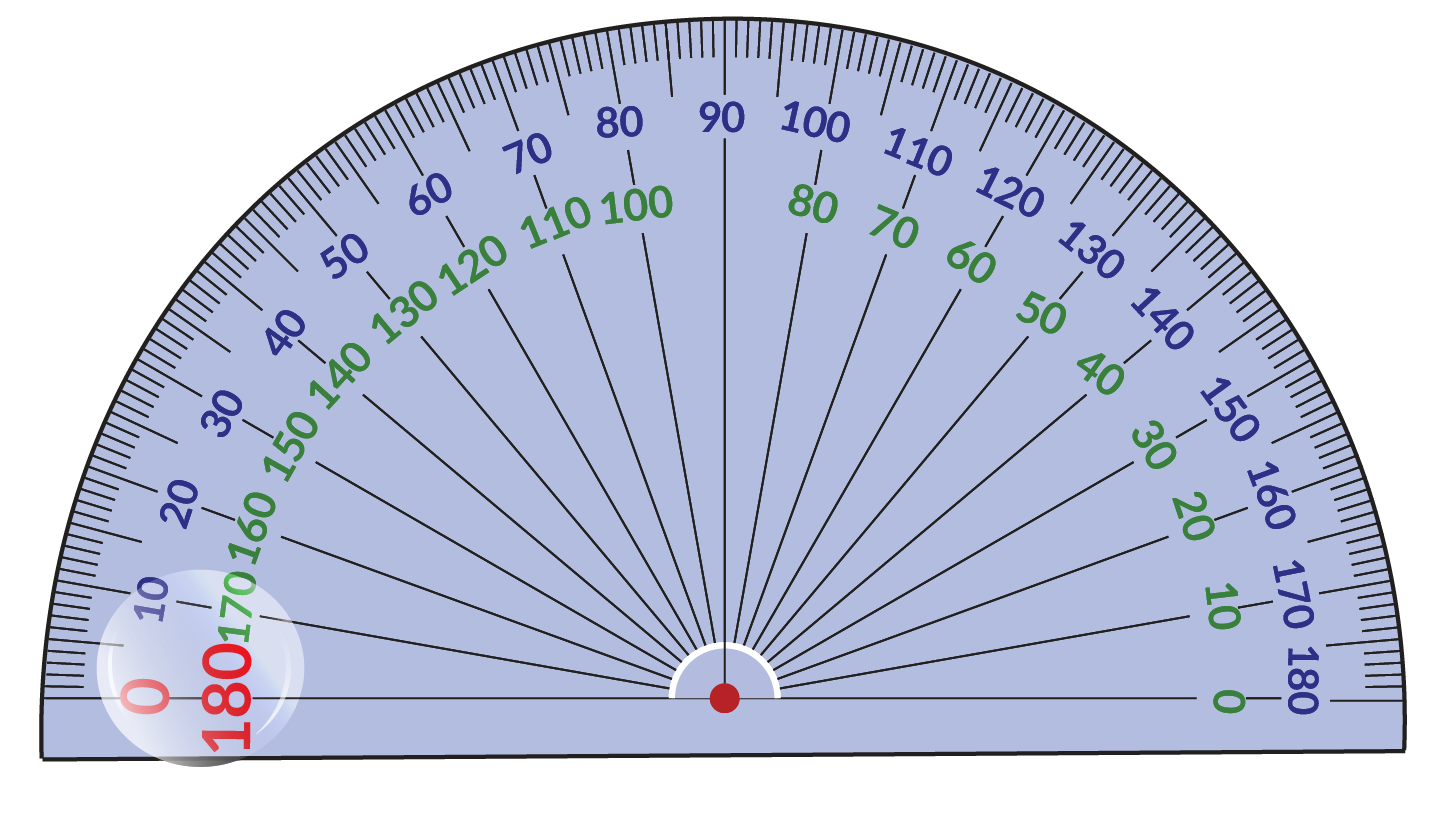 The inner readings and outer reading supplements each other. i.e, they add up to  \(180^ \circ\)

How to Use a Protractor?

An angle is formed between two rays.

Let us use the protractor and measure the angle \(\angle \text{COB}\).

Align the baseline of the protractor with the line \(\text{AB}\).

The center circle of the protractor at the vertex \(\text{O}\).

Now, identify the reading on the protractor where Ray \(\text{C}\) is extending. 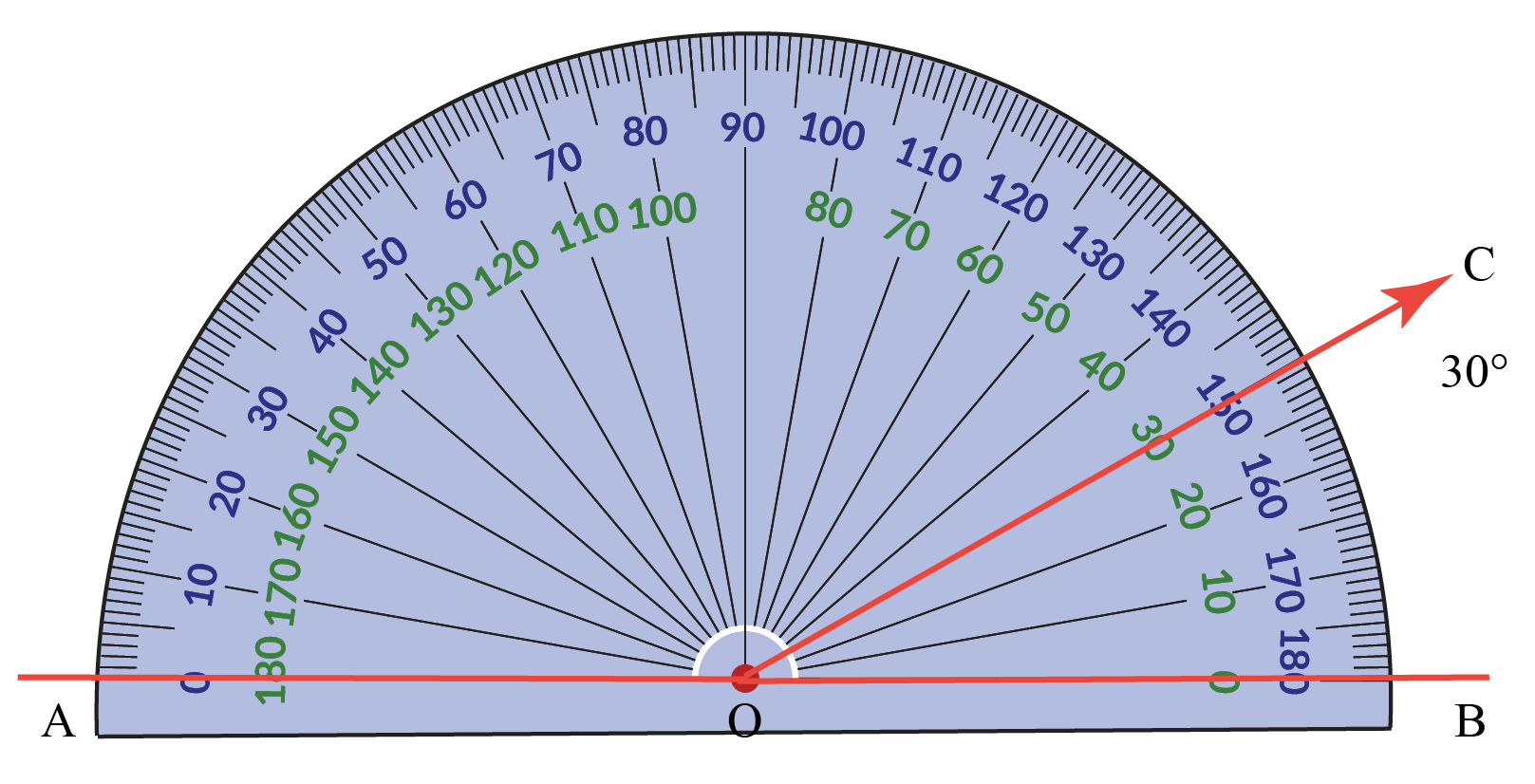 If the angle to be measured is rotated or tilted, tilt your protractor to align with the base ray \(\text{OA}\) and then measure. In the above image,

CLUEless in Math? Check out how CUEMATH Teachers will explain Protractor to your kid using interactive simulations & worksheets so they never have to memorise anything in Math again!

The usage of a protractor in maths is considered essential as it helps measure angles.

In the previous section, we learnt how to use a protractor.

Here is an interactive simulation for you to measure different angles.

Draw Angles with the Protractor 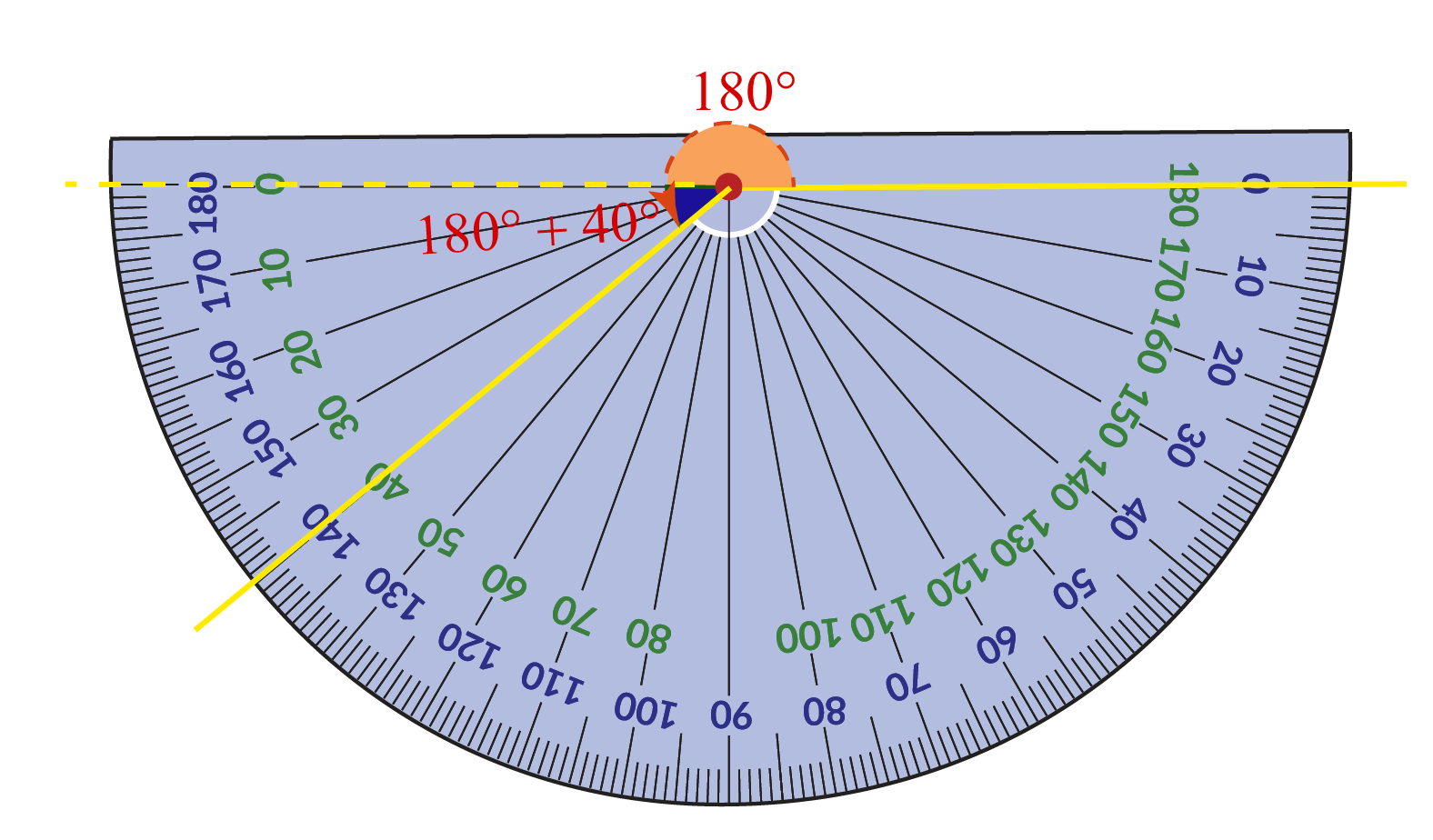 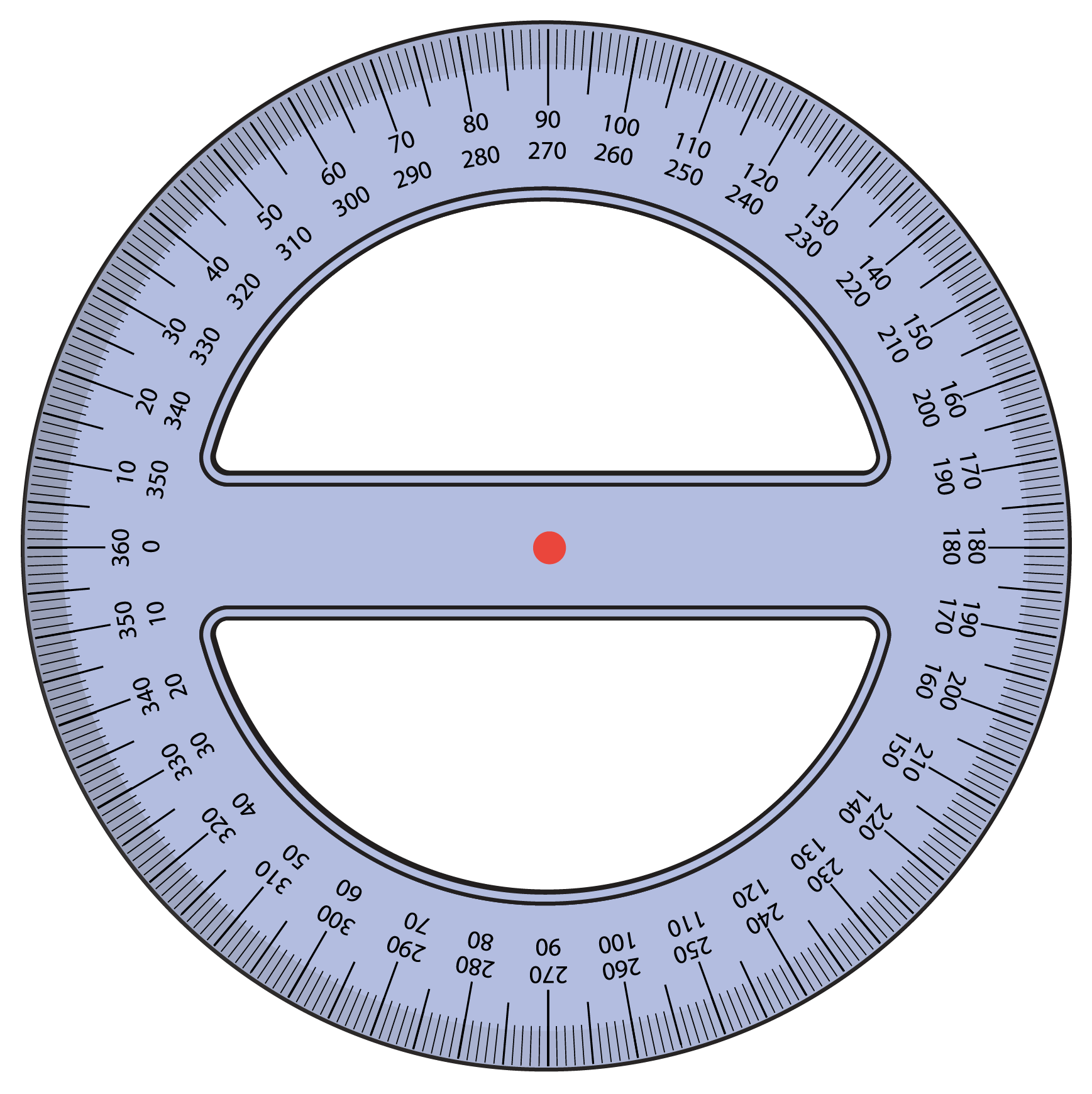 Observe the reading in the protractor which overlaps with line \(\text{AC}\). What is the angle formed between the two arms of the given pair of scissors? 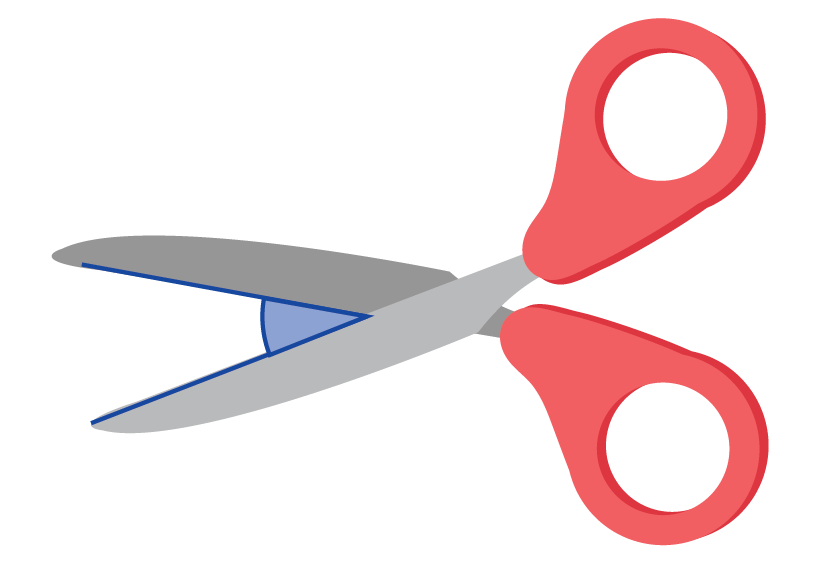 Place the protractor along one arm and measure the angle. 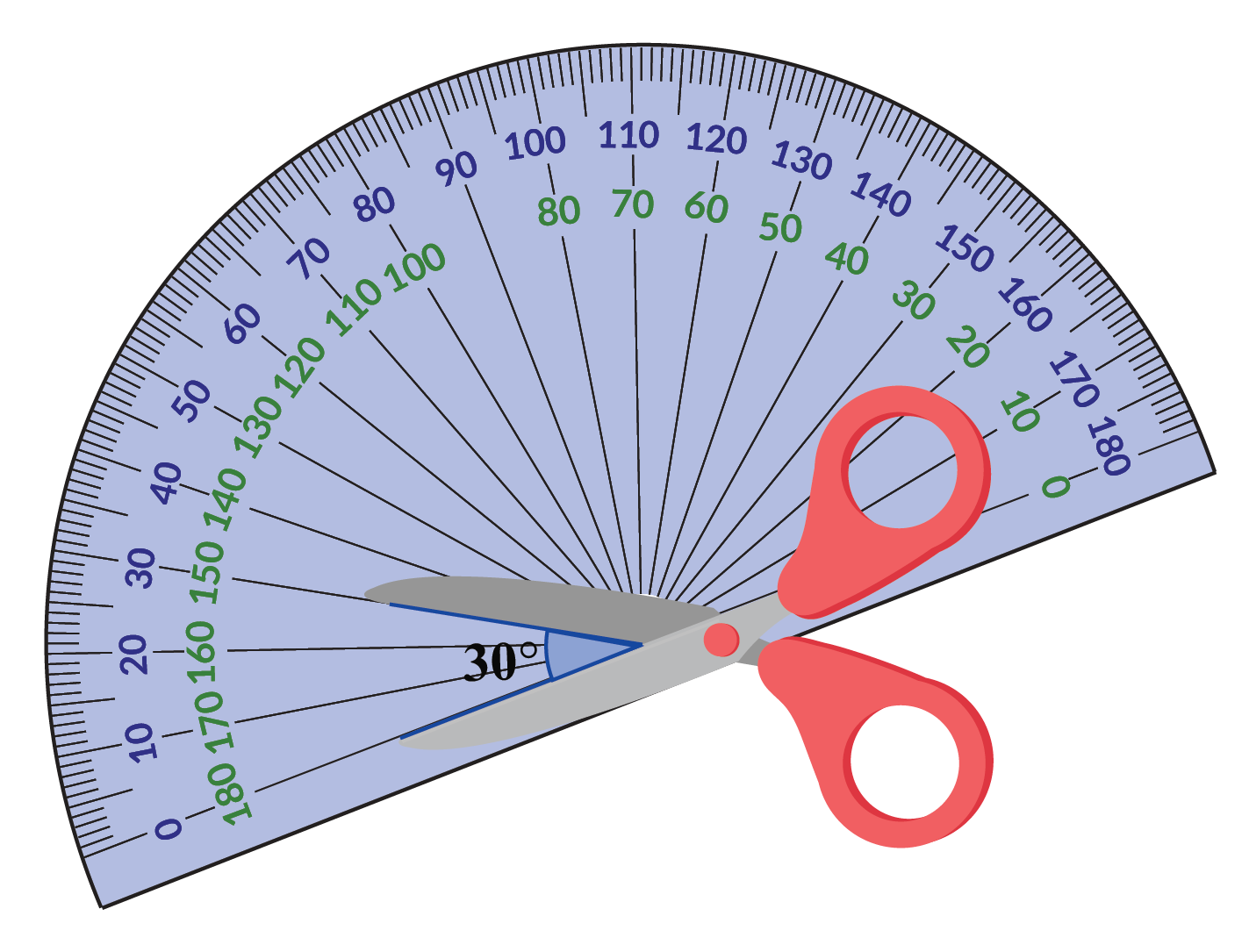 Place the protractor center at vertex \(\text{B}\) of the square and observe the reading. Use a protractor and verify if the angle beneath the staircase is \(140^\circ\). We can use a protractor and measure the given angle. 1. The center of the protractor (marked in the image below) has to align exactly with the vertex of the angle to be measured.

Even a little misalignment will result in an incorrect reading. 2. The baseline of the protractor has to align exactly over the line for which we are measuring the angle, else the degree measurement will be inaccurate. 1. How to use a protractor to draw angles?

To draw angles using a protractor, the following steps can be followed:

Refer Draw Angles with the Protractor section to know more.

You can use a 360 degree protractor by following these simple steps:

3. How do you use a protractor step by step?