Pairs of Angles
Go back to  'Angles'

Suppose that a ray OC stands on a line AB, as shown below: 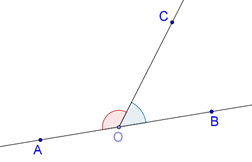 We have a pair of adjacent angles, and this pair is a linear pair, which means that the sum of the (measures of the) two angles will be 1800.  This is true in general, and we formalize it as an axiom.

Axiom: If a ray stands on a line, the sum of the pair of adjacent angles is 1800.

Will the converse of this statement be true? That is, if the sum of a pair of adjacent angles is 1800, will the non-common arms of the two angles form a line? The answer is yes, and we formalize it as an axiom as well.

Axiom: If the sum of two adjacent angles is 1800,  then the non-common arms of the angles form a line.

These two axioms can be grouped together as the Linear Pair Axiom.

Suppose that two lines AB and CD intersect at O, as shown below: 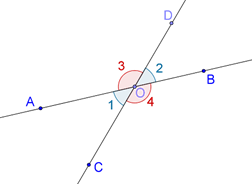 Theorem: Vertically opposite angles are equal.

Proof: Note from the figure that:

Example 1: Two lines AB and CD intersect at O, forming the angles as shown below: Example 2: If two adjacent angles form a linear pair, show that their angle bisectors are perpendicular.

Solution: Consider the following figure, in which \(\angle AOC\) and \(\angle BOC\) are adjacent angles which form a linear pair: 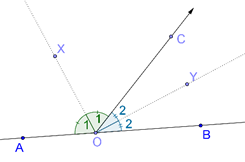 This shows that OX ⊥ OY.

Example 3: Five rays originate from a point O, as shown below: Five angles are formed, which have been marked as shown. What is the sum of these angles? 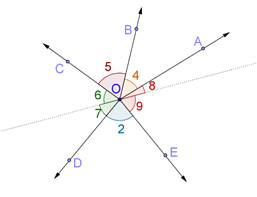 Note that this answer will be the same regardless of how many rays originate from O. This is because when you draw a line through O, all angles on one side of it sum to 1800, and so do all angles on the other side, so the combined sum is always 3600. 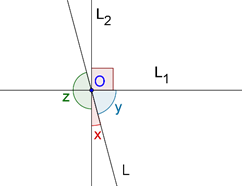