In math, numbers can be even and odd numbers, prime and composite numbers, decimals, fractions, rational and irrational numbers, natural numbers, integers, real numbers, rational numbers, irrational numbers, and whole numbers. How do you define a number? You can define a number as a count, like in a race, when we say, 3, 2, 1, GO!” or a measurement such as John Cena weighs 275 lbs. There are also fractions such as 22/7 and decimals such as 3.14. Numbers are an integral part of our everyday lives, right from the number of hours we sleep at night to the number of rounds we run around the racing track. Numbers define world records, sales, miles - you name it, and it has a number. In this chapter, we'll give you an introduction to the different types of numbers that are in math and those we use.

Numbers are the origin of mathematics and without numbers math is nothing. Number name is referred to the pattern of writing a number in words. For example 1 in words is written as one. Let us have a look at some numbers and their number names.

The above mentioned numbers are the basic numbers with the help of which we can form 2-digit, 3-digit, 4 digit, n-digit numbers. To write a larger numbers in words or vice-versa it is significant that we know the place value of those numbers.
For Indian place values, places are grouped into four periods - ones, thousands, lakhs, and crores. These four periods has nine place values which are denoted as - Ones [ones, tens, and hundreds], thousands [thousands and ten thousands], lakhs [lakhs and ten lakhs], crores [crores and ten crores]. Let us see how the numbers are represented in International as well as Indian numeration system with the help of this chart given below. 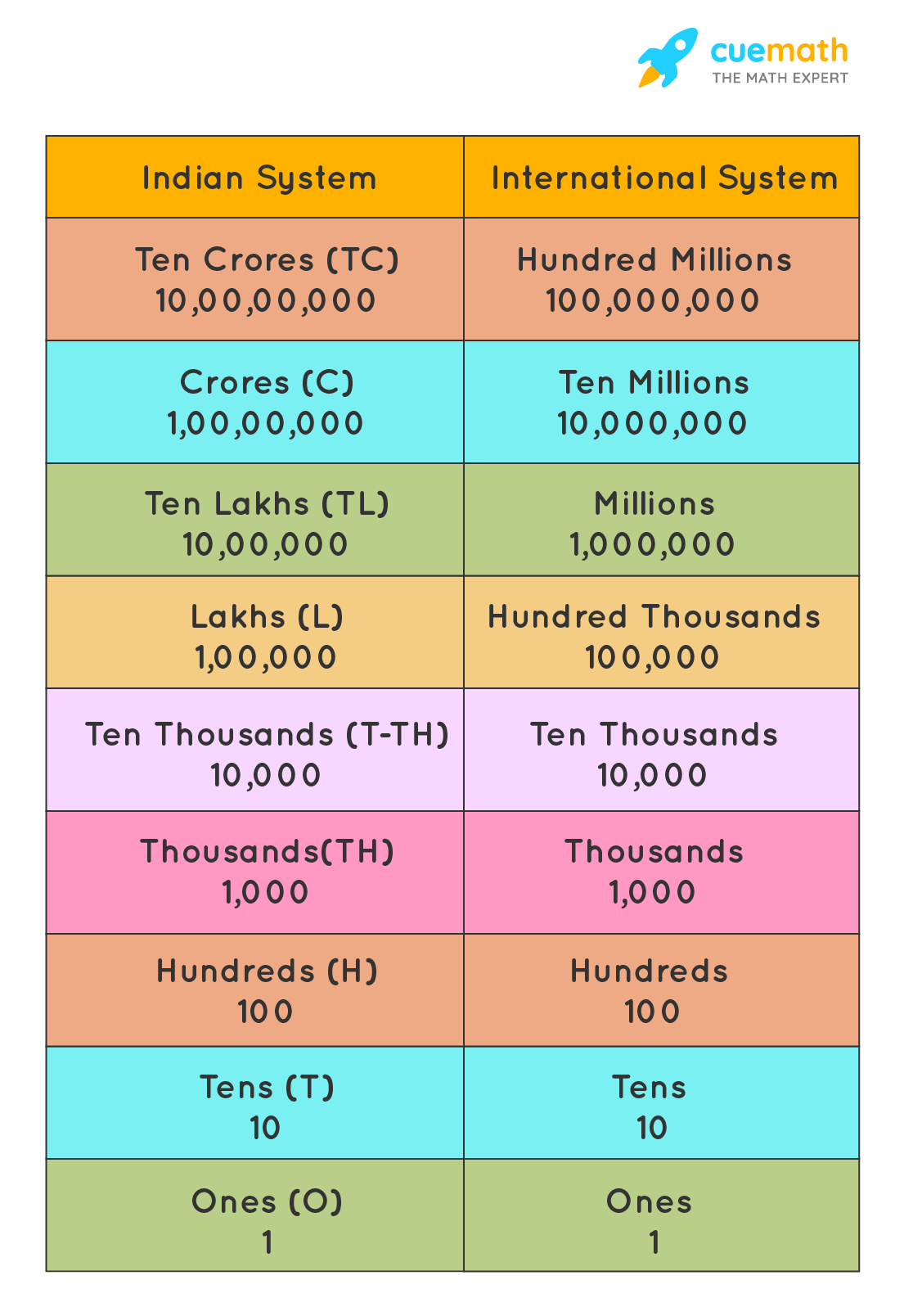 Numbers are classified in various forms. Any natural number like 1, 2, 3, etc, is termed as a cardinal number. For counting we use cardinal numbers. Similarly there is another pattern for numbers which is an ordinal number. It is a number that denotes the position of an object. For example: 1st, 2nd, 3rd etc. Mostly for ranking we use ordinal numbers. Numbers are classified into several types like we mentioned above. Let us have a look at some major and important types of numbers which we use often.These include:

All the counting numbers from 1 to infinity (countless) are called natural numbers. 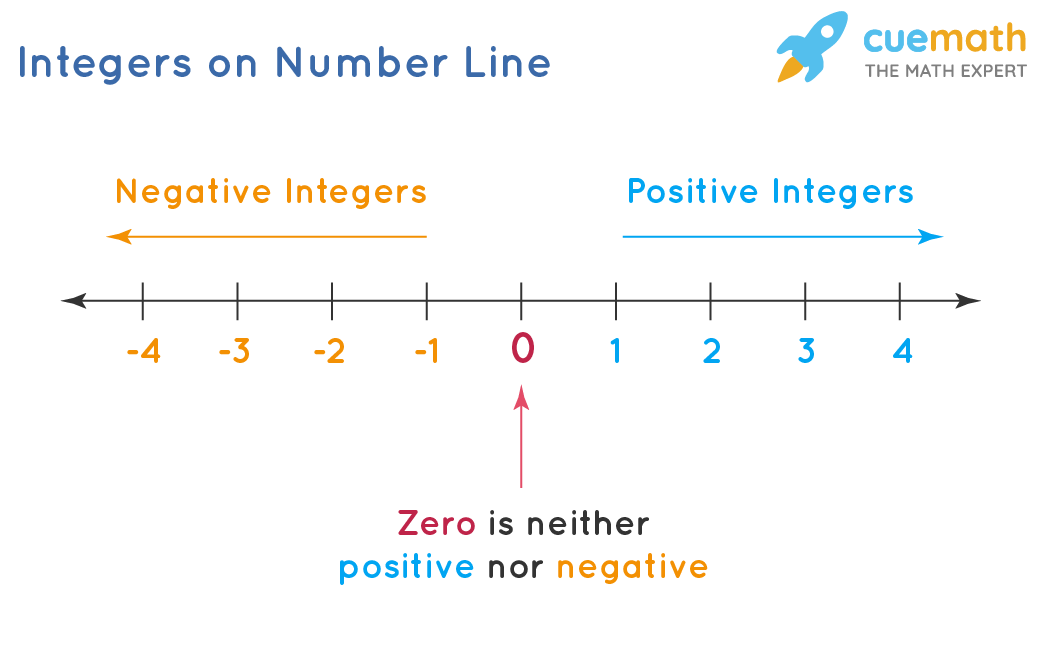 Any number which is defined in the form of a fraction or ratio is called a rational number. This may consist of the numerator (p) and denominator (q). A rational number can be a whole number or an integer. 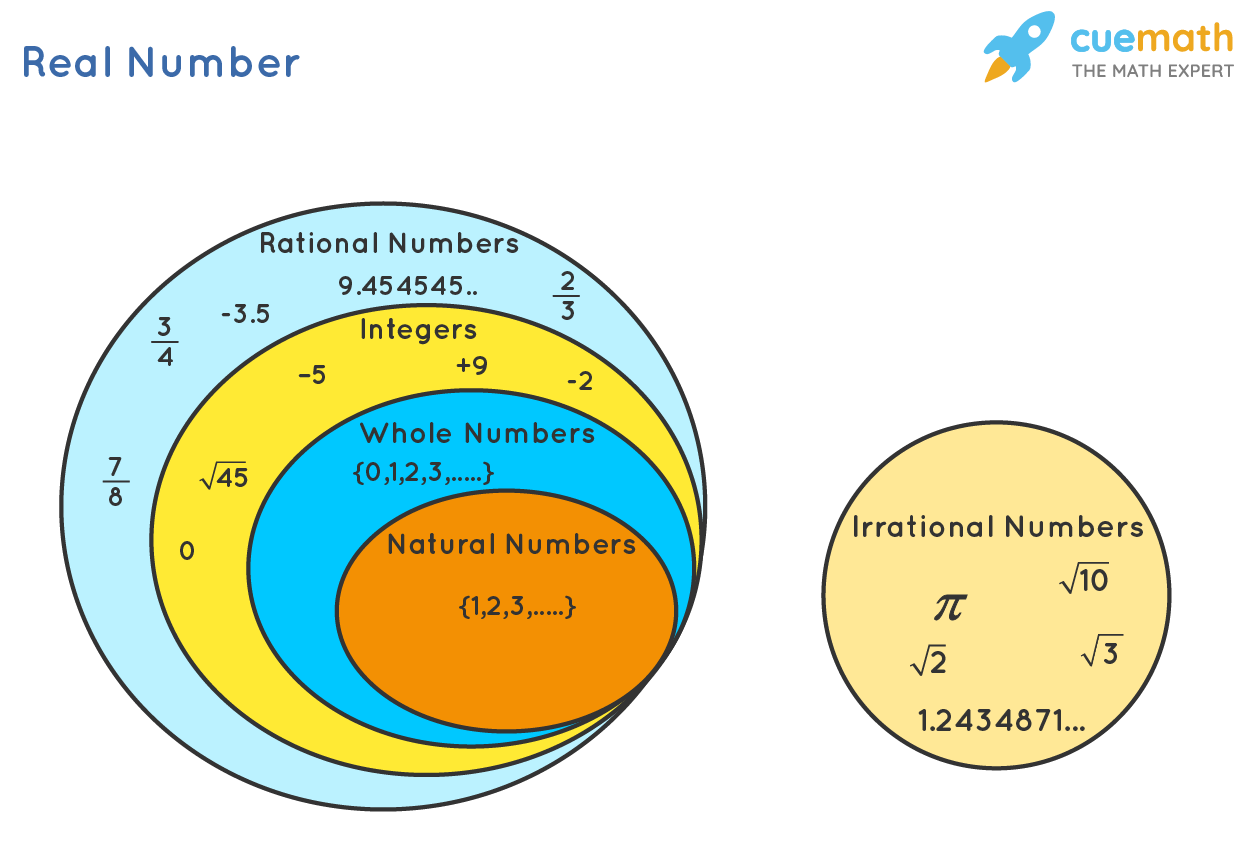 Even and Odd Numbers

A fraction is a part of a whole. The whole itself can be a number, an object, or a group of numbers (or objects). Fractions help us speak of numbers besides whole numbers. For instance, 15 and 16 are whole numbers — but a fraction is needed to write out a number that is between 15 and 16. Decimals help us like fractions do — but are separate entities. This number line shows us a few whole numbers on the number line.

Fractions and decimals both exist on the number line. In fact, every fraction has an equivalent decimal. The real difference between the two is how they are written out.

Index numbers tell you how many times you have to use the number in a multiplication. Consider the following example:

Related Articles on What Are Numbers

Solved Examples on What Are Numbers

Practice Questions on What Are Numbers

FAQs on What Are Numbers

What is the Biggest Number?

What are the Basic Numbers?

The numbers 0 to 9 are called the basic numbers.

What is not a Real Number?

What are the First 10 Numbers?

What are the First 25 Prime Numbers?

The first 25 prime numbers are:

What are Odd Numbers?