The squeeze theorem is used to evaluate a kind of limits. This is also known as the sandwich theorem. To evaluate a limit lim ₓ → ₐ f(x), we usually substitute x = a into f(x) and if that leads to an indeterminate form, then we apply some algebraic methods. But neither of them may work in evaluating some kind of limits such as lim ₓ → ∞ (sin x / x). The squeeze theorem helps in this regard.

Let us see what does squeeze theorem states, how to prove it, and how to apply it along with various examples.

What is Squeeze Theorem?

The squeeze theorem (also known as sandwich theorem) states that if a function f(x) lies between two functions g(x) and h(x) and the limits of each of g(x) and h(x) at a particular point are equal (to L), then the limit of f(x) at that point is also equal to L. This looks something like what we know already in algebra. If a ≤ b ≤ c and a = c then b is also equal to c. The squeeze theorem says that this rule applies to limits as well.

We define the squeeze theorem mathematically as follows: 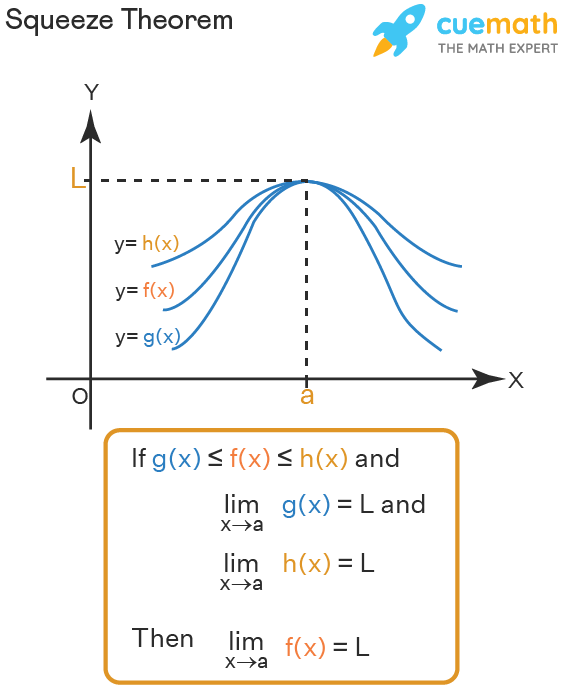 Hence the squeeze theorem is proved.

There are two limits that occur most frequently while solving the problems: lim ₓ → ₀ (sin x / x) and lim ₓ → ₀ (1 - cos x)/x. We can use the squeeze theorem to evaluate these two limits. After learning the process of evaluating these limits using the squeeze theorem, we can just memorize them so that we can use those values right away when solving other limits. We are going to prove: 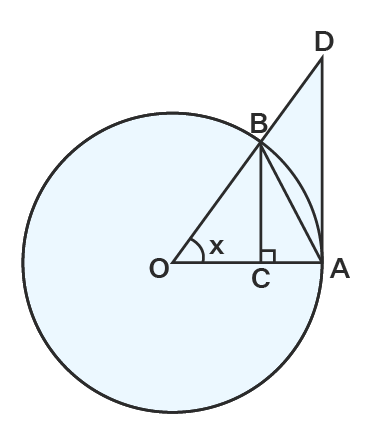 From the above figure,

Using the formulas of the area of triangle and area of the sector:

Multiplying each side by 2,

Since, it is a unit circle, its radius, OA = 1. So the above inequality becomes:

Since x lies in the first quadrant, sin x is positive. Thus, dividing throughout by sin x doesn't affect the signs of inequality.

cos x < (sin x)/x < 1. Hence we proved the inequality. We will now use this to prove the first limit.

When we have to evaluate a limit using squeeze theorem (or sandwich theorem), remember the following trig inequalities.

Why is the Name Squeeze Theorem?

What are the Other Names of Squeeze Theorem?

The squeeze theorem is also known with other names such as:

Can we Apply Sandwich Theorem for Infinite Limits?

How Do We Apply Squeeze Theorem?

What is the Name of the Mathematician Who Proposed Squeeze Theorem?

Is Squeeze Theorem Only for Trig?

In fact, the squeeze function is applicable for any type of function. But while solving the problems, we mostly come across the ones that are with trig functions when we apply the squeeze theorem.