The sine of an angle is a trigonometric function that is denoted by sin x, where x is the angle in consideration. In a right-angled triangle, the ratio of the perpendicular and the hypotenuse is called the sine function. In other words, it is the ratio of the side opposite to the angle in consideration and the hypotenuse and its value vary as the angle varies. The sine function is used to represent sound and light waves in the field of physics.

In this article, we will learn the basic properties of sin x, sine graph, its domain and range, derivative, integral, and power series expansion. The sine function is a periodic function and has a period of 2π. We will solve a few examples using the sine function for a better understanding of the concept.

The sine of an angle in a right-angled triangle is a ratio of the side opposite to an angle and the hypotenuse. The sine function is an important periodic function in trigonometry and has a period of 2π. To understand the derivation of sin x, let us consider a unit circle centered at the origin of the coordinate plane. A variable point P moves on the boundary (circumference) of this circle. Observe that P is in the first quadrant, and OP makes an acute angle of x radians with the positive x-axis. PQ is the perpendicular dropped from P onto the horizontal axis. The triangle is thus formed by joining the points O, P, and Q as shown in the figure. 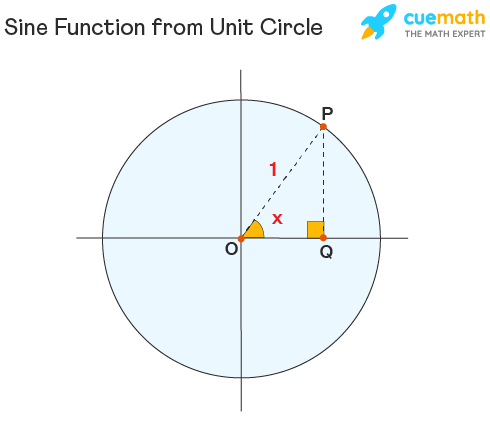 Hence, the sine function for the above case can be mathematically written as sin x = PQ/OP. Here, x is the acute angle between the hypotenuse and the base of a right-angled triangle OPQ.

Before getting to the graph of the sine function, let us understand how the values of sine vary on a unit circle and then plot them on the graph. As shown in the image above, we note that sin x = PQ/OP = PQ/1 = PQ (As the radius of a unit circle is 1, so OP = 1). As x varies, the value of sin x varies with the variation in the length of PQ. Now, we will study the variation in the sine function in the four quadrants of the coordinate plane.

Case 1: Variation of PQ in the first quadrant.

Suppose that initially, P is on the horizontal axis. Let us consider a movement of P through 90° or π/2 rad. The following figure shows different positions of P for this movement. Clearly, PQ has increased in length, from an initial value of 0 (when x is 0 radians) to a final value of 1 (when x is π/2 radians). 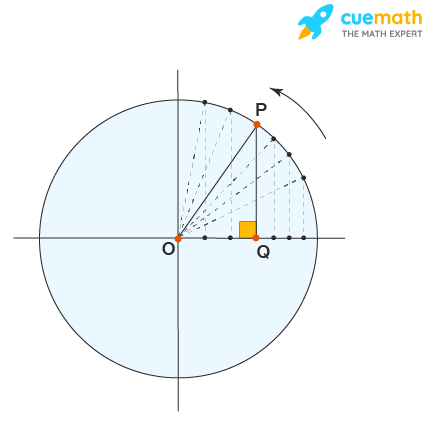 Case 2: Variation of PQ in the second quadrant.

Now, we will check the position of P in the second quadrant as we did in the first quadrant and check how the value of the sine function varies. P subsequently moves from 90° position to 180° position. In this phase of the movement, the length of PQ decreases, from a maximum of 1 at 90°, to a minimum of 0 at 180°.

Case 3: Variation of PQ in the third quadrant.

Case 4: Variation of PQ in the fourth quadrant.

Finally, when P moves from a position of 270° to a position of 360°, sin x increases from −1 to 0 (once again). Though the length or magnitude of PQ decreases but the magnitude value of PQ will increase because its direction is along the negative y-axis. Thus, the value of the sine for angle x increases.

We can now plot this variation on a graph. The horizontal axis represents the input variable x as the angle in radians, and the vertical axis represents the value of the sine function. Merging the response of variation in the value of PQ for all four quadrants, we obtained the complete plot of PQ vs x or sin x vs x, for one complete cycle of 0 radians to 2π radians (0° to 360°). The sine graph thus obtained is shown below: 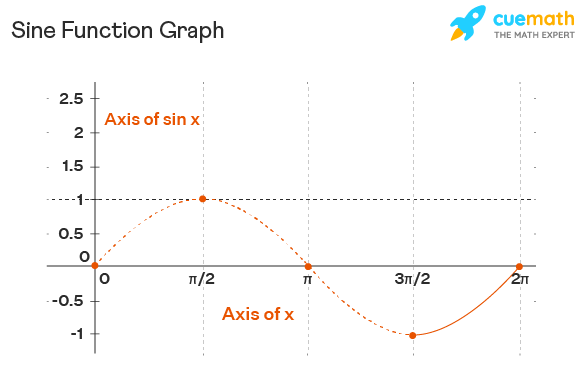 Now, let us go through the values of the sine function for some specific angles such as 0°, 30°, 45°, 60°, 90°, etc. as they are easy to remember. Most of the values given below are used for solving different problems in trigonometry. The values of sin x are listed below in the trigonometric table:

Properties of sine function depend upon the quadrant in which the angle lies. Sine is a special trigonometric function and has many properties. Some of them are listed below:

In trigonometry, there are several identities involving the sine function. These identities are very useful in solving various math problems. Some of them are listed below:

What is a Sine in Trigonometry?

How to Find the Period of Sine Function?

What is the Range of Sine Function?

How to Find the Amplitude of a Sine Function?

What is Inverse Sine?

What is Sine Function Formula?

A sine function formula is given by sin x = Opposite Side/Hypotenuse = Perpendicular/Hypotenuse. This formula helps to determine the value of the sine function sin x which can be determined using the lengths of the sides of the triangle or using the angle x.

What is the Period of Sine?

Is Sine Function Even or Odd?

What is the Value of Sine?