Limits in maths are defined as the values that a function approaches the output for the given input values. Limits play a vital role in calculus and mathematical analysis and are used to define integrals, derivatives, and continuity. It is used in the analysis process, and it always concerns the behavior of the function at a particular point. The limit of a sequence is further generalized in the concept of the limit of a topological net and related to the limit and direct limit in the theory category. Generally, the integrals are classified into two types namely, definite and indefinite integrals. For definite integrals, the upper limit and lower limits are defined properly. Whereas indefinite integrals are expressed without limits, and it will have an arbitrary constant while integrating the function. Let us discuss the definition and representation of limits of the function, with properties and examples in detail. 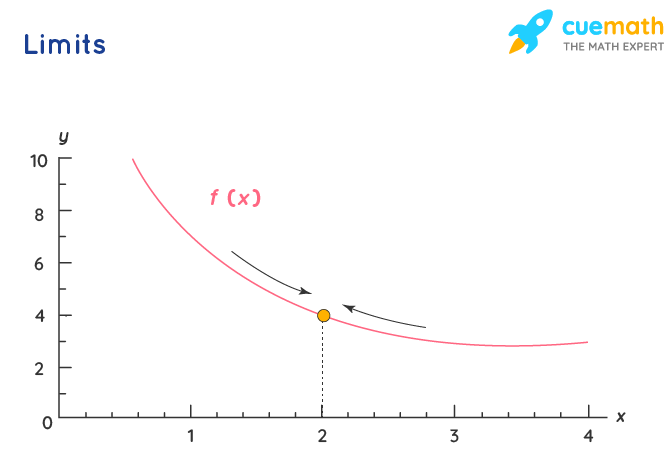 Note: The limit of the function exists between any two consecutive integers.

Limit of a Function of Two Variables

Limits of Functions and Continuity

In elementary calculus, the condition f(X) →λ as x → a means that the number f(x) can be made to lie as close as we like to the number λ as long we take the number unequal to the number a but close enough to a. Which shows that f(a) might be very far from λ and there is no need for f(a) even to be defined. The very important result we use for the derivation of function is:  f'(a) of a given function f at a number a can be thought of as,
f'(a) =\(\lim _{x \rightarrow a} \frac{f(x)-f(a)}{x-a}\)

What is the Limit Formula?

Limits formula:- Let y = f(x) as a function of x. If at a point x = a, f(x) takes indeterminate form, then we can consider the values of the function which is very near to a. If these values tend to some definite unique number as x tends to a, then that obtained a unique number is called the limit of f(x) at x = a.

What Are Limits in Calculus?

A limit tells us the value that a function approaches as that function's inputs get closer and closer(approaches) to some number. The idea of a limit is the basis of all differentials and integrals in calculus.

When Can a Limit Not Exist?

A common situation where the limit of a function does not exist is when the one-sided limits exist and are not equal: the function "jumps" at the point. The limit at x→0 does not exist.

Why Do We Use Limits in Mathematics?

Limit, a mathematical concept based on the idea of closeness, is used primarily to assign values to certain functions at points where no values are defined, in such a way as to be consistent with nearby values.

How Do You Know if a Limit Is One-Sided?

A one-sided limit is a value the function approaches as the x-values approach the limit from *one side only*. For example, f(x)=|x|/x returns -1 for negative numbers, 1 for positive numbers, and isn't defined for 0. The one-sided *right* limit of f at x=0 is 1, and the one-sided *left* limit at x=0 is -1.

How Are Calculus Limits Used in Real Life?

What Is the Limit of a Sine Function?