Similar figures mean when two figures are of the same shape but are of different sizes. In other words, two figures are called similar when they both have a lot of the same properties but still may not be identical. For example, the sun and moon might appear the same size but they are actually different in size. However, we are similar figures since both the figures are circular in nature. This phenomenon is considered as the property of similarity keeping the shape and distance in mind. Let us learn more about this interesting concept by defining similar figures, their role in geometry, and solve a few examples.

When two or more objects or figures appear the same or equal due to their shape, this property is known as a similarity or similar figures. When we magnify or demagnify these figures, they always superimpose each other. In geometry, when two shapes such as triangles, polygons, quadrilaterals, etc have the same dimension or common ratio but size or length is different, they are considered similar figures. For example, two circles (of any radii) are of the same shape but different sizes because they are similar. Look at the image below. 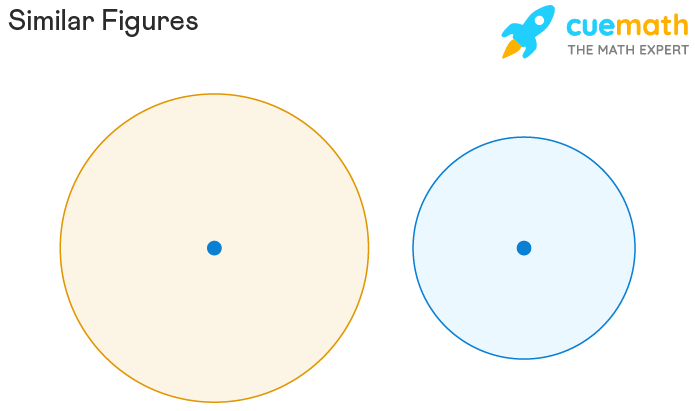 The symbol to express similar figures is the same symbol for congruence i.e. "∼" but similar does not mean the same in size. Shapes are also considered to be similar when the ratios of the corresponding sides are equivalent i.e. while dividing each set of corresponding side lengths, the number derived is the scale factor. This number helps in increasing or decreasing the figures in size but not in shape leaving them looking like similar figures. For example, a rectangle has a length of 5 units and a width of 2 units. Now, if we increase the size of this rectangle by a scale factor of 2, the sides will become 10 units and 4 units, respectively. Hence, we can use the scale factor to get the dimensions of the changed figures.

Some applications of similarity or similar figures are mentioned below.

Let us understand the similarity of triangles with the three theorems according to their angles and sides.

The AA criterion for triangle similarity states that if the three angles of one triangle are respectively equal to the three angles of the other, then the two triangles will be similar. In short, equiangular triangles are similar. Ideally, the name of this criterion should then be the AAA(Angle-Angle-Angle) criterion, but we call it as AA criterion because we need only two pairs of angles to be equal - the third pair will then automatically be equal by the angle sum property of triangles.

Consider the following figure, in which ΔABC and ΔDEF are equi-angular,i.e.,

Using the AA criterion, we can say that these triangles are similar. 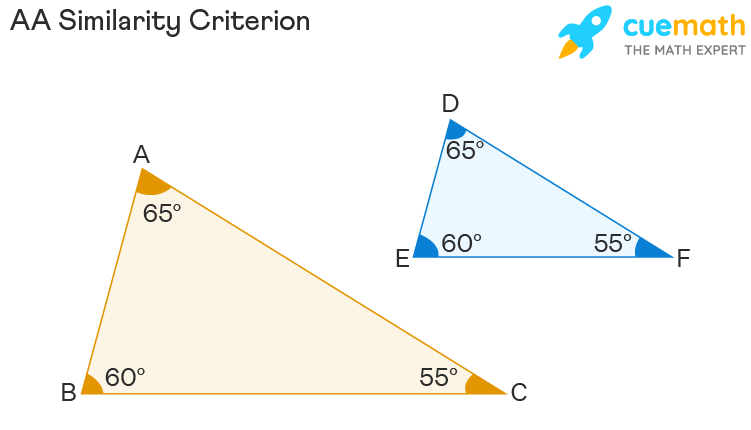 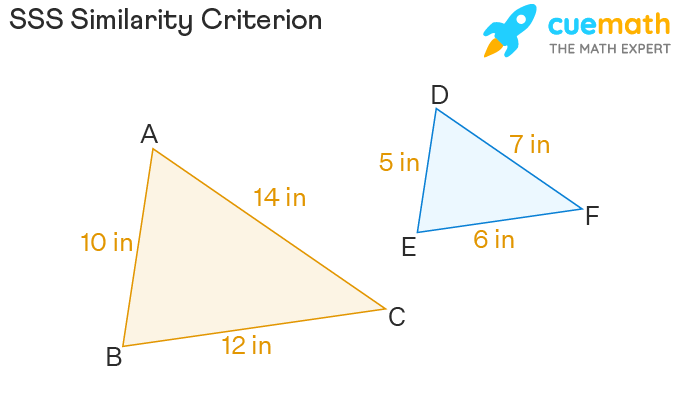 That is, it is given that:

The SAS similarity criterion states that If two sides of one triangle are respectively proportional to two corresponding sides of another, and if the included angles are equal, then the two triangles are similar. Note the emphasis on the word included. If the equal angle is a non-included angle, then the two triangles may not be similar. Consider the following figure: 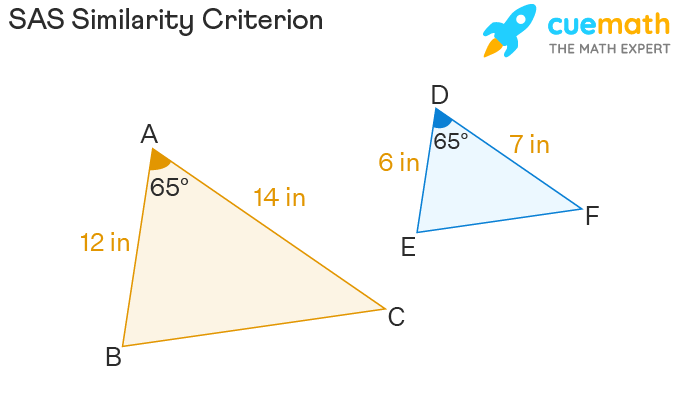 It is given that

The SAS criterion tells us that ΔABC ~ ΔDEF

Difference Between Similarity and Congruence

The words similarity and congruence are associated with shape and size in geometry. Congruence means the same structure, size, and shape whereas similar figures mean the same shape but different size. Let us look at the difference between both terms.

Listed below are a few topics related to similar figures, take a look.

How is Similarity Used in Real Life?

The similarity is used in designing, solving problems involving height and distance, etc.

What are the Rules of Similarity?

Is SSA a Similarity Theorem?

No, SSA is not a similarity theorem.

What is a Similarity Statement?

When two or more objects or figures appear the same or equal due to their shape, this property is known as a similarity.

What is a SSS Similarity Theorem?

What is a SAS Similarity Theorem?

What is a AA Similarity Theorem?

What are Similar Polygons?