What is System of Measurement?

Measurement systems are a collection of units of measurement and rules relating them to each other. The word “measurement” is derived from the Greek word "metron," which means a limited proportion. This word also finds its roots in the words "moon" and "month", possibly because astronomical objects were among the first methods to measure time. In the old days, we used body parts for informal measurement systems like foot length, cubit, handspan, etc. which were not so accurate and vary from person to person. 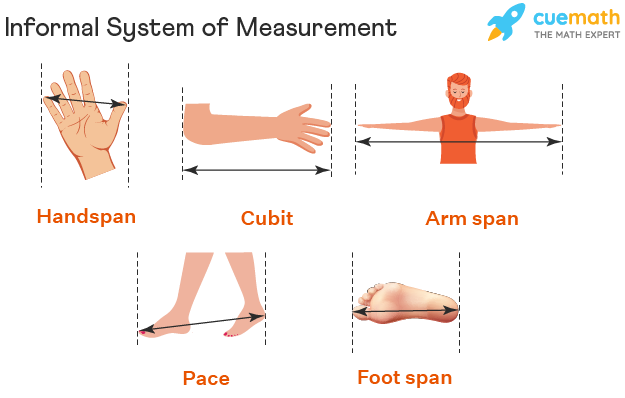 So, there was a need to regularize the measurements. A system of measurement like the International System of Units called the SI units ( the modern form of the metric system), Imperial system, and US customary units were standardized across the world.

Introduction to Metric System of Measurement

Metric System: The units of the metric system, originally taken from observable features of nature (basically what we normally measure like the time, length, mass, etc. are defined by seven physical constants with numerical values in terms of the units. Metrics systems evolved and over time are universally accepted as the International System of Units called the SI System. Many countries follow this system.

US Standard Units: United States, Liberia, and Myanmar have not adopted the metric system as their official system of weights and measures. U.S. customary units are used across the states for measurements.

Meter: Length is measured in meters. The unit is denoted by the alphabet (m). Look at the chart below. The base unit is "m" and we add "Deca," "Hecto," and "Kilo" to measure large units by successively multiplying by 10 and "deci," "centi," and "millie" successively dividing by 10, to measure smaller length. We can use a simple ruler to measure length. For example, a pencil measured on a ruler would be 10 cm long. 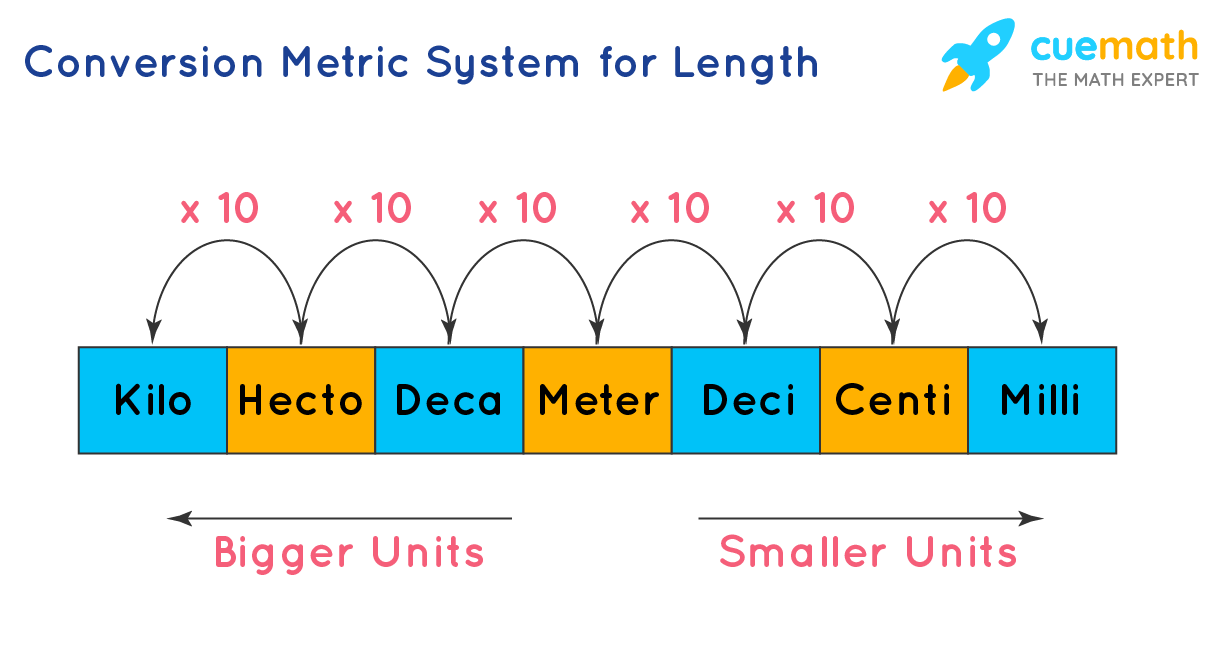 Kilogram: Mass is measured in kilograms and the unit is denoted by (kg). It tells us how heavy or how light an object is. We can multiply and divide the base units to measure smaller and bigger units. In general, for our convenience, we use gram, kilogram, and milligram. Other units are hardly used. We use a weighing scale to measure how heavy things are. A weighing scale is used in supermarkets to weigh groceries. A doctor also used a weighing scale to find the weight of a person. 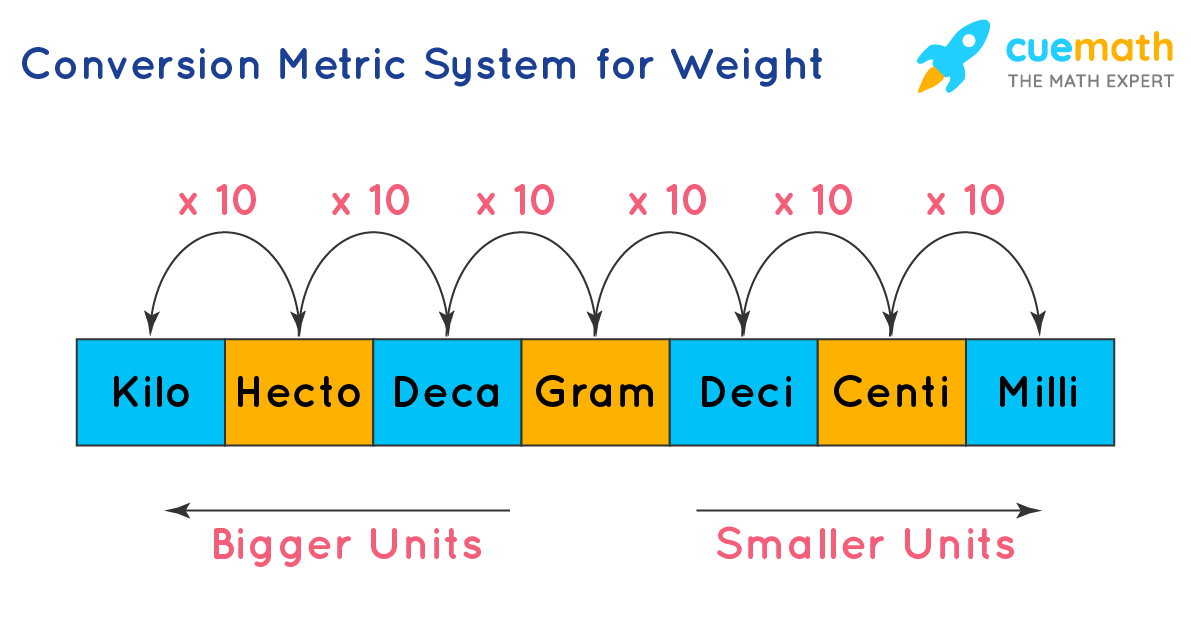 Second: Time is measured in seconds. The representation of seconds is (s). Time is the ongoing sequence of events taking place. It is used to quantify the duration of the events. It also helps us to set the start time or the end time of events. The base unit for time is seconds. Some of the conversion units of time are, 1 minute = 60 seconds, 1 hour = 60 minutes, 1 day = 24 hours, 1 week = 7 days, 1 year = 12 months, or 1 year = 365 days. We use a clock or watch to tell the current time. A stopwatch can be used to measure the time in seconds.

Other Metric System of Measurements

Though we are aware of the basic defined metric systems for length, mass, volume, but there are numerous other quantities in the physical world, for which we need to define the base unit. Quantities like, force, power, area, magnetic intensity, have their own individual units, which have been derived from the basic 7 quantities of the metric system of measurement. Such quantities of the basic system are sometimes not sufficient to overcome the challenges of studying and measuring other higher quantities existing in physics. Here we shall look at some of the other important physical quantities and their units.

Volume: Volume is the space enclosed or occupied by any three-dimensional object or solid shape. It has length, width, and height. It is measured in cubic units like cm3, m3, etc. and liquid volume is measured in liters. Let us look at a simple example. The initial volume of water in the container is 20 units. The volume of water when the object is placed inside the container 30 is units. Therefore, the Volume of the object is the difference between the two volumes, that is, 30-20 = 10 units. Finding the Volume of an object can help us determine the amount required to fill that object, for example, the amount of water in a bottle. Now, let's learn how to find the Volume of a Cuboid, Volume of a Cylinder, Volume of a Cone, Volume of a Sphere.

Time: Time is the ongoing sequence of events taking place. It is used to quantify the duration of the events. It also helps us set the start time or the end time of events. One of the very first experiences we have with mathematics is learning how to measure time. You may already know that the measurement of time is done using a watch and a calendar. Now, let's learn how to read and represent time along with how to read a calendar.

Speed: Speed is the change in position of the object with respect to time. It is the ratio of distance traveled by the object to the time taken to travel that distance. The SI unit of speed is m/s. It is also expressed in km/hr or miles/hr. In vehicles, we have a speedometer that records the speed at which the vehicle is traveling.

Acceleration: Acceleration is the rate of change of velocity with respect to time. It is a vector quantity. It has magnitude and direction. It is measured in meters per second2 (m\s2 ), and the dimension is LT-2.

Force: Force is a push or a pull. When two objects interact with each other, the object changes its position based on the force acting on it. You apply force to move an object from its place and you also apply force to stop a moving object. The SI unit of force is Newton named after the scientist named Newton. It is basically kgm/s2 (kilogram - meter per second2), and the dimension is LMT-2.

SI Units: The international system of units called the SI units is derived from the metrics system. The basic 7 measurable quantities are standardized, and they use the units listed below in the table. There are the basic 7 units of measurement, and the rest other units are derived from here like the area, volume, force, acceleration, etc we just discussed above. Please find below the seven different quantities and their units of measurements.

US Standard System of Measurements

Just like the metrics system, the US follows the imperial system of units, also called the U.S customary units. Here things are measured in feet, inches, pounds, ounces, etc. Let us explore them in detail in the following sections.

Area: An area is a two-dimensional unit. It is the amount of space occupied by the object. We use inches, feet, yards, miles to measure the length and thus area too. The area is measured in square units such as square inch, square foot, square yard, square mile, acre. A small area is measured in a square inch and larger surfaces are measured in square yards. Land area is usually measured in acres. Let us look at a few examples of areas. A chessboard is 100sq inches, a garage is 200 sq ft, a part is 100 sq yards, a botanical garden is 500 sq miles, a football ground is exactly 1 acre (1 acre = 43,560 feet.)

Volume: Volume is a three-dimensional quantity. It is the amount of capacity/space a substance contains, or the space it can hold. The most common measures of volume in the US customary units are fluid ounces (fl. oz), cups, pints, quarts, and gallons. Note that an ounce is the measure of mass and a fluid ounce is a measure of volume. A fluid ounce is the size of a medicine cup. Other units like peck (1 peck = 2 gals), barrel (31.5 gals) are hardly used. Let us look at the conversion from one unit to another. 1 cup = 8 fl oz. 1 pint = 2 cups. 1 quart = 2 pints, 1 gallon = 4 quarts.

Time and Date: Time is measured in seconds. We use a clock (digital or analog) to tell the current time. There are 12-hr clock and 24-hour clock formats as well. Further, let us learn more about measuring time, reading and representing time, and how to read a calendar. In the US, the format for writing the date is "month–day–year". For example 7/4/2000 means the 7th month - July, 4 - Date, and the year 2000. It is the Millenium year Independence Day, July 4th!

Temperature: Temperature is the measure of how hot or cold substances are. We use a thermometer to measure the temperature. The temperature is measured in degrees Celsius (°C) or Fahrenheit (°F). 0 degrees celsius is equal to 32 degrees Fahrenheit. To convert Celsius to Fahrenheit, you can use the formula Fahrenheit = 9/5 × Celcius + 32

Speed: Speed is the total distance covered by an object in a given time. It is the ratio of distance covered to the time traveled. In British and US customary units, speed is measured in miles per hour (mph). The speedometer is an instrument that gives the current speed at which the vehicle is traveling. You might have seen it in your car.

Direction: The four cardinal directions are North, South, East, and West. A magnetic compass tells the direction. The diagonal directions include the North-East, North-West, South-East, and South-West. A compass is generally used for navigation and is used in seas, deserts, where it is difficult to find the direction.

Conversions from One System of Measurement to Another

Please find below the different units of conversion of mass from US standard measurement to the metric measurement system.

The following table shows the different units of conversion of the volume from US standard measurement to the metric measurement system.

Please find below the different units of conversion of the area from US standard measurement to the metric measurement system.

Practice Questions on System of Measurements

FAQs on System of Measurement

Why Systems of Measurements Are Used in the Metric System?

Measurement is important in our day-to-day life to get the right amount of quantity we require. Exact measurement helps in taking correct decisions. The basic units of measures of the metric system are length (measured in meter) mass (measured in kilogram) and time (measured in seconds). Meter, kilogram, and seconds are the base units, kilo-, hecto-, deka-, deci-, centi-, and milli- are prefixed with a base unit to measure larger or smaller quantities.

What Are the 7 Basic Units of Measurement?

The basic 7 units of measurement are listed below, the rest of the measures are derived from the base units.

What Are the 3 Systems of Measurements?

What Is the Main System of Measurement?

How To Read the Metric System of Measurement?

What Is the Customary System of Measurement Based on?

How Does the System of Measurement Work?