The metric system was introduced in France in the year 1790. This historical evolution has culminated in the invention of the international system of units (SI units) later. It is known as "Metrication”. The different unit of measurement resulted in the introduction of the "Metric System".

Metric Conversions are a part of our daily life, from cooking, baking to what not. Check out the metric conversion charts and tables in this lesson to get a better idea of how you can perform metric conversions.

What is Metric Conversion?

Everything around us right from the amount of sugar you add to a cake to the dimensions of any field has a value of the measurement. We measure each object according to its length, weight, volume, or time. While the distance of a road can be measured in miles, we can't do the same for the amount of water in a can. We use gallons to find the volume of water and feet to find the height of the can.

Metric Conversion refers to the conversion of the given units to desired units for any quantity to be measured. The different unit of measurement resulted in the introduction of the "Metric System". The metric units followed in the United States are called United States Customary Units (USCS).

The metric system of measurement in mathematics is the set of standard units defined to measure length, weight, and capacity. The units of the metric system, originally taken from observable features of nature, are defined by seven physical constants with numerical values in terms of the units. The Metric system evolved and over time is universally accepted as the International System of Units called the SI System and many countries follow this system. 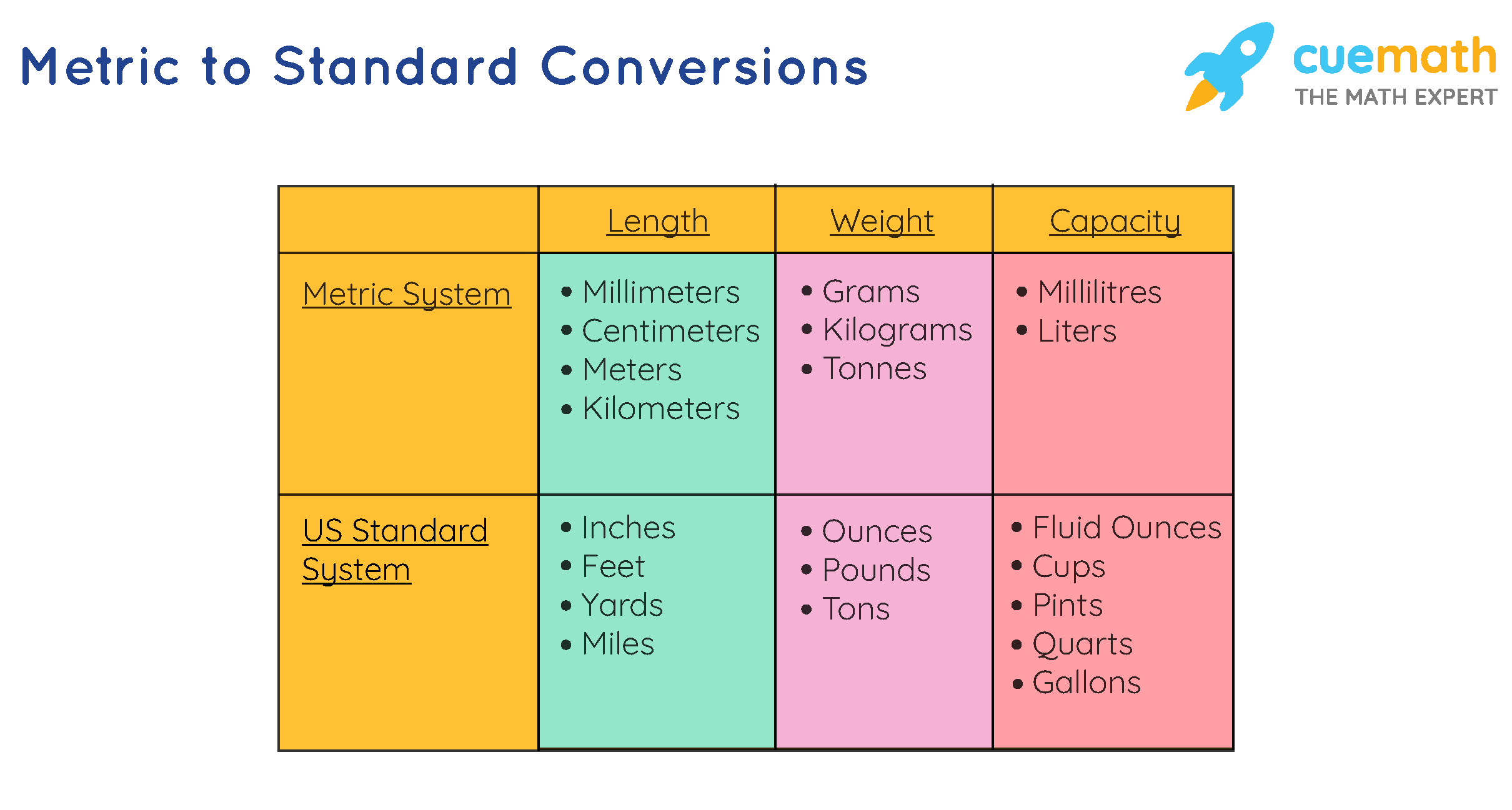 How to teach Metric Conversion?

Teaching metric conversions require translating a mathematical idea from one form to another. One can take up real-time examples, such as comparing and converting a given measurement to another unit within the same measurement system. Metric conversion charts can be a good idea.

The length/distance conversion chart gives the basic unit conversions related to length in a simple and easy form. Mile is the largest unit and inch is the smallest unit of measuring length. Let' have a look at the chart given below:

As per the standard units, the length is measured in meters. The unit is denoted by the alphabet (m).

The area Conversion chart gives the basic unit conversions related to the area. The area is the space occupied by a two-dimensional shape or figure. The area is measured in square units. Let's have a look at the chart given below:

The volume conversion chart gives the basic unit conversions related to volume. The term capacity or volume is used for measuring the space occupied by the object. Volume is the space enclosed or occupied by any three-dimensional object or solid shape. It has length, width, and height. It is measured in cubic units. Finding the volume of an object can help us determine the amount required to fill that object. For example, the amount of water in a bottle. Let's have a look at the chart given below:

The weight Conversion chart gives the basic unit conversions related to the weight. The unit weight is used for measuring the mass of an object. It tells us how heavy and how light is the object. We can multiply and divide the base units to measure smaller and bigger units.

What is the Difference Between Metric System and English System?

What's the Difference Between Imperial and Metric?

The metric system includes measuring units of meters and grams. The imperial system is used where things are measured in feet, inches, and pounds.

What are the Basic Metric Conversions?

The basic metric conversion units are meters (for length), grams (for mass or weight), and liters (for volume).

What are the 7 Basic Units of Measurement in the Metric System?

The seven basic units of measurement in the SI system are the meter (m), the kilogram (kg), the second (s), the kelvin (K), the ampere (A), the mole (mol), and the candela (cd).

How do you Set up a Conversion Equation?

To set up a conversion equation:

What are the Conversion Factors?

How to Memorize Metric Conversion Tables?

What is the Conversion Factor for Nanometers to Meters?

Nanometers and meters are based on units of 10 and converting between units are really about moving the decimal. Since 1,000,000,000 nm equals 1 m, so in order to convert from nanometers to meters, simply move the decimal point to the left nine places.