A complete angle is a type of angle that measures 360°. An angle is formed when two lines intersect at a point and the measure of the opening between these two lines. There are different types of angles such as a right angle, acute angle, obtuse angle, and so on. A complete angle deals with one full rotation measuring 360°. Let us learn more about this interesting concept of complete angles and solve a few examples.

If after one whole rotation, the final ray coincides with the incident or initial ray, then the angle so formed is known as the complete angle. The other names are a full angle and a round angle. The angle is equal to 2π radians = 360 degrees corresponding to the central angle of an entire circle. Four right angles or two straight angles make a complete angle. The angle is similar to a zero angle but the difference is the amount of rotation. 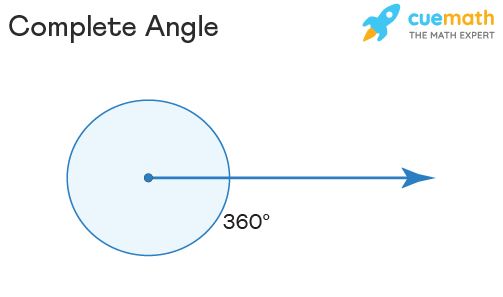 A complete angle can be represented in three different angle measuring systems, they are:

A complete angle can be formed in two ways, they are:

Complete Angle by a Line

Consider a ray AD that is placed at a plane. When the ray AD is rotated to an angle of 360° to reach the same position, another ray AC is created. The angle made by the ray to reach its final position from its initial position is ∠CAD and the amount of rotation required is 360°. Therefore, ∠CAD = 360° and is a complete angle.

Listed below are a few interesting topics related to complete angles, take a look.

What is a Complete Angle?

When an angle completes its full rotation starting from 0 degrees and ends at 360 degrees it is known as a complete angle, Its measurement is equal to 360 degrees.

What are the 6 Types of Angles?

What is the Full or Complete Angle?

An angle that completes a full rotation i.e. 1 complete turn with starting and ending at the same point is called a complete or full angle. The degree of a complete angle is 360° or 2π.

How Does a Complete Angle Look?

A complete angle covers the entire rotation starting and ending at the same point. It is a full circle with a rotation of 360°.

What is the Difference Between Complete Angle and Reflex Angle?

How Do You Make a Complete Angle?