The history of Ada Lovelace that you may not know?

Augusta Ada King, Countess of Lovelace was a famous English mathematician and considered to be the first woman to write the world's first algorithm (computer program ) for Charles Babbage (father of the computer ) "Analytical Engine" to calculate "Bernoulli's number". She is known as "Enchantress of Number " and "Lady fairy ".

The history of Ada Lovelace that you may not know?-PDF

Learn about the life of Ada Lovelace, her education, her work, her notable contributions to mathematics, computers, her achievements, and honors. Here is a downloadable PDF to explore more. ★ Ada Lovelace's teacher introduced her to Charles Babbage(father of the computer) in 1833, their friendship grew strong with time. Later she became interested in his work " Difference Engine". ★ Charles Babbage delivered a lecture on his invention "Analytical Engine" at 'University of Turin' in the year 1840. A Luigi Menabrea, an Italian writer, wrote his above lecture in French, which was printed two years later in 'Bibliotheque universelle de Genève'

★ Ada Lovelace translated his lecture to English as requested by Charles Whetstone. In the year 1842-43, Lovelace added points of her own analysis to the above-transcribed paper. The points she added are as follow:

a)  She claimed Babbage's " Analytical Engine" is more advanced than other calculating machines, and it can perform a plethora of operations other than numerical calculations.

b)  She wrote an algorithm to calculate Bernoulli's number for Babbage's "Analytical Engine ". It is Known to be the world's first ever algorithm in computer programming. 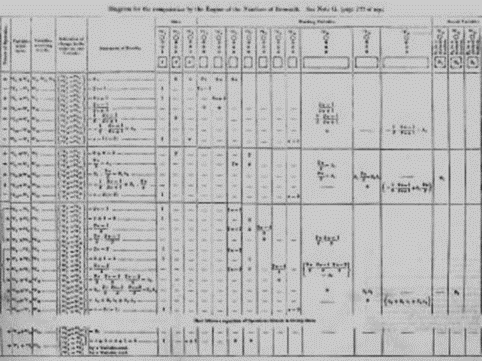 c) She also wrote about the drawbacks of "Analytical Engine", now considered the predecessor of debugging.

★ Apart from being a mathematician, she was also interested in Phrenology (study of measurement of bumps on the human skull) and animal magnetism.

★ She reviewed a research paper written by Baron Karl Von Reichenbach on "Animal Magnetism " in 1844, but it never got published.

★ She designed a model that could decode the neurological process involved in evolution of feelings using mathematics. She called it "Calculus of the nervous system " but unfortunately, it was not successful.

She is the first person to write the first algorithm program for Charles Babbage's Analytical Engine to calculate Bernoulli's number. Every year, the second Tuesday of October, is celebrated as Ada lovelace day in her honor. It is an international celebration of women’s achievements in the Science, Technology, Engineering, and math(STEM) field. Ada Lovelace died at a very young age of 37 on November 27, 1852, due to uterine cancer. As per her request she was laid to rest next to her father's grave in Nottingham's 'Church of St Mary Magdalene '.

Here are some of Ada Lovelace’s quotes:

Ada Lovelace being brought up in a very strict and religious environment never let her dreams to fade. She wrote the world's first algorithm to calculate "Bernoulli's number" and had a very good work relationship with many famous scientists and mathematicians. Ada also reviewed many of their journal papers and works. She is an inspiration for women in STEM. Ada lovelace day is celebrated as a recognition of her achievements.

What is Ada Lovelace famous for?

Being an exceptional mathematician, Ada Lovelace was the first woman programmer to write the world's first algorithm to Charles Babbage Analytical Engine. Charles Babbage called her as "The Enchantress of Numbers '' and "Lady fairy". Ada Programming Language is also named after her.

Is Ada faster than C ?

Ada programming language gives semantics that the compiler can easily optimize, so it is faster than C and C++ programs, which are manually written.

What did Ada Lovelace say to her husband on her deathbed?

Ada Lovelace confessed being disloyal to her husband at the time of her death.

She died at a very young age of 37 due to Uterine cancer. But her contribution to technology and mathematics is always alive.

What is Ada Lovelace Day?

Answer : To celebrate the achievements of women in the stream of Science, Technology, Engineering, and Mathematics (STEM ), every year, the second Tuesday of October is celebrated as Ada Lovelace Day.