Sizes and shapes are the backbones of geometry. One of the most encountered shapes in geometry is polygons. The Greek word ‘Polygon’ consists of Poly meaning ‘many’ and gon meaning ‘angle.’ 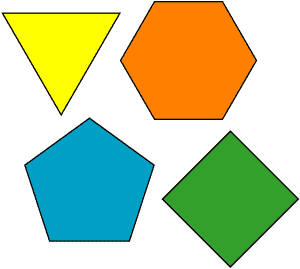 Polygons are two-dimensional shapes composed of straight lines. They are said to have a ‘closed shape’ as all the lines are connected. In this article, we will discuss the concept of similarity in Polygons.

First, let us get clear with what ‘similar’ means. Two things are called similar when they both have a lot of the same properties but still may not be identical. The same can be said about polygons.

As you might have studied, Congruent shapes are the shapes that are an exact match. Congruent polygons have the same size, and they are a perfect match as all corresponding parts are congruent or equal.

There are two crucial properties of similar polygons: The above image shows two similar polygons(triangles), ABC, and A’B’C’. We can see that corresponding angles are equal.

The corresponding sides have the same ratios.

Are all squares similar? Hence, all squares are similar squares.

Are all rhombuses similar?

In a Rhombus, all the sides are equal. So, just like squares, rhombuses satisfy the condition of the ratio of corresponding sides being equal.

In a Rhombus, the opposite sides are parallel, and hence the opposite angles are equal. But the value of those angles can be anything. So, it can very much happen that two rhombuses have different angles. Hence, all rhombuses are not similar.

Two rectangles are similar when the corresponding adjacent sides have the same ratio. We do not need to check the angles as all angles in a rectangle are 90 degrees.

In the above image, the ratios of the adjacent side are . Hence, these are similar rectangles.

Are all rectangles similar?

No, all rectangles are not similar rectangles. The ratio of the corresponding adjacent sides may be different. For example, let’s take a 1 by 2 rectangle and take another rectangle with dimensions 1 by 4. Here the ratios will not be equal.

Similarity and congruency are some important concepts of geometry. A solid understanding of these topics helps in building a good foundation in geometry. This article discussed the concepts of similarity in polygons looking at some specific cases of similar quadrilaterals like similar squares, similar rectangles, and similar rhombuses.

What are similar polygons?

If two rectangles have the same perimeter, are they congruent?

Are all regular hexagons similar?

A regular hexagon is one with all equal sides, and since it is made of 6 equilateral triangles, all regular hexagons would be similar with equal angles but different sides measurements.