What is Addition Table? 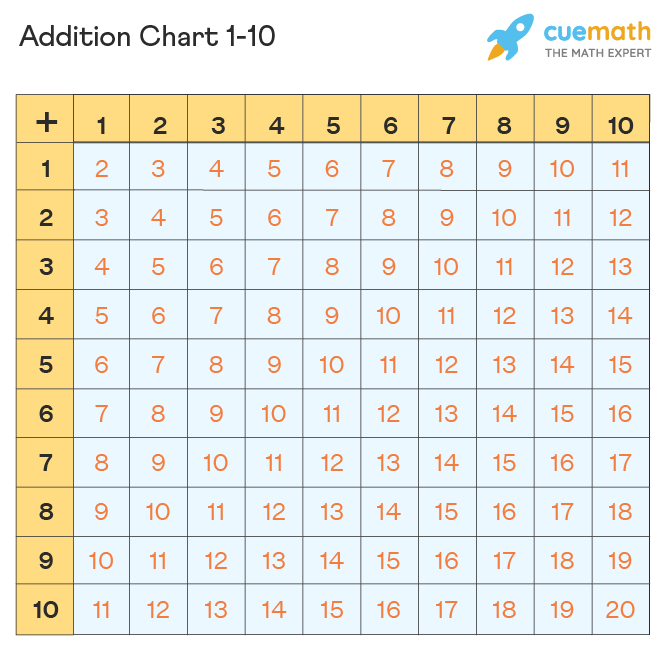 To fill a particular row of an addition table, we choose the first addend from the set of numbers written in the left-most column and keep changing the second addend vertically written in the top-most row. Each time we change a row, the corresponding addend value also changes and this process continues for all the 10 rows starting from 1 to 10. We will take a few examples to understand the addition chart.

Thus, we see that we can easily calculate the sum of two numbers by just observing the intersection of corresponding rows and columns of the two addends. Below the individual addition tables are shown for all the numbers 1 - 10 based on which the rows of the addition table chart are filled.

Check the following articles related to the addition table.

What is Addition Table?

An addition table is a tabular representation of numbers arranged in rows and columns that helps us to calculate the sum of two numbers just by observation without performing the actual calculation.

How does an Addition Table Work?

The addition table works by the arrangement of the same set of numbers in the topmost row and the leftmost column. Each time a particular addend is fixed in the row and the other addend is varied throughout the columns to perform the addition and write the result. For example, to fill in the second row, we keep the number 2 fixed and keep changing the second addend such as 2 + 1 = 3, 2 + 2 = 4 , 2 + 3 = 5 and so on. For reading the results, the intersection of the two addends is seen down the row and across the column to determine the result. For example, to calculate 9 + 3 we go down the row till number 9 and across the column till number 3. The intersection point of these will give the result in the table as 12.

How to Write Addition Table?

How to Read Addition Table?

How do you Complete an Addition Table?

An addition table is completed by first placing the same set of numbers on the topmost row and the left-most column and the entries are made by fixing the addend according to the row being filled and the other addend is changed each time to get the values. To fill row 5 (excluding the topmost row) we will fix one of the addends as 5 and keep changing the other addend as follows, 5 + 1, 5 + 2, 5 + 3, and so on... Thus, the row 5 entries will be 6, 7, 8...

What is an Addition Chart?

An addition chart is a representation of the set of numbers arranged in a specific fashion such that it helps us to apply a pattern to get the result by just observation without performing the actual calculation. It is also known as the addition table.