The word ratio means the quantitative relationship of two amounts or numbers. The concept of ratio, proportion, and variation is very important in math and in day-to-day life. The ratio is written in two ways - as a fraction and using a colon. For example - 2:3 or 2/3. Comparison of ratios is used when 3 or more quantities are required for comparison. Suppose a ratio is mentioned between friends J and K on the marks scored and another relationship between K and S, by comparing both the ratios we can determine the ratios of all three friends J, K and S. To compare ratios, we need to remember two steps. Let us see what they are.

How to Compare Ratios?

There are two steps to be remembered while comparing ratios. They are as follows:

Step 2: Compare the 1st numbers i.e. the antecedent of both the ratios with each other. Once step 1 is done, then we move forward to step 2 to find out the comparison between the two ratios.

For example, compare the ratios of the given quantities 2:6 and 5:4. Which of the ratios is greater?

Comparison of ratios can be done in two different and simple methods. Let us see both the methods below:

This method involves the 2 steps where we first find the LCM of the consequent, divide it by the consequents, and then multiply the quotient obtained with the ratios. 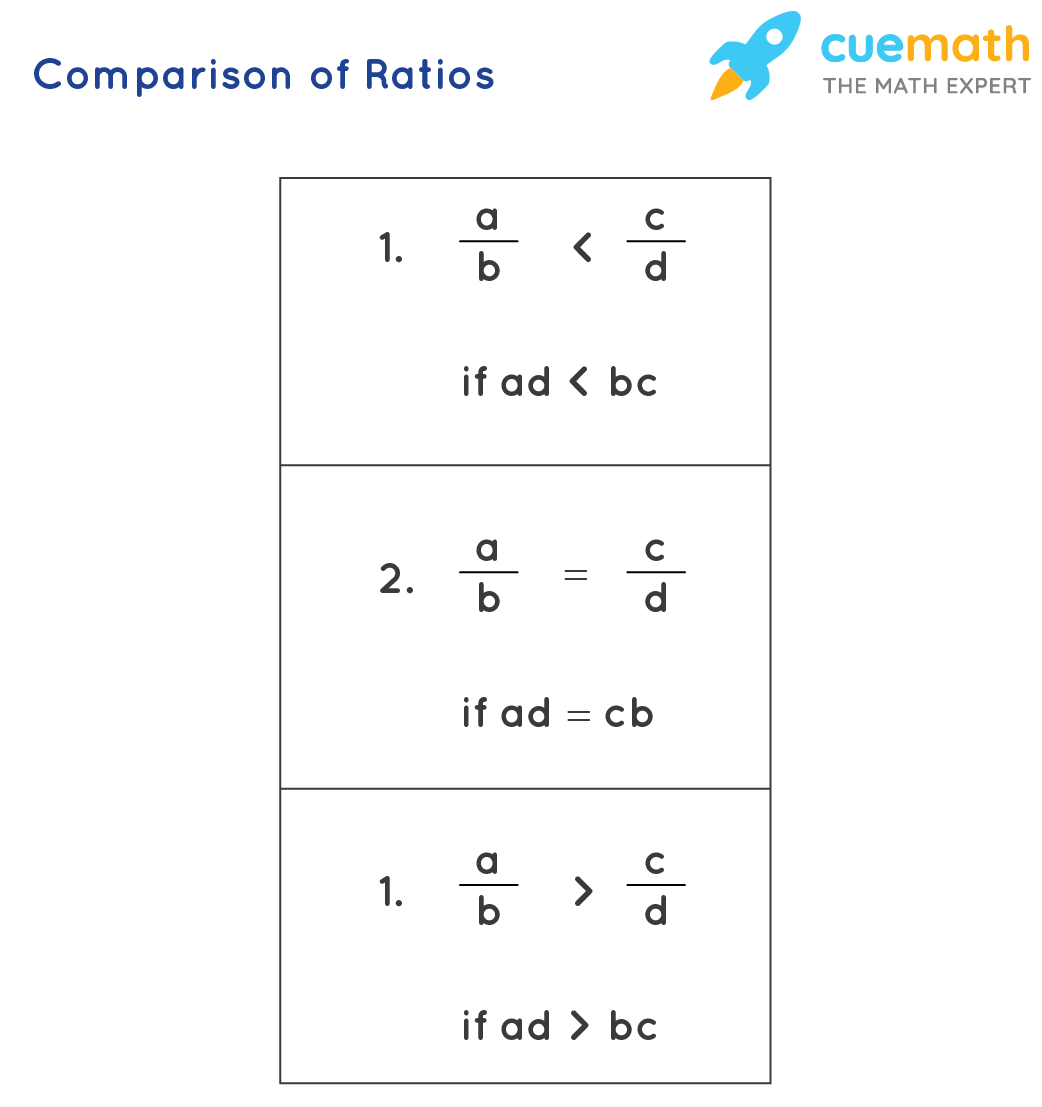 Check out these interesting articles to know more about the comparison of ratios and their related topics.

FAQs on Comparison of Ratios

What does a Comparison of Ratio Mean?

How are Two Ratios Compared?

What are the Two Methods of Comparing Ratios?

There are two methods for comparing ratios and those are:

LCM Method of Comparing Ratios: This method involves the 2 steps where we first find the LCM of the 2nd numbers, divide it by the consequents, and then multiply it with the antecedents of the ratios.

What is the Importance of Comparison of Ratios?

A ratio tells us the value of one quantity for a given value of the other quantity, this is the main importance of comparison of ratios. Through comparison, we can find out which ratio is greater or lesser among the given ratios.

When do we Use Comparison of Ratios?

How can Comparison of Ratios occur?

Once the question is given, identify the known ratio according to the facts mentioned. Once both the ratios are ready, use the cross multiplication method and solve the ratios to find out which ratio is greater than the other.

Since one ratio is greater than the other. Therefore, the two meals do not have the same ratio.