What is Formula For Work? 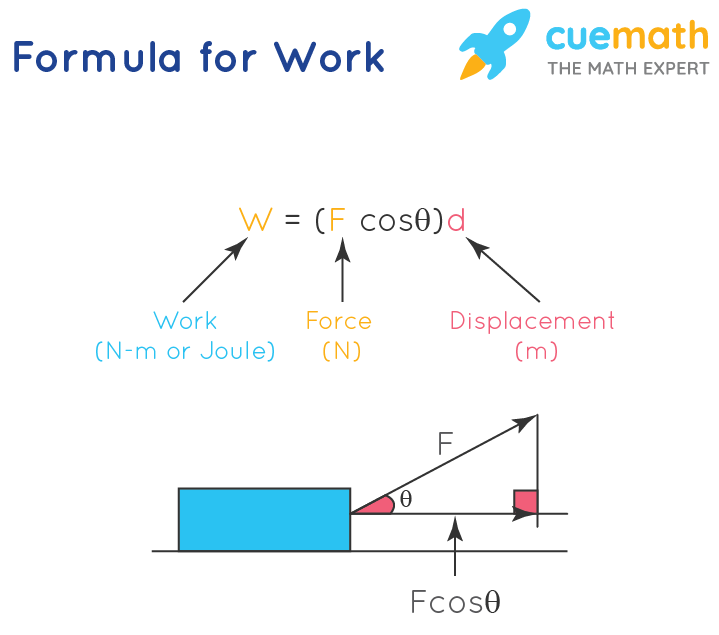 The formula for Work can be expressed as,

Consider a block placed on a frictionless horizontal floor acted upon by a constant force F due to which this block moves through a distance d in a straight line in the direction of the force. 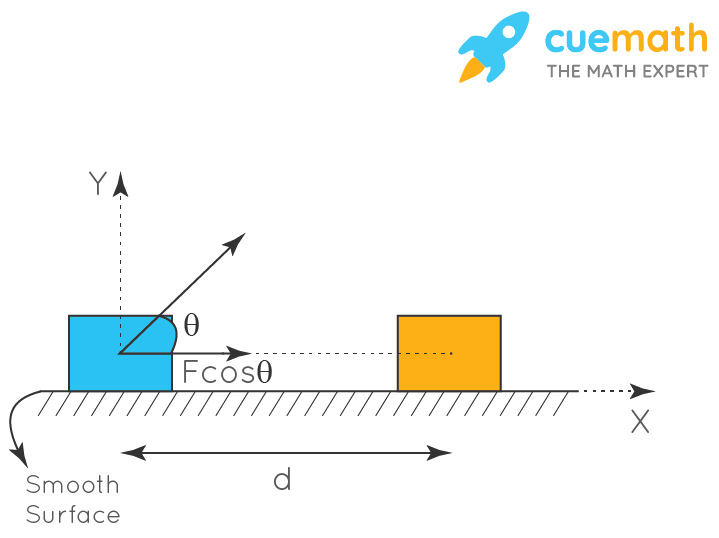 In general, the work done by force F is equal to the change in kinetic energy

Now, if the effective component of force along the direction of displacement is Fcosθ responsible for the displacement of any object in the given direction, then work done by the force F in displacing the body through displacement d is, W=(|F|cosθ)|d|

Example 1: 10 Newton of force is applied on a body which displaces it by 2 meters. Calculate the work done by using the formula for work.
Solution:

Answer: 20 Nm of work is done when a 10 Newton of force displaces an object by 2 meters.

Example 2: A coolie at a railway station carries a bag weighing 100 N through some distance. Calculate the work done by the coolie on the bag by using the formula for work.
Solution:

To find work done by the coolie.

Also, the weight of the bag will be acting in the vertical direction and its motion is in the horizontal direction. So the displacement of the bag in the direction of the force (weight) is zero.

Answer: Work done by the coolie on the bag is zero.

Example 3: Calculate the amount of work done by the force in moving the object through a distance of 7 m if an object is horizontally dragged across the surface by a 150 N force acting parallel to the surface.
Solution:

To find: Work done by the force in moving the object through a distance of 7 m

Since F and d are in the same direction,

θ = 0, [θ is the angle of the force to the direction of movement]

Answer: The amount of work done by the force in moving the object is 800 J.

FAQs on Formula for Work

What is the Work Formula?

The formula for work is defined as the formula to calculate the work done in moving an object. Work done is equal to the product of the magnitude of applied force and the distance the body moves from its initial to the final position. Mathematically Work done Formula is given as, W = Fd

What are the Versions of the Work Formula?

Mathematically, the concept of work done W equals the force f times the distance (d), that is W = f. d and if the force is exerted at an angle θ to the displacement, then work done is calculated as W = f . d cos θ.

What are the Applications of the Work Formula?

Work formula has numerous applications, such as to compute work done, force, or displacement in any problem.

What is d in Work Formula?

In the work formula W = F. d, d is the displacement as in how much the object has moved from its initial place.