As one can imagine, how difficult it would be to count without numbers. There was a time when written numbers did not exist. The earliest counting device would have been the human fingers or toes.

But for greater or bigger numbers, people would depend upon natural resources available to them, such as pebbles, seashells, etc.

The abacus is the most ancient calculating device known. It has endured over time and is still in use in some countries.

The Abacus is a Latin word meaning sand tray. The term originated with the Arabic ‘abq’, which refers to dust or sand. In greek, this becomes ‘abax’ or ‘abakon’ meaning a tablet.

The abacus was used as a counting tool before the advent of the Arabic numeral system.

Merchants and traders needed to maintain an inventory of the goods they bought and sold. When the Hindu-Arabic number system came into use, abaci ( plural of abacus) were adapted for place-value counting.

An abacus or a counting board consists of a wooden frame, rods, and beads. Each rod represents a different place value—ones, tens, hundreds, thousands, and so on.

Each bead represents a number, usually 1 or 5, and can be moved along the rods. Addition and subtraction can easily be performed by moving beads along the wires of the abacus.

The beads that slide along a series of wires or rods set in a frame to represent the decimal places. The standard abacus can be used to perform addition, subtraction, division, and multiplication. It can also be used to extract square-roots and cubic roots.

The abacus frame has a series of vertical rods on which a number of wooden beads are allowed to slide freely. A horizontal beam separates the structure into two sections, known as the upper deck and the lower deck.

One could call it a precursor to the modern-day calculator. Merchants commonly used it in Europe and the Arabic world. Even today, in the modern world of computers and calculators, it is used by traders, merchants, etc. in many parts of the world.

It is still used to teach the basics of arithmetic to children. Download the PDF below to know more about Abacus Basics.

It is the most primitive form of a calculating device, invented somewhere between 300 and 500 B.C. The exact date of the origin of the abacus is unknown.

The first written information about the abacus that survived to the present, is from the Greek historian Herodotus (480-425 B.C.), who mentioned also, that the ancient Egyptians used an abacus.

The oldest abacus survived to the present day, is the so-called Salamis abacus. It is believed to have been found on Salamis, a Greek island, in 1899, hence the name. It was used by the Babylonians around 300 b.c.e.

Drawings of people using counting boards have been found dating back to the same time period.

There is evidence that people were using abacuses in ancient Rome (753 b.c.e.–476, c.e.). A few hand abacuses from that time have been discovered.

They have slots with beads in them that can be moved back and forth in the slots similar to counters on a counting board. They resemble the Chinese and Japanese abacuses, suggesting that the use of the abacus spread to many parts of the world from Greece and Rome to China, Japan, and Russia.

The Chinese called it the Suanpan. Not much is known of its early use, but rules on how to use it emerged in the thirteenth century.

The Japanese abacus is called the Soroban which was not used widely until the seventeenth century. The Soroban is still in use today. The Japanese have yearly examinations and competitions in computations on the Soroban.

The Russians called it the Schoty. Not much is known about how it came to be used in Russia.

To learn more about the diverse history of the Abacus, click Abacus: A brief history from Babylon to Japan.

For many of us, Mathematics is the subject we love to hate. Having said that, calculations and numbers are part of our everyday lives.

An abacus has beads that slide on rods.

The most common abacus is split into two basic rows: 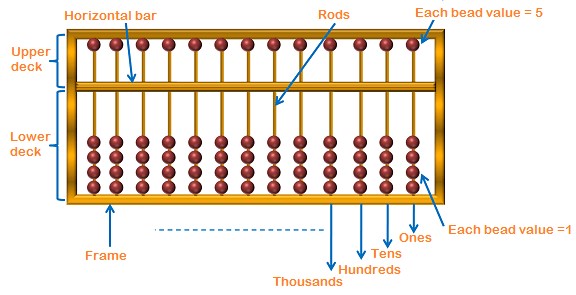 To add 1234 and 5678, enter 1234 on the abacus by pushing up four beads in the one's place, three in the tens place, two in the hundreds place, and one in the thousands place

Since adding the two numbers in the tens place will result in 10, you'll carry over a 1 to the hundred places, making it a 9 in that column. Next, put all the beads down in the tens place, leaving it zero.

In the ones column, you'll do essentially the same thing. Eight plus 4 equals 12, so you'll carry the one over to the tens place, making it 1. This leaves you with 2 in one's place.

To learn more about Addition on Abacus, check out Complete Guide: How to add two numbers using Abacus?

Here we reverse the process. Borrow digits from the previous column instead of carrying them over. If you are subtracting 867 from 932, enter 932 into the abacus, start subtracting column-by-column starting on your left.

Eight removed from nine is one, so a single bead is left up in the hundreds place.

Do the same thing in the ones place, "borrowing" a bead from the tens place (making it 6) to subtract 7 from 12 instead of 2.

Similarly, multiplications and divisions can be done. All it requires is concentration and counting ability.

To learn more about subtraction on Abacus, check out Complete Guide: How to subtract two numbers using Abacus?.

Despite the abacus being ancient in its origin, it is still in use today. It has been a boon for the visually challenged as learning placement value, and other calculations can be done by touch. In many countries abacus is taught to early school goers as it has been seen that it helps subtends have a better understanding of numbers.

It is a counting frame used for mathematical calculations. It is the oldest calculating device known to mankind and was discovered by the Babylons around 300 B.C.

The abacus was first discovered by the Babylons in 300 B.C. but it also has traces of being used during ancient times near east, China, Japan, and Europe.

What are the advantages of using an abacus?

Removes the fear of mathematics by making arithmetic calculations easier. It is also said to improve one’s concentration, Listening Skills, Memory, Speed, and accuracy, among other things.

Who invented the abacus?

Many study's have shown that no one in particular has made the abacus but many believe it was made in China. An adapted abacus, invented by Tim Cranmer, called a Cranmer abacus is still commonly used by individuals who are blind. A piece of soft fabric or rubber is placed behind the beads so that they do not move inadvertently.