60 degree angle is an acute angle, as angles smaller than a right angle (less than 90°) are called acute angles. In the case of a geometric angle, the arc is centered at the vertex and constrained by the sides. In the case of rotation, the arc is centered in the center of rotation and is limited to any other point and its image when rotated. Let us learn more about 60-degree angles, ways of constructing them and solve a few examples to understand the concept better.

We know that an angle is formed when two rays meet at a vertex. If the angle formed at the vertex O measures 60 degrees, we call it a 60-degree angle. The measure of each angle of an equilateral triangle is 60°. Therefore, it is also called a 60-degree angle triangle. Angles can also be represented in radians i.e. pi (π) and pi (π) radians = 180°. Therefore, 60° can be expressed in radians as π/3 radians. 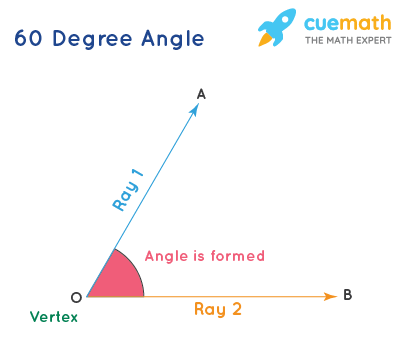 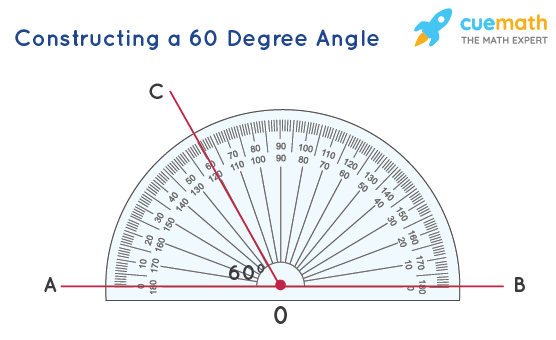 Angles are all around us. For example, when we open our mouths, our lips form an angle. When the minute hand of a clock is at 12 and the hour hand is at 2, the angle formed between the two hands is 60°. Some road signs are in the shape of an equilateral triangle, and the measure of each angle of an equilateral triangle is 60°. A 60-degree angle is used in architecture to construct designer houses, doors, and window grills. 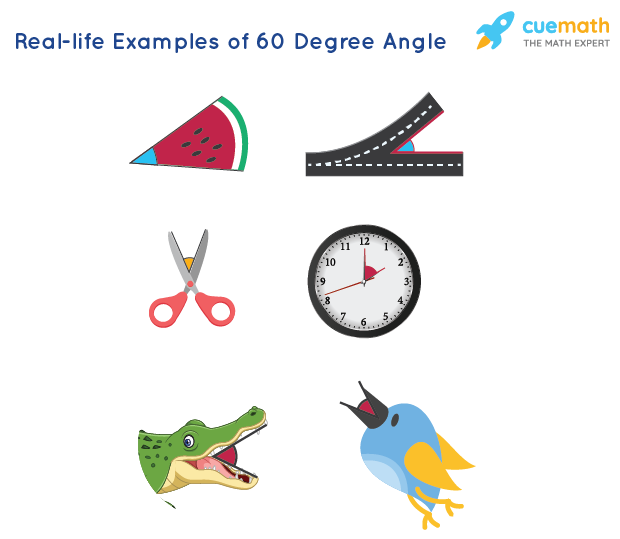 Check out these interesting articles on 60 Degree Angle. Click to know more!

What is the Angle of 60 Degree?

A 60 degrees angle is an acute angle because it is less than 90 degrees. 60° in radians is π/3 and the measure of each angle of an equilateral triangle is 60°. Therefore, it is also called a 60-degree angle triangle.

How do you Construct a 60 Degree Angle Using a Protractor?

What do You Call a 60-Degree Angle?

An angle whose measure is more than 0° but less than 90° is called an acute angle. Angles measuring 30°, 40°, 60° are all acute angles. Therefore a 60-degree angle is known as an acute angle.

How do You Find a 60 Degree Angle Without a Protractor?

Here are the steps required in constructing a 60-degree angle without a protractor:

We already have two arms of the angle. We can join the other ends of the two arms, form a triangle, measure each side's length, and use the trigonometric ratio to find the angle measures.

How Many 60 Degrees Angles Does it Take to Make a Full Turn?

Angles are measured in degrees and there are 360 degrees in one full rotation that completes one full circle.  Since 60 × 6 = 360, therefore there are six 60° angles in a full turn.