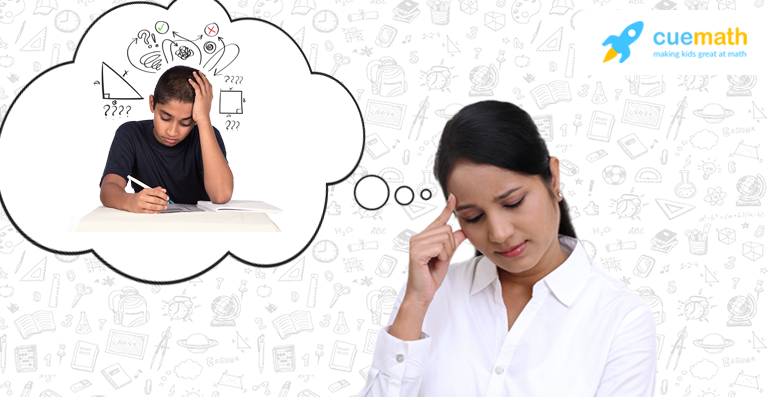 Does your child find math difficult and struggle with it? Has your child been called weak in math? In this article, we will explore this problem in-depth, and also outline broad directions to deal with the problem.

If we claimed that EVERY child is a “math person”, it would be difficult for most parents to believe. This is because as parents, you are only aware of the school results of your child. If your child has scored low, it is not his/her fault. There are many factors that affect a child’s grasp of math.

What are the top reasons for weakness in math among children?

1. Inability for a child to visualize mathematical concepts.

2. Rote learning methods- where a child is given formulas and statements to learn by heart.

4. The stress of scoring high marks. Good marks should be a consequence of conceptual understanding.

It is important to understand that labeling children as weak or strong is never going to help. Unfortunately, teachers as well as parents tend to do this constantly. Research has shown that students who are labeled weak when young, tend to under perform throughout their academic lives. It’s as if they internalize the label and keep reinforcing this “weakness” in their minds.

On the other hand, students who are always praised for being strong in math might become complacent and not strive hard enough to excel further. Thus, we need to get rid of this fixed mindset framework – of bucketing children into fixed ability categories – and move towards a growth mindset framework, which implies that every child’s ability can grow – and grow significantly.

If we do a root cause analysis of the problem – why the child is currently struggling with math – we will find that it is almost entirely due the way the child has learnt math or has been taught math. Every child is born with never-ending curiosity. And mathematics is a subject which has the potential to give any child a playground to unleash that curiosity. Unfortunately, from a very young age, children are exposed to math in a highly rote-memorization oriented manner. Children are expected to mug up facts and formulas and solve repetitive drills based on this superficial learning. Given this, it is not surprising that many children revolt against math – because what they learn in the name of math is not really math! Hence, they end up struggling with not true math, but this flawed version of math which they typically learn in school.

What is the solution? This is not a trivial problem, but with sustained intervention from the parent’s side, a lot of improvement is possible.

#1. Encourage the child to enjoy the subject by focusing on the why rather than the what. The child will never improve in math if he/she does not enjoy the subject. You cannot force math down their throat if they are unwilling to learn. Thus, scoldings and punishments will never work. What you really need to work towards is enabling the child to appreciate and eventually love math. That will happen only if his/her natural sense of curiosity is encouraged rather than suppressed.  Encourage the child to ask the why behind the what. Why do we need multiplication tables? Why do we learn improper fractions? Why does the long-division algorithm work? Why do two odd numbers add up to an even number? Just this one change of focusing on the why rather than the what will have a deep impact on the way the child approaches math.

#2. Take the pressure of marks off the child’s mind. The child is already struggling with math. Adding the pressure of doing well in school exams on top of this will only exacerbate the child’s misery, and push the child further away from a genuine fundamental understanding of math concepts. Do not impose your expectations of marks on the child. Remember that the education of a child is a long-term marathon rather than a short-term sprint. It is alright if the child loses a sprint – focus on the marathon. Just telling your child that you place more importance on true understanding rather than marks – and hence the child should work towards that goal rather than marks – will create a dramatic creative space in your child’s mind. And yes, good marks will come as a consequence of fundamental understanding, but fundamental understanding will not come as a consequence of good marks. So which would you prefer?

#3. Encourage the child to explore and make mistakes. Many parents tend to believe that math is all about getting the right answers. Making mistakes is frowned upon. Children are taught elaborate algorithms and then expected to apply them flawlessly. Parents fret about their children making silly mistakes. In our opinion, this focus on outright accuracy is ridiculous. Research has shown that even when children make mistakes, they learn. In fact, in some cases, they might learn more. We should encourage children to learn math by exploring ideas rather than memorizing them – and in this exploration process, it is alright if they make a few mistakes. Let them fall – as many times as they may – eventually they will learn to walk and even run!

#4. Encourage the child to ask a lot of why’s in school. We have seen a lot of examples of students building an aversion to mathematics because their curiosity regarding math was not addressed properly by their school teachers. They were discouraged from asking too many questions. Because teachers are time-pressed to complete the syllabus, there is a tendency to skim through concepts without spending a significant amount of time on any concept. This reason is one of the biggest contributors to a child’s eventual struggle with math. As a parent, it is important for you to be aware of how your child’s school teachers are teaching. Are they open to entertaining a student’s curiosity, or do they discourage questioning? If it is the latter case, alarm bells should ring and you should be heading to school to have a word with the teacher!

#5. Have perspective and patience. Parents have an unmatched vantage point to monitor and guide their children’s learning trajectories. Utilize this position wisely. Take a long-term perspective and have patience. Don’t fret and don’t get frustrated, and if you do – don’t show it in front of the child and pressurize the child further. Don’t impose unrealistic or unreasonable expectations on the child just to satisfy yourself, as that will not serve any purpose in the long run. In your daily interactions with the child, constantly reinforce a vibe of positivity around math. Remember that for a deep understanding of math concepts, the why is more important than the what. Encourage the child to approach math from a why-framework rather than a what-framework.

Helping a child struggling with math to get back on-track is not an easy job. But with the right approach, spectacular transformations are possible.

For every parent whose child is struggling with math, we highly recommend watching this video by Carol Dweck titled The power of believing that you can improve.