Who was Thales of Miletus?

Why is Thales of Miletus famous?

Thales of Miletus was a Greek Mathematician, astronomer, and pre-socratic philosopher. He lived during the 6th and 5th century BC in Miletus, which is present in modern-day Turkey.

He is known as one of the legendry Seven Wise Men. He is known to have introduced the idea of scientific philosophy. Little is known for sure about Thales, aside from what other philosophers said about him, but he is still an essential figure for being the first pre-socratic philosopher.

He is also known for his contribution to mathematics. He used geometry to calculate the height of pyramids and the distance between a ship and the shore.

His most famous proposition was that everything is fundamentally made up of water. He believed that the earth is a flat mass floating on a vast sea.

Thales paved the way for the Socratic era and the classical philosophers to establish Western philosophy's central themes.

Many of his theories and beliefs will sound strange to us, but they were considered groundbreaking at that time.

The Life of Thales - PDF

The Personal Life of Thales

The dates of Thale’s life are not known but roughly estimated. Thales was probably born around 625 BC in Miletus in Ionia, Asia minor. (Present-day Turkey)

It is believed that he was never married and that he didn’t marry because he did not like the idea of worrying about children. Though in his later years, anxious for family, he adopted his nephew.

He is said to have visited Egypt at one point in his life, where he learned about geometry. He is often hailed as the first Greek mathematician.

He wanted to break away from mythology ad explain the world with natural, practical theories and hypotheses.

Thales was also a keenly observant scientist. He successfully managed to predict the solar eclipse of May 28, 585 BC, and to this day now, we do not know how he did that.

Thales died at the age of 78 during the 58th olympiad games, where he suffered a heat stroke while watching the games.

How did Thales contribute to Philosophy?

Thales was deemed unique for rejecting the Greek pantheon of gods and looking for predictable laws in nature, much like modern scientists.

In other words, Thales thought the world was rational, orderly, and understandable through inquiry.

According to him, there had to be something underneath everything, unifying everything. Thales wanted to explain life by this.

Of all the elements, Thales identified water as the unifying force. But why water? Well, think about it.

In ancient times, the laws of physics were not well understood. Rivers flow to the seas, waves crash, tides went in and out, and as they did not know gravity, the water seemed to move independently.

Also, every living thing needs water. We can live months without food but only three days without water.

If everything alive needs water, water must be an essential ingredient for life. So water could explain motion, energy, the origin of the earth, and substances' ability to transform.

Most of the pre-socratic philosophers that came after him followed him in explaining nature as deriving from a unity of everything instead of resorting to mythological and supernatural explanations.

Of course, now we know that Thales was highly mistaken. Still, he started to think scientifically and rationally back in the time when the people believed gods were responsible for everything.

Thales was also known for his innovations in the field of Geometry. He had a theoretical as well as practical knowledge and understanding of geometry.

Thales measured the height of pyramids by their shadows at the moment when his own shadow was equal to his height. He also measured the distances of ships at sea with the help of geometry.

Thales of Miletus is credited with the discovery of 5 geometric theorems: Thales is very well known for the Thales theorem, which is taught in schools to date.

Thales theorem states that if A, B, and C are distinct points on a circle where the line AC is a diameter, then \(∠ABC\) is a right angle. 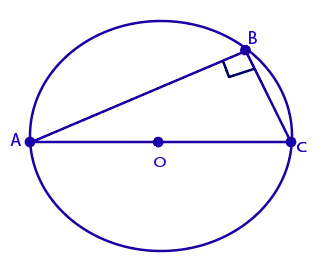 One interesting fact is that Thales is said to have offered an ox as a sacrifice to a Greek god, as thanks for this theorem's discovery.

Thales also introduced the Basic Proportionality theorem, which is one of the highly used concepts in geometry. In the above figure, PQ is drawn parallel to side YZ of triangle XYZ. Thus, according to the theorem, the ratio of XP and PY will be equal to the ratio of XQ and QZ.

Thales is considered to be a credible and thoughtful person even though he was wrong about many things.

Thales used the little knowledge he had to come up with good theories. Thanks to him, the later pre-socratics would form new ideas about the world, eventually leading to Socrates, a man who forever changed the western world. Learning about mathematics and its history is a very enriching journey. Join us on an enriching journey, sign up for a free trial.

Why is Thales famous?

Thales is known as one of the seven wise men. He is renowned mainly for his cosmology of water as the essence of all matter and that earth is a flat disk floating in the sea.

Where did Thales study?

Thales is said to have visited Egypt at one point in his life, where he learned about geometry. He is also often hailed as the first Greek mathematician and the world's first philosopher.

Is Thales the first philosopher?

Yes, Thales is considered to be the first philosopher.

What did Thales discover?

Thales of Miletus is credited with the discovery of 5 geometric theorems: