Census is the collection of data from the entire population and not just a selected bunch of groups. The process of acquiring this number and accumulating the count is the census count which also might occur on a regular basis. For example, it is used while conducting a survey, a comparison between data, etc. Let us learn more about the census, the method of calculating, and solve a few examples.

By definition, census is considered as the process of calculating, acquiring, and recording data in a systematic manner about a certain given population. It is mostly used while collecting data on national population, housing censuses, agriculture, business, supplies, etc. This data provided complete information about job details, age factors, socioeconomic details, population size, and educational qualification of the group of the population being surveyed. Census is both used in math and statistics where it helps in collecting information about the population in different contexts such as backgrounds, place of stay, etc.

Census is useful in different areas or fields, the uses are as follows:

Census is the process of finding and recording data about every member of a population that is mostly connected with national data, smaller populations, etc. For example, to find the number of dog owners, people above the age of 75, etc. Sampling is the opposite of census where it only includes a small percentage of the population. The accuracy in the census is more detailed than in sampling as it deals with only smaller groups. In other words, a census is generally more accurate and ultimately more useful than a sample study. For example, a census counts all of the women in Texas and records their ages. A sample might randomly select 1,000 women in Texas and ask each of them their age. The sample could offer an estimate of how many women in Texas are over 50 while a survey would identify exactly how many women in Texas are over 50. Census is considered to be an expensive method compared to sampling. 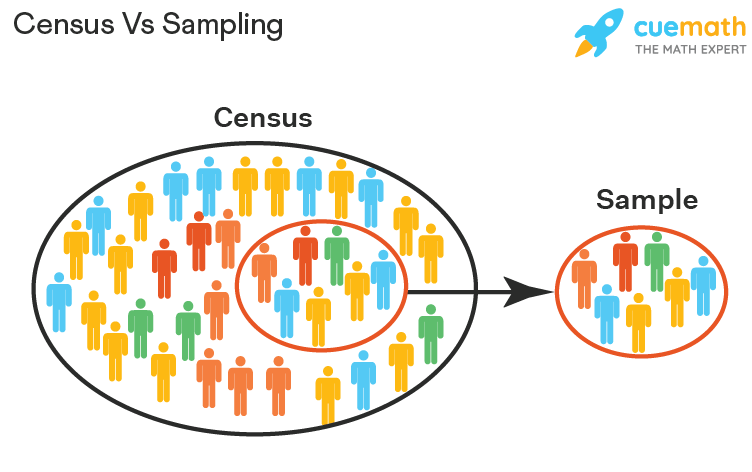 Listed below are a few topics related to census.

What is Sample and Census in Math?

Census is the process of collecting data about everyone or everything in a population. It is also called complete enumeration. Whereas a sample is a subset of the unit in the population that represents data of a selected group of people in the population.

What is Census in Statistics?

In statistics, census is a survey that is conducted on the entire set of observations that is owned by the population. For example, calculating the population, the production of crops, the traffic on a particular road, etc.

In simple terms, census is the collection of data from the entire population on business, agriculture, etc. This data provided complete information about job details, age factors, socioeconomic details, population size, and educational qualification of the group of the population being surveyed.

What is the Difference Between Census and Sampling?