Least square method is the process of finding a regression line or best-fitted line for any data set that is described by an equation. This method requires reducing the sum of the squares of the residual parts of the points from the curve or line and the trend of outcomes is found quantitatively. The method of curve fitting is seen while regression analysis and the fitting equations to derive the curve is the least square method.

Let us look at a simple example, Ms. Dolma said in the class "Hey students who spend more time on their assignments are getting better grades". A student wants to estimate his grade for spending 2.3 hours on an assignment. Through the magic of the least-squares method, it is possible to determine the predictive model that will help him estimate the grades far more accurately. This method is much simpler because it requires nothing more than some data and maybe a calculator.

In this section, we’re going to explore least squares, understand what it means, learn the general formula, steps to plot it on a graph, know what are its limitations, and see what tricks we can use with least squares.

The least-squares method is a statistical method used to find the line of best fit of the form of an equation such as y = mx + b to the given data. The curve of the equation is called the regression line. Our main objective in this method is to reduce the sum of the squares of errors as much as possible. This is the reason this method is called the least-squares method. This method is often used in data fitting where the best fit result is assumed to reduce the sum of squared errors that is considered to be the difference between the observed values and corresponding fitted value. The sum of squared errors helps in finding the variation in observed data. For example, we have 4 data points and using this method we arrive at the following graph. 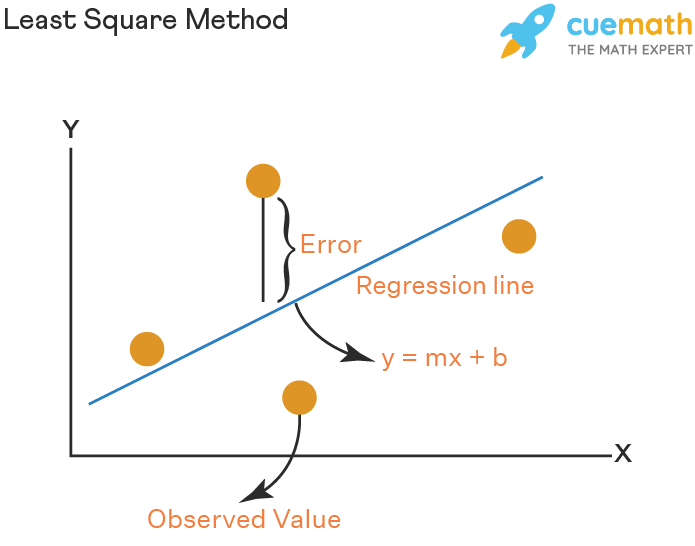 Even though the least-squares method is considered the best method to find the line of best fit, it has a few limitations. They are:

Look at the graph below, the straight line shows the potential relationship between the independent variable and the dependent variable. The ultimate goal of this method is to reduce this difference between the observed response and the response predicted by the regression line. Less residual means that the model fits better. The data points need to be minimized by the method of reducing residuals of each point from the line. There are vertical residuals and perpendicular residuals. Vertical is mostly used in polynomials and hyperplane problems while perpendicular is used in general as seen in the image below. 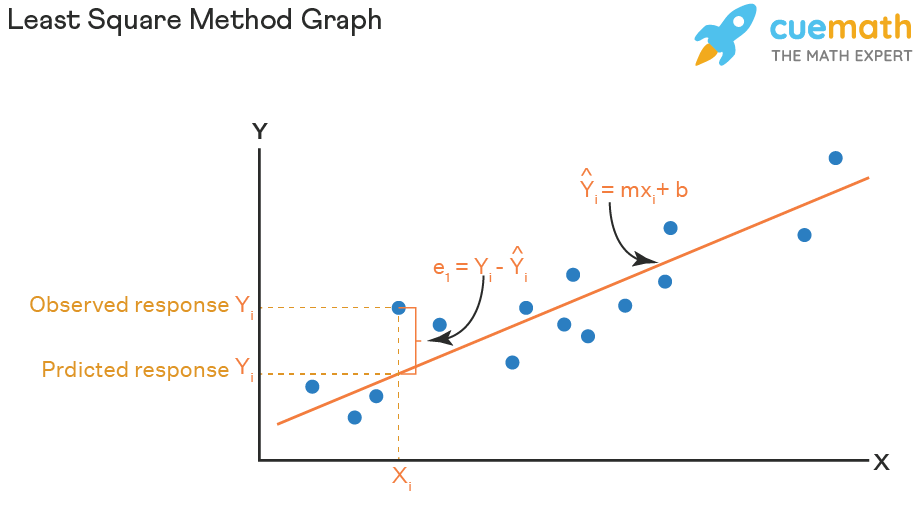 Least-square method is the curve that best fits a set of observations with a minimum sum of squared residuals or errors. Let us assume that the given points of data are (x1, y1), (x2, y2), (x3, y3), …, (xn, yn) in which all x’s are independent variables, while all y’s are dependent ones. This method is used to find a linear line of the form y = mx + b, where y and x are variables, m is the slope, and b is the y-intercept. The formula to calculate slope m and the value of b is given by:

Here, n is the number of data points.

Following are the steps to calculate the least square using the above formulas.

Let us look at an example to understand this better.

Example: Let's say we have data as shown below.

Solution: We will follow the steps to find the linear line.

Find the value of m by using the formula,

Find the value of b by using the formula,

Listed below are a few topics related to least-square method.

What are Ordinary Least Squares Used For?

The ordinary least squares method is used to find the predictive model that best fits our data points.

Is Least Squares the Same as Linear Regression?

How do Outliers Affect the Least-Squares Regression Line?

The presence of unusual data points can skew the results of the linear regression. This makes the validity of the model very critical to obtain sound answers to the questions motivating the formation of the predictive model.

What is Least Square Method Formula?

For determining the equation of line for any data, we need to use the equation y = mx + b. The least-square method formula is by finding the value of both m and b by using the formulas:

Here, n is the number of data points.

What is Least Square Method in Regression?

The least-square regression helps in calculating the best fit line of the set of data from both the activity levels and corresponding total costs. The idea behind the calculation is to minimize the sum of the squares of the vertical errors between the data points and cost function.

Why Least Square Method is Used?

Least squares is used as an equivalent to maximum likelihood when the model residuals are normally distributed with mean of 0.

What is Least Square Curve Fitting?

Least square method is the process of fitting a curve according to the given data. It is one of the methods used to determine the trend line for the given data.