In this mini-lesson, we will explore the world of Euclidean geometry by understanding euclidean and non-euclidean geometry, the postulates and axioms, and how to apply them while solving problems. We will also discover interesting facts around them.

The Alexandrian Greek mathematician Euclid has contributed the whole of his life towards new inventions and discoveries in mathematics.

The mathematics community is so thankful for his work on geometry.

The "Elements" is the textbook he wrote on geometry which contains his postulates and axioms on basic geometry.

The Elements series consists of 13 books, the books starting from 1th to 4th and 6th discuss only plane geometry. 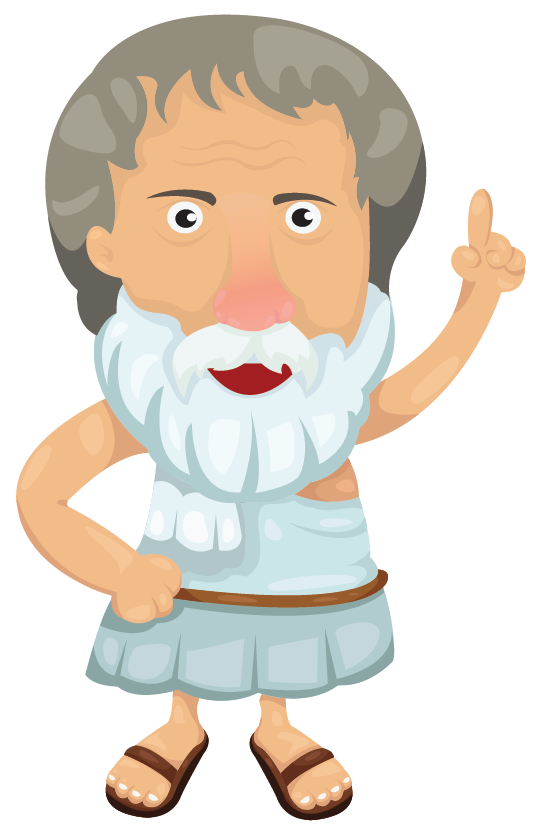 Do you know that the work of Euclid is known for 2000 years and still many of us use his work?

What Is Euclidean Geometry?

In Euclidean geometry, we study plane and solid figures based on postulates and axioms defined by Euclid. Euclid is known as the father of geometry because of the foundation laid by him. Euclid defined a basic set of rules and theorems for a proper study of geometry. 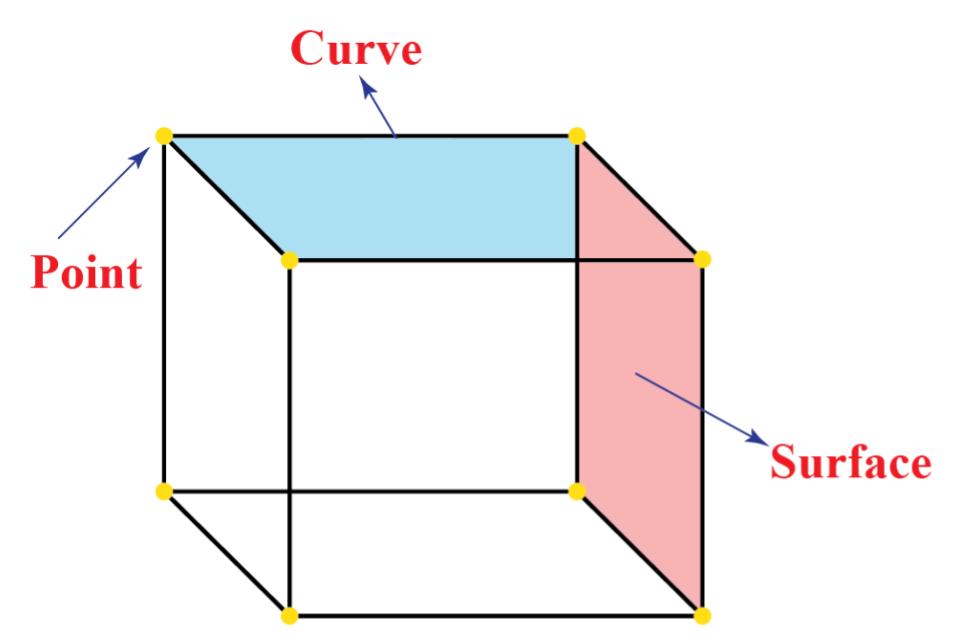 The Greek mathematician Euclid provided the definitions of point, line, and plane (surface). According to Euclid, a solid shape has a shape, size, and position and it can be moved from one position to another.

The boundaries of these solids are called surfaces, these surfaces separate one part of the space from another and have no thickness.

When we moved down the hierarchy of the parts of solids, the dimensions of each part are also reducing by one.

In each of the three steps from solid to point, we are losing one dimension.

What Is Non-Euclidean Geometry?

The Greek astronomer Ptolemy wrote in his book Geography that 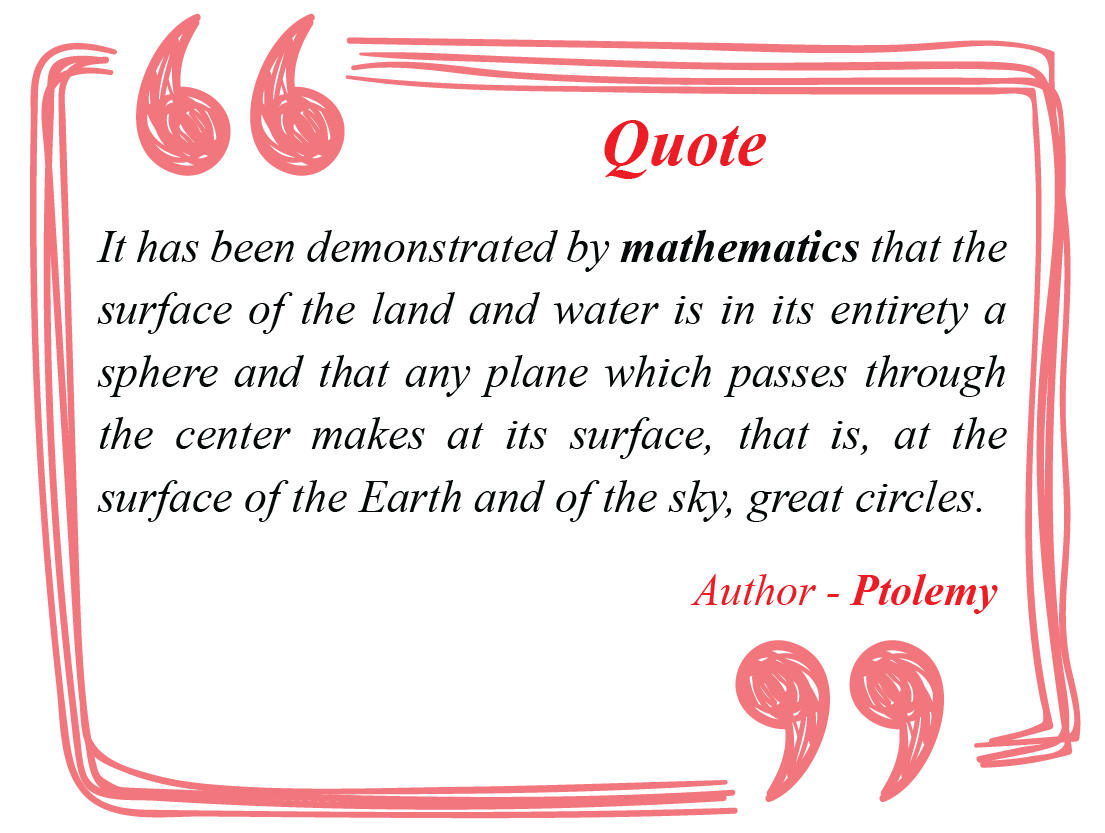 We all know that the earth is spherical, but how can we project the whole of the earth on a plane surface with the help of maps?

While converting the actual distance or points from spherical geometry to Euclid's geometry (Basic Geometry) we have to change actual distances, location of points, area of the regions, and actual angles.

In 1868, Italian mathematician Eugenio Beltrami described a pseudosphere, that has constant negative curvature, but the pseudosphere is not a complete demonstration of hyperbolic geometry.

The below image shows a hyperbolic surface. 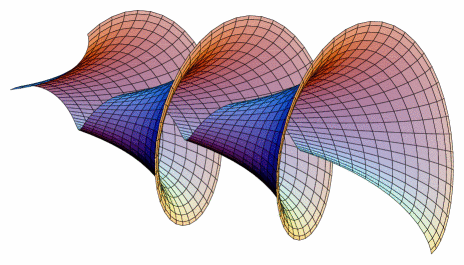 The most famous Greek mathematician has proposed five postulates on geometry, these postulates are widely accepted by the mathematics community.

“A straight line segment can be drawn for any two given points.”

For any two points, a line can be drawn such that it passes through both of them.

“To produce a finite line segment continuously in a straight line.”

A line segment can be extended in any direction to form a line.

“To describe a circle with any center and radius.”

A circle can be defined by taking any point as the center and having a specified radius.

“That all right angles are equal.”

Any angle that measures 90° is equal to another 90° angle, irrespective of the length of the lines forming the angles.

“If two lines are intersected by a third in such a way that the sum of the inner angles on one side is less than two right angles, then the two lines will intersect each other on that side if produced indefinitely.”

When there are two lines cut by a third line, if the sum of the interior angles is less than 180°, then the two lines will meet when extended on that side. Axioms or postulates are the assumptions of the obvious universal truths. They are not proved.

Listed below are Euclid’s Axioms:

Kristine marked three points A, B, and C on a line such that, B lies between A and C.

AC coincides with AB + BC.

Euclid’s Axiom (4) says that things that coincide with one another are equal to one another. So, it can be deduced that.

It has been assumed that there is a unique line passing through two points.

Help Paul to prove that an equilateral triangle can be constructed on any given line segment.

A line segment of any length is given, say AB. 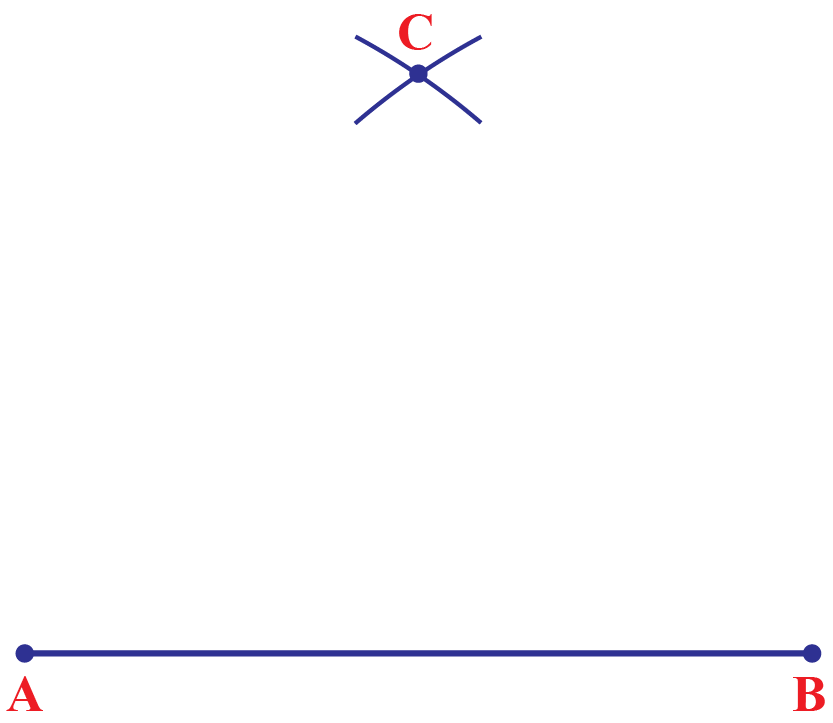 Now, draw the line segments AC and BC to form \(\triangle \text{ABC}\). 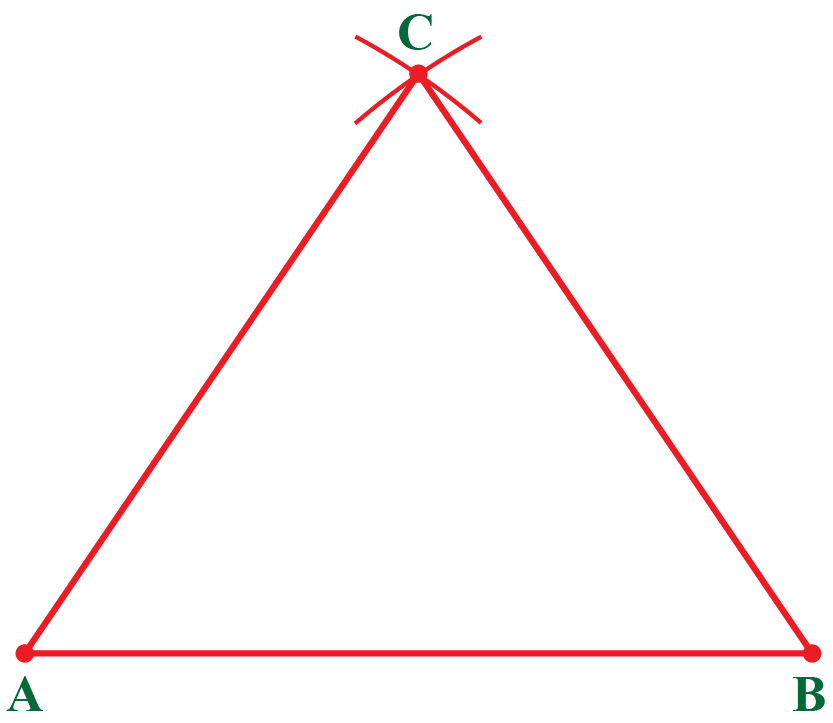 This mini-lesson introduced you to the fascinating concept of Euclidean geometry. The math journey around Euclidean Geometry starts with what a student already knows, and goes on to creatively crafting a fresh concept in the young minds. Done in a way that is not only relatable and easy to grasp, but also will stay with them forever. You have learned about axioms, postulates, and Non-Euclidean geometry in this lesson. Here lies the magic with Cuemath.

At Cuemath, our team of math experts is dedicated to making learning fun for our favorite readers, the students! Through an interactive and engaging learning-teaching-learning approach, the teachers explore all angles of a topic. Be it simulations, online classes, doubt sessions, or any other form of relation, it’s the logical thinking and smart learning approach that we at Cuemath believe in.

1. What is Euclid famous for?

Euclid the great mathematician is famous for his work in the field of mathematics and science, but primarily people consider Euclid for his work on geometry.

Euclid has published his book Elements around 2000 years ago.

The Elements consists of a total of 13 books, in which the books from 1st to 4th and 6th contain plane geometry.

2. What is the difference between Euclidean and non-Euclidean geometry?

Euclidean geometry is basic geometry which deals in solids, planes, lines, and points, we use Euclid's geometry in our basic mathematics

3. What is Euclid’s fifth postulate?

Euclid's fifth postulate suggests that "If two lines are intersected by a third in such a way that the sum of the inner angles on one side is less than two right angles, then the two lines will intersect each other on that side if produced indefinitely."