Patterns include a series or sequence that generally repeats itself. The patterns that we observe in our daily lives are those of colors, actions, shapes, numbers, etc. They can be related to any event or object and can be finite or infinite. In mathematics, patterns are a set of numbers arranged in a sequence such that they are related to each other in a specific rule. These rules define a way to calculate or solve problems. For example, in a sequence of 3,6,9,12,_, each number is increasing by 3. So, according to the pattern, the last number will be 12 + 3 = 15.

The following figure shows the different types of patterns and sequences that can be formed with numbers. 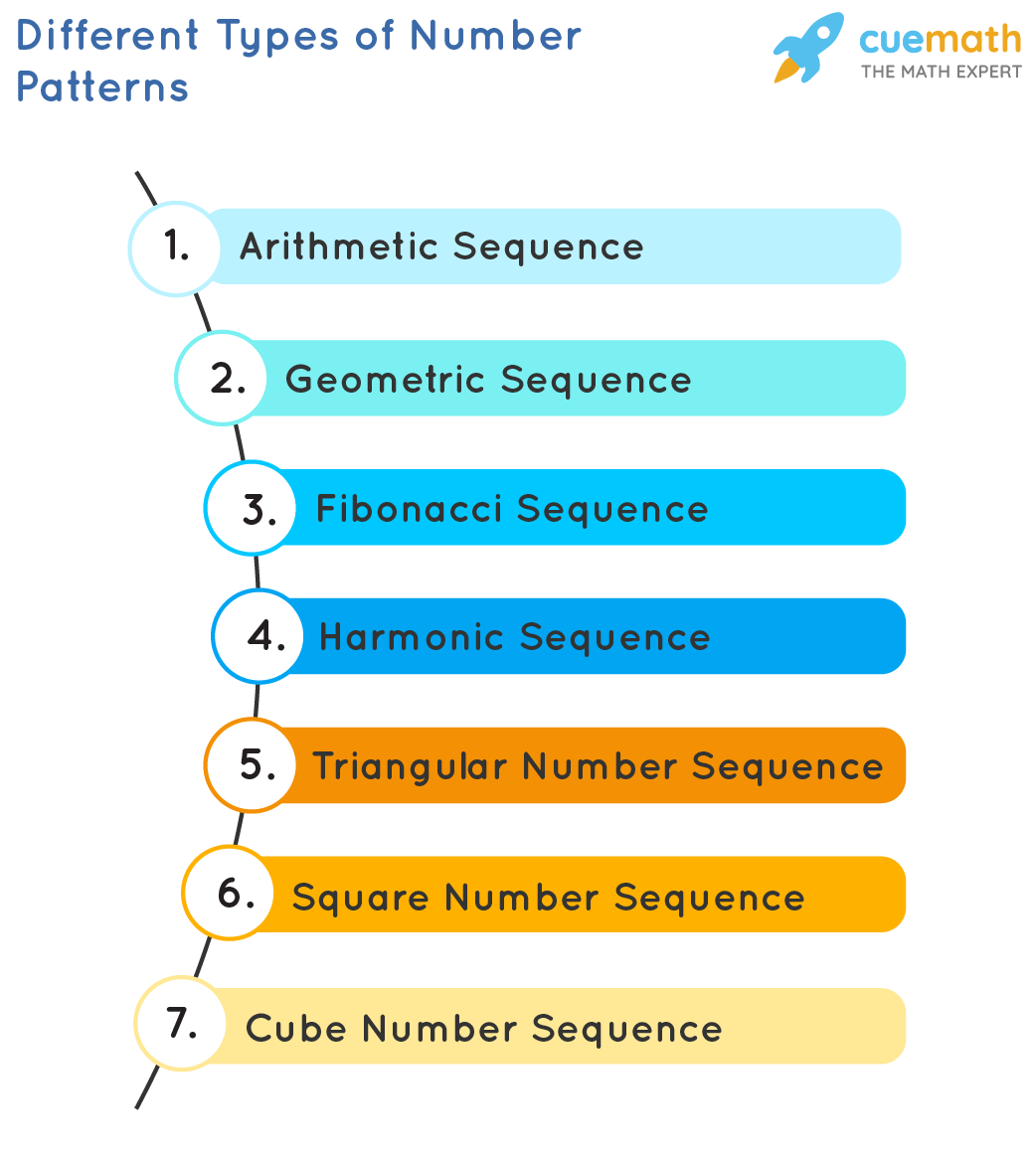 Number pattern is the most common type of pattern in mathematics where a list of numbers follows a certain sequence based on a rule. The different types of number patterns are algebraic or arithmetic patterns, geometric patterns, and the Fibonacci pattern.

In the given series, it can be seen that each number is obtained by multiplying 3 with the previous number. So, the missing number numbers can also be determined using this rule. Therefore, the missing numbers are 54 × 3 = 162 and 486 × 3 = 1458.

To create a complete pattern, there are a set of rules to be considered. To apply the rule, we need to understand the nature of the sequence and the difference between the two successive numbers. It takes some amount of guess work and checking to see whether the rule works throughout the whole series.

There are two basic divisions to find out the rules in number patterns:

Let us understand this with an example:

Similarly, we can find out the pattern rules for any given series of numbers.

There are three types of patterns that are commonly used in mathematics:

Observe the following figure which shows a repeating pattern of the shapes. Here are some of the key points to be remembered when dealing with patterns.

What is Meant by Patterns in Maths?

In Math, a pattern is also known as a sequence. The list of numbers that are arranged using specific rules is called a pattern. For example, in the series: 2,4,6,8,10.... , the numbers are arranged in a pattern which shows even numbers.

The two different types of number patterns are:

What is a Number Pattern?

A number pattern shows the relationship between a given set of numbers. It is defined as the list of numbers that follow a certain pattern or sequence. For example, in the given series: 5, 10, 15, 20, 25, 30... , we can see that each term in the pattern is obtained by adding 5 to the previous term.

How to Teach Patterns in Math?

Patterns can be taught through simple exercises like arranging different beads in a string in a particular order, or taking the building blocks of different shapes and sizes and arranging them in a particular sequence which creates a series. For number patterns, the factors, multiples, squares, and cubes of numbers help in understanding patterns easily

What are the Common Types of Patterns?

The common types of patterns are: