Let us take a look at some interesting facts about the number 12 before we begin this lesson. 12 is considered a math-friendly number. There are 12 months in a year. 12 is the total number of face cards in a deck. There are 12 numbers on the face of a clock. In English, twelve is the largest number comprised of just one syllable.

What Is the Square Root of 12?

Is Square Root of 12 Rational or Irrational?

A number which cannot be expressed as a ratio of two integers is an irrational number. The decimal form of the irrational number will be non-terminating (i.e. it never ends) and non-recurring (i.e. the decimal part of the number never repeats a pattern).

Now let us look at the square root of 12.

How to Find the Square Root of 12?

Let us follow the steps to find the square root of 12 by long division.

Step 1: Make a pair of digits (by placing a bar over it) from the unit's place since our number is 12.

Let us represent it inside the division symbol.

Step 2: Find a number such that when you multiply it with itself, the product is less than or equal to 12

Step 3: Let us place a decimal point and a pair of zeros next to it and continue our division.

Now, multiply the quotient by 2 and the product becomes the starting digit of our next divisor.

Step 4: Choose a number in the unit's place for the new divisor such that its product with a number is less than or equal to 300.

Step 5:  Bring down the next pair of zeros and multiply the quotient 34 (ignore the decimal) by 2, which is 68, and the starting digit of the new divisor.

Step 6: Choose a number in the unit's place for the new divisor such that its product with a number is less than or equal to 4400.

Step 7: Add more pairs of zeros and repeat the process of finding the new divisor and product as in step 2. 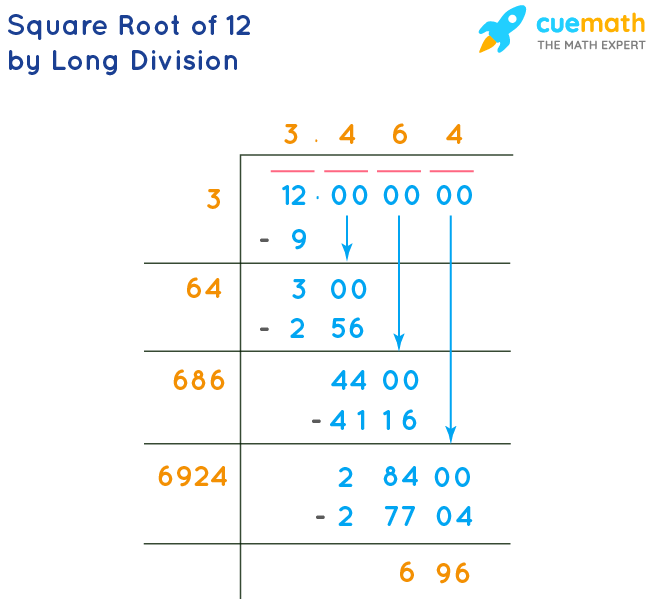 FAQs on Square Root of 12

What is the square root of 12?

How do you find the square root of 12?

We can find the square root of 12 by using the long division method.

Is square root of 12 a real number?

No, the square root of 12 is not a real number.

What is the square root of 12 in simplified form?