Area of an Ellipse

Area of an Ellipse
Go back to  'Coordinate Geometry'

Have you ever observed :

Can you identify something common about them?

Yes! all are oval in shape or also known as elliptical.

Let us explore a bit more about this shape while discussing its area and its properties.

What Is an Ellipse?

It is a shape obtained by connecting all the points which are at a constant distance from the two fixed points on the plane.

The fixed points are called foci. F1 and F2 are the two foci. 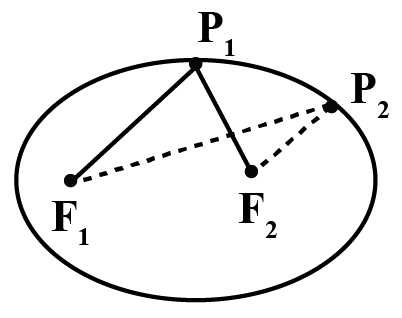 Ellipse is the locus of all the points, whose sum of distances from two fixed points on a plane is constant. 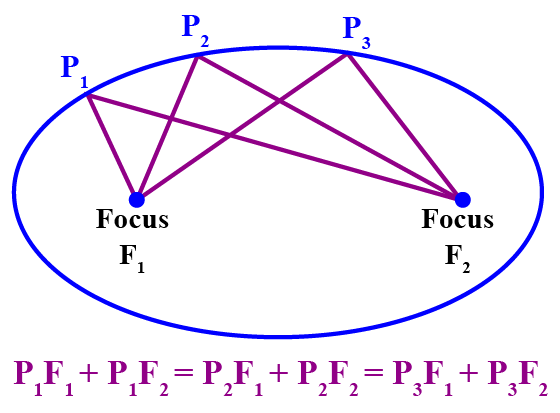 How to Find the Area of an Ellipse?

As an ellipse is not a perfect circle, the distance from the center of the ellipse to the points on the circumference is not constant.

So, an ellipse has two radii. The longest chord in the ellipse is called the major axis of the ellipse.

The minor axis is the chord that is the perpendicular bisector to the major axis.

Area of an Ellipse

The formula to find the area of an ellipse is given by :

Process of Finding the Area of an Ellipse

Find the values of the semi-major axis (a) and the semi-minor axis (b) and then use the formula for the area of an ellipse.

Area of an Ellipse Calculator

Let us find the area of an ellipse with any given lengths of major and minor axes.

Type the length of the major axis and the minor axis respectively, for which you need to find the area in the boxes and press "calculate".  (\(\pi=3.1416\)) Harry has to find the cross-sectional area of football with its semi-major axis as 5.5 inches and semi-minor axis as 3.5 inches.

Can you help him out? American football is in the shape of an ellipse.

Interactive Questions on Area of an Ellipse

The mini-lesson targeted the fascinating concept of the area of an ellipse. The math journey around the area of ellipse starts with what a student already knows, and goes on to creatively crafting a fresh concept in the young minds. Done in a way that not only it is relatable and easy to grasp, but also will stay with them forever. Here lies the magic with Cuemath.

1.What is the perimeter of an ellipse?

2.What is the volume of an ellipse ?

A represents the length of the major axis.

B represents the length of the minor axis.

4.How do you calculate the area of an oval?

where \(a\), \(b\) are lengths of semi-major axis and semi-minor axis respectively.

\(a\) is the length of the semi-major axis i.e., distance from center to end of the major axis.

\(b\) is the length of the semi-minor axis i.e., distance from center to end of the minor axis.

6.Is circle an ellipse?

The circle and ellipse belong to the family of conic sections.

The ellipse is a squashed circle.

8.What is eccentricity of ellipse?

Eccentricity is denoted by \(e\).

\(c\) is the distance of focus from the center.

\(a\) is the distance of the vertex from the center.