What is Binary Addition?

Adding two or more binary numbers is one of the arithmetic operations on binary numbers or base-2 number systems. In decimal addition, when we add 3 + 2, we get 5. Similarly, when we add their binary equivalents, i.e (11)2 and (10)2, we get, (11)2 + (10)2 = (101)2, which is 5 in base-10. The results of both binary and decimal addition give us the same answer, the only difference is in the place values of the digits. The process of binary addition will look very familiar to you, the only difference is that in the decimal number system we regroup the next place value whenever we get the sum of the digits greater than 9 because in the decimal system we use 10 digits from 0 to 9. But while adding binary numbers, we regroup the next place value when the sum of the digits becomes greater than 1 as, in the binary number system, only two digits can be used, and those are 0 and 1.

The four rules that apply when two binary digits are added are given below: 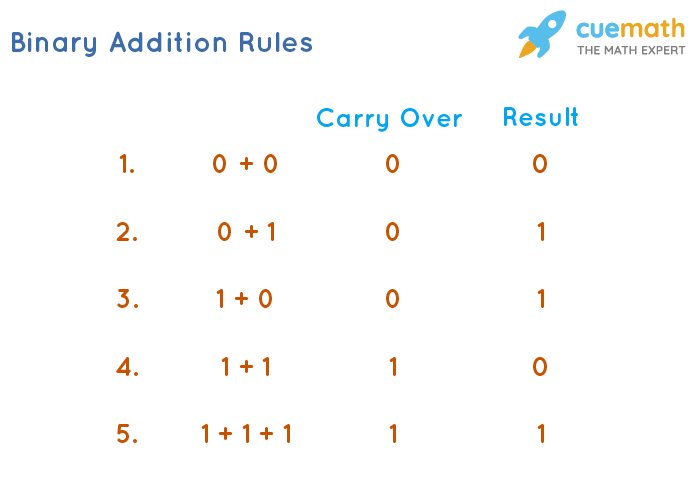 Now, let us use these binary addition rules to learn the process of adding binary numbers.

How to Add Binary Numbers?

Binary numbers are used in computers to store and represent data using digits 0 and 1. There are two cases that come up while learning about binary addition, and those are given below:

When the addition of two digits results in 0 or 1, then we don't need to regroup while adding two or more binary numbers. For example, let us add (101)2 and (10)2, which are the binary equivalents of 5 and 2 respectively.

Step 1: Write all the digits of both the numbers in separate columns as per their place values.

Step 3: Move to the next column to the left. Here, we have two digits 0 and 1. Look at the rules given above and find out which rule will be applied here. Apply one of the binary addition rules which says 0 + 1 = 1.

When the addition of two digits results in a number greater than 1, then we need to regroup while adding two or more binary numbers. For example, let us add (1001)2 and (111)2, which are the binary equivalents of 9 and 7 respectively. 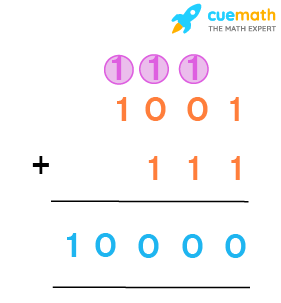 In the case of adding two negative binary numbers, first, we represent both the numbers in the 5-bit register by attaching the required number of zeros to the left. Then we find 1's complement of both the numbers and add the values. The end-around carry will be again added to the rest of the number. Note that in this case, we will always get a carryover digit. After adding, the 1's complement is to be found for the resultant number. That value with a negative sign will be the final answer.

Check out these interesting articles related to binary addition.

What are the Rules of Binary Addition?

There are 4 basic rules of binary addition which are given below:

How do you Add Binary Numbers Together?

It becomes very easy to add binary numbers if we know the binary addition rules given above. For example, if we want to add 10 to 11, we have to first start with the ones place digits of both the numbers. Adding the digits in ones place, 0 and 1, we get 0 + 1 = 1. Now, add the digits in twos place, which are 1 and 1. There are no more places to the left of the twos place in these numbers, so there is no need to take a carryover. As per the rule of binary addition, 1+1 = 10. So, the final answer of adding 10 + 11 is 101. This is how we add binary numbers together.

How do you know if a Binary Addition has an Overflow?

While adding two binary numbers if we get a number greater than 1, then we have to take a carryover to the next place value to the left. That is the case of overflow in binary addition, as we cannot have digits other than 0 and 1 in the binary system. Every number greater than 1 is expressed using 2 or more bits leading to an overflow.

How do you Add 4 Binary Numbers?

What is the Difference Between Binary Addition and Binary Subtraction?