The binary number system is a number system with base 2 in which numbers are represented only by two digits, 0 and 1. The smallest unit of data in a computer is called bit, which is the abbreviated form of 'binary digit'. A bit has a single binary value which is either 1 or 0. Binary numbers are written as \(110_{2}\), \(10_{2}\) and are mostly used in computers for programming or coding since the computer understands the language of only the binary digits, that is, 0 and 1. It should be noted that in a binary number, the bit to the extreme left is called the Most Significant Bit (MSB) and the bit to the extreme right end is known as the Least Significant Bit (LSB). The remaining part shows the magnitude of the number.

How to Convert Decimal to Binary?

To convert numbers from decimal to binary, the given decimal number is divided repeatedly by 2 and the remainders are noted down till we get 0 as the final quotient. The following steps show the procedure to understand the method.

Let us understand this with an example.

We will start dividing the given number (13) repeatedly by 2, until we get the quotient as 0. We will note the remainders in order. 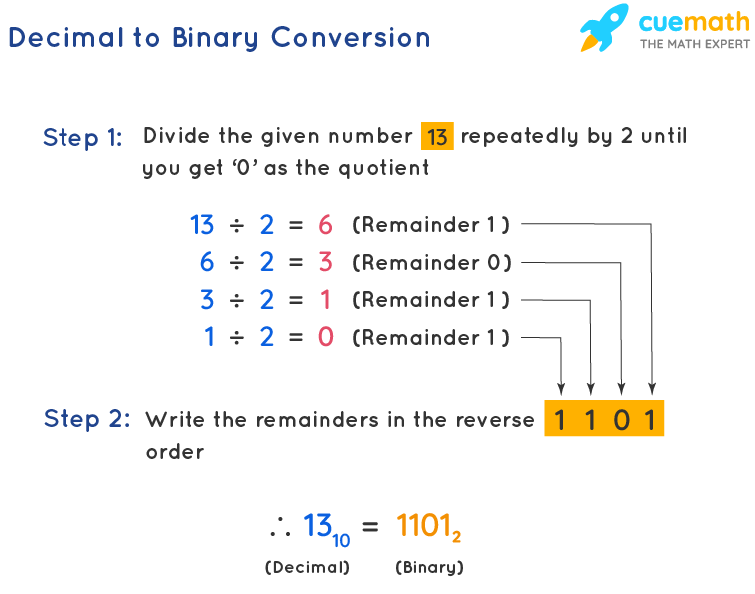 Related Articles on Decimal to Binary

Check out the following articles related to decimal to binary conversions.

Practice Questions on Decimal to Binary

FAQs on Decimal to Binary

What is the Purpose of Converting Numbers from Decimal to Binary?

Binary numbers are used for programming and coding in computers. Since a computer understands the language of binary digits, 0 and 1, numbers are converted from decimal to binary. When we do decimal to binary conversions, the base of the decimal numbers changes from 10 to 2.

What Does the Decimal to Binary Table Show?

How is the Decimal to Binary Conversion Done?

The simplest way to convert a decimal number to a binary number is by dividing the given number repeatedly by 2 until we get 0 as the quotient. Then, we write the remainders in the reverse order to get the binary value of the given decimal number.

What is the Decimal 254 in Binary?

List the Decimal to Binary Values of the First Ten Decimal Numbers.

The following list shows the first ten decimal numbers along with the corresponding binary equivalents.

What is the Binary Equivalent of the Decimal Value 97?