A Tangram is a puzzle or a tricky set of seven geometric shapes made up of two small triangles, one medium triangle, two large triangles (total five triangles), a square, and a parallelogram.

What is a Tangram?

A tangram is a Chinese puzzle made with the help of geometric shapes. Tangrams can be made by cutting colorful sheets into five triangles, a square, and a parallelogram. These seven geometry shapes can be merged to form several shapes. The seven individual tangram pieces are called tans. When the pieces of a tangram are arranged together they display an amazing variety of forms and personify many numerical and geometric concepts. Tangram pieces are broadly used to solve puzzles. All seven pieces can be fit together to form a square. Observe the following figure that shows a seven-piece tangram. 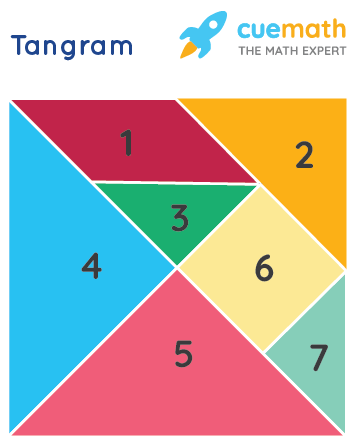 In the figure given above, the triangles with the numbers, 3 and 7 are equal and small as compared to the other triangles. Triangles with numbers 4 and 5 are large triangles and the triangle with number 2 is a medium triangle. The piece labelled as number 1 is a parallelogram and the one with number 6 is square. As we can see all seven pieces fit together and make a big square.

Why Do We Use Tangrams?

Like building blocks, tangrams can develop problem-solving and logical thinking skills, perceptual reasoning, visual-spatial awareness, creativity, and many mathematical concepts such as congruency, symmetry, area, geometry, and perimeter. They help kids learn geometric terms and develop stronger problem-solving abilities. Children can perform better in tests of basic arithmetic with the help of tangrams. There are over 6,500 shapes and pictures that can be created using a tangram puzzle.

Check out these interesting articles to know more about tangrams and its related topics.

A tangram is a puzzle that includes two big triangles, one medium triangle, two small triangles, one square, and a parallelogram. When all these shapes are joined together, it forms a square.

What is the Difference Between Tangrams and Pattern Blocks?

What are Tangram Rules?

There are some basic rules of tangrams that define its properties:

What is a Tangram Puzzle for Kids?

A tangram puzzle is a puzzle that is made up of 2 large triangles, 1 medium triangle, 2 small triangles, a square, and a parallelogram. All seven shapes form a tangram square, however, we can create different shapes out of them.

What are the Seven Shapes in a Tangram?

The list of seven shapes in a tangram is mentioned below: