The law of sines establishes the relationship between the sides and angles of an oblique triangle(non-right triangle). Law of sines and law of cosines in trigonometry are important rules used for "solving a triangle". According to the sine rule, the ratios of the side lengths of a triangle to the sine of their respective opposite angles are equal. Let us understand the sine law formula and its proof using solved examples in the following sections.

What is Law of Sines?

The law of sines relates the ratios of side lengths of triangles to their respective opposite angles. This ratio remains equal for all three sides and opposite angles. We can therefore apply the sine rule to find the missing angle or side of any triangle using the requisite known data.

The ratio of the side and the corresponding angle of a triangle is equal to the diameter of the circumcircle of the triangle. The sine law is can therefore be given as, 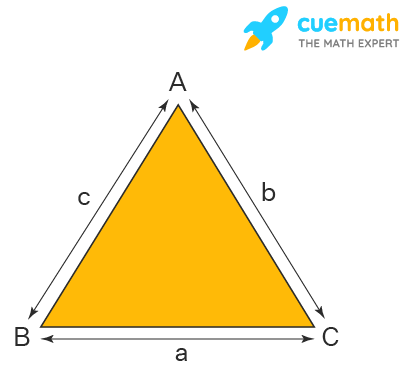 This formula can be represented in three different forms given as, 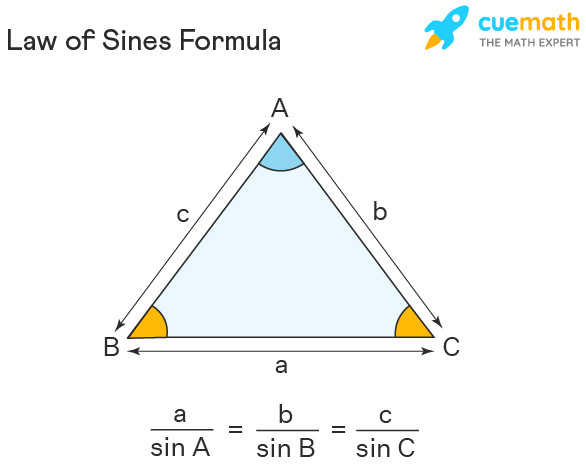 Proof of Law of Sines Formula

The law of sines is used to compute the remaining sides of a triangle, given two angles and a side. This technique is known as triangulation. It can also be applied when we are given two sides and one of the non-enclosed angles. But, in some such cases, the triangle cannot be uniquely determined by this given data, called the ambiguous case, and we obtain two possible values for the enclosed angle. To prove the sine law, we consider two oblique triangles as shown below. 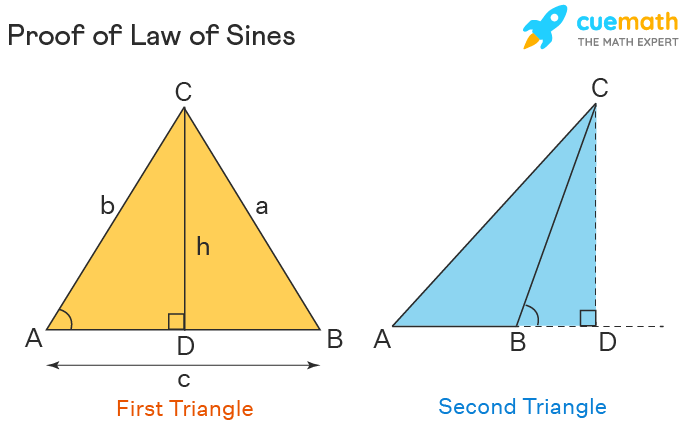 In the first triangle, we have:

In the second triangle, we have:

Equalizing the h values from the above expressions, we have:
a sinB = b sinA
⇒ a/sinA = b/sinB

Tips and Tricks on Law of Sines

The law of sines finds application in finding the missing side or angle of a triangle, given the other requisite data. The sine law can be applied to calculate:

Ambiguous Case of Law of Sines

While applying the law of sines to solve a triangle, there might be a case when there are two possible solutions, which occurs when two different triangles could be created using the given information. Let us understand this ambiguous case while solving a triangle using Sine law using the following example.

Think out of the box:

Find the angles of a triangle if the sides are 12 units, 8.5 units, and 7.2 units respectively.

Practice Questions on Law of Sines

What is Meant by Law of Sines?

When Can We Use Sine Law?

Sine law finds application in solving a triangle, which means to find the missing angle or side of a triangle using the requisite given data. We can use the sine law to find,

What is the Sine Rule Formula?

What are the Different Ways to Represent Sine Rule Formula?

Sine law can be represented in the following three ways. These three forms are as given below,

In Which Cases Can We Use the Sine Law?

The sine law can be used for three purposes as mentioned below,

Can Sine Law be Used on a Right Triangle?

What are the Possible Criteria for Law of Sines?

The criteria to use the sine law is to have one of the following sets of data known to us,

Does Law of Sines Work With 90 Degrees?

Yes, the law of sines and the law of cosines can be applied to both the right triangle and oblique triangle or scalene triangle to solve the given triangle.

What is the Law of Sines Ambiguous Case?

The law of sines ambiguous case is the case that occurs when there can be two possible solutions while solving a triangle. Given a general triangle, the following given conditions would need to be fulfilled for the ambiguous case,

What are the Applications of the Law of Sines?

The law of sines can be applied to find the missing side and angle of a triangle given the other parameters. To apply the sine rule, we need to know either two angles and one side of the triangle (AAS or ASA) or two sides and an angle opposite one of them (SSA).